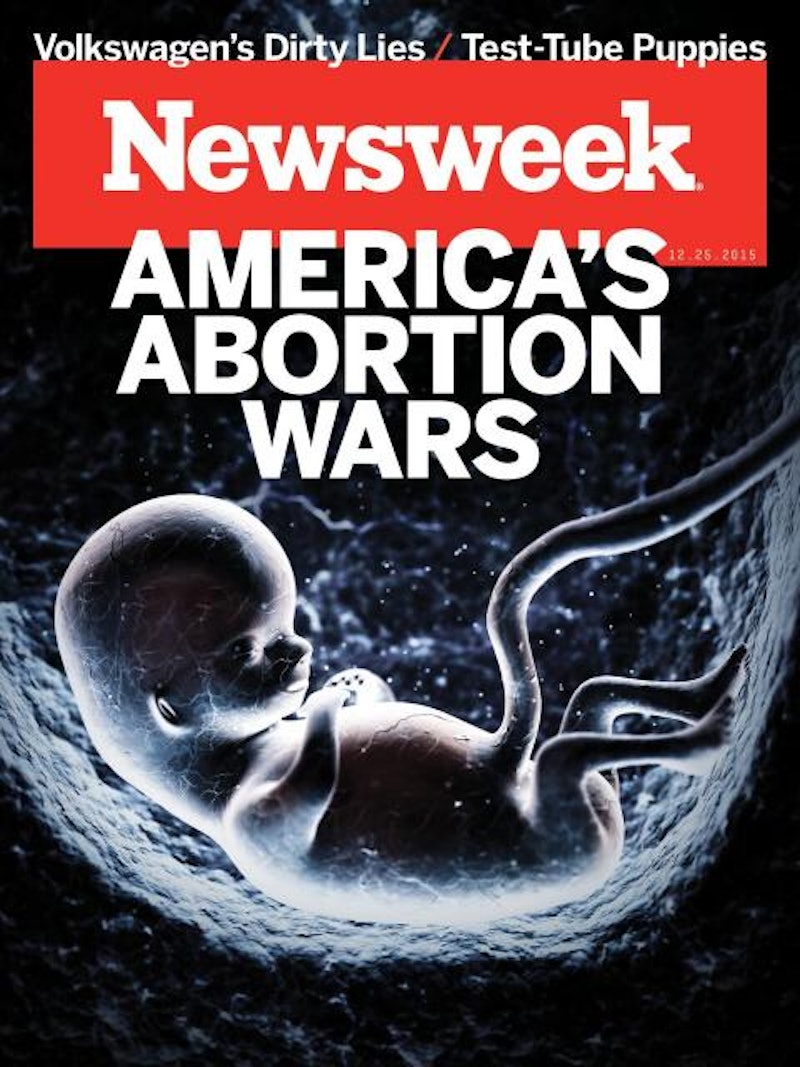 It's been a tumultuous week for reproductive rights — and it began with an ill-advised magazine cover pleading for an end to the "abortion wars." Newsweek came under fire this week when it revealed its latest issue: an illustrated second-trimester fetus for a story on abortion in America. As writer Sady Doyle put it in her criticism in Elle: "Everything is about the fetus, which is humanized, and the actual pregnant person is erased."

Here's what you missed in reproductive rights news this week...

If You Want Viagra, Here's How You're Gonna Get It

Abortion restrictions in South Carolina have become more stringent over the years, and include everything from mandatory waiting periods (at least 24 hours) and biased state-directed counseling to requiring doctors to ask patients to view the ultrasound image prior to the abortion. Yet for men seeking Viagra, restrictions are basically nonexistent. Should we be surprised? No, but let's at least give the men a taste of what it feels like to have to jump through the legislative red tape of Big Government to access medical care.

That's the idea behind a new bill in South Carolina, introduced on Thursday by state Rep. Mia McLeod. The bill essentially places the same restrictions on obtaining an abortion on getting Viagra: a 24-hour waiting period, a (mental) examination by a state-licensed sex therapist, and mandated sexual counseling. Oh, and the kicker: a sworn affidavit from a recent sexual partner confirming that the patient has experienced erectile dysfunction in the last 90 days.

The bill will never pass, but McLeod doesn't care. "I purposely tried to make it as invasive, as intrusive, as hypocritical and unnecessary as possible to make the point," she told NBC News.

The Ninth Circuit Court of Appeals decided not to hear a challenge to Arizona's racist abortion ban, which activists say legalizes racial profiling against Asian-American and African-American women seeking abortion. Known as the Susan B. Anthony and Frederick Douglass Prenatal Nondiscrimination Act of 2011, the law bans sex-selective abortions in the state. However, representatives from the American Civil Liberties Union and the National Asian Pacific American Women's Forum believe the law encourages racial profiling of certain women of color, and emphasizes that Asian-American and black women cannot make their own reproductive health decisions.

The Ninth Circuit dismissed the challenge on Wednesday in an unpublished opinion, stating that the law does not cause legal injury by perpetuating racial stereotypes and encouraging racial profiling.

"For generations, AAPI women and girls in this country have been subjected to laws that stigmatize and stereotype our community," NAPAWF Executive Director Miriam Yeung said in a statement. "By denying our members their day in court, the Ninth Circuit adds to this shameful legacy and lets unnecessary barriers to health care stand."

Who Has Abortions On TV?

Researchers at the University of California, San Francisco identified 78 television plotlines between 2005 and 2014 including women who are thinking about having an abortion; 40 of those plotlines, or 51 percent, ended with the female character going through an abortion procedure. According to the researchers, fictional television characters who obtained abortions were disproportionately white, young, wealthy and already child-free, whereas women of color, low-income women and mothers were desperately underrepresented.

While abortion narratives are gradually becoming a bigger part of the television landscape — with Scandal and Jessica Jones being the most recent reproductive rights-friendly shows — it's clear that these shows still aren't portraying the full and flawed reality of abortion in America.

More like this
10 Times Boris Johnson Got It Wrong On Trans Rights
By El Hunt and Sam Ramsden
Harry Styles Called For "Backlash" In Powerful Statement On Abortion Rights
By El Hunt
How The City Healed Five Years On From The Manchester Arena Attack
By Ella Glover
Plan C Vs. Plan B: What's The Difference?
By Lexi Inks
Get Even More From Bustle — Sign Up For The Newsletter