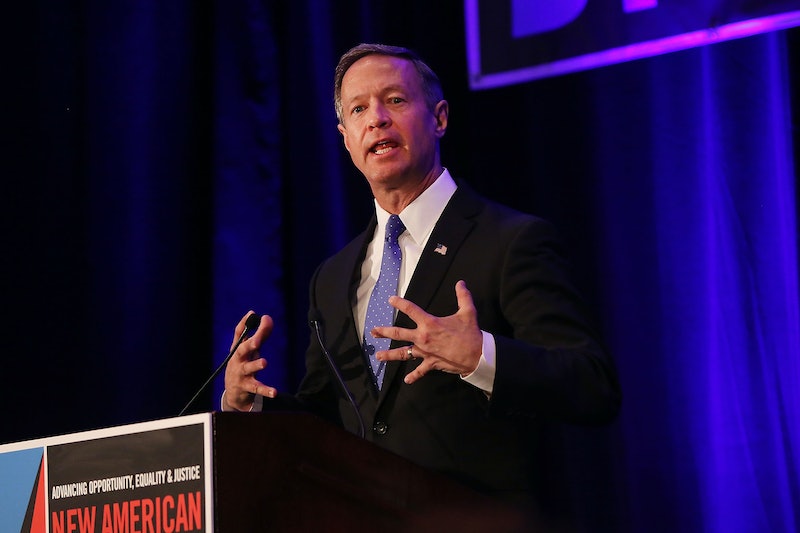 Poor Martin O'Malley. The presidential candidate has spent the majority of his campaign sitting quietly at the back of the pack while rivals Hillary Clinton and Bernie Sanders battle it out in the media. After the recent Sanders/DNC voter data scandal, it's likely O'Malley will fall even further into obscurity. Despite his lively showing during Saturday's Democratic primary debate, it seemed the only other thing working in O'Malley's favor was a slew of debate jokes scattered across social media, which perfectly encapsulated the former Maryland governor's lackluster run for the White House.

Luckily, they were all hilarious. "Democrats should have an undercard debate that's just two hours of Martin O'Malley talking to himself," BuzzFeed political reporter Andrew Kaczynski tweeted early in the evening. (Be honest — it'd probably be more interesting than the GOP undercard debate.) Added the outlet's snarky legal editor Chris Geidner, "The Dem undercard debate, which begins at 6p, is just Webb and Chafee crank calling O'Malley and asking him if he's free for dinner tonight." Ouch.

The hits kept coming throughout the rest of the debate. And hey, if you're worried about O'Malley's feelings — don't sweat it. The former Baltimore mayor is notoriously easygoing, and it's a safe bet he's made a few cracks at his own campaign in recent days.

Here are a few of the evening's best O'Malley jokes, in 140 characters or less:

Waiting For The Debate To Start

Even before the debate started, social media pounced on the 30-minute delay, making predictions about O'Malley's potential debate strategy and awkward third-wheel quips.

Social media was on fire within minutes of the candidates' opening statements, throwing shade and making snarky comments about his apparent lack of media coverage.

Weighing In On The Obvious

While Clinton and Sanders discussed the latter's feud with the DNC over the Clinton data breach, which ended with one Sanders staffer being fired on Friday, Twitter users threw a few hilarious punches in O'Malley's direction for sitting stagnant at the other end of the stage.

While the candidates pondered the United States' foreign policy directives, O'Malley seemed to get anxious waiting for his turn to talk.

Early in the debate, O'Malley took on the ABC News moderators, pushing for a chance to speak on gun control after it seemed he would be blocked out (again). Unsurprisingly, social media was over the moon with joy.

Social media users noted quickly that it seemed O'Malley was being shut out of the debate discussion altogether.

Short-Fused And Ready To Fight

While the ABC News moderators did eventually cede to O'Malley's wishes, doling out equal speaking time and probing questions during the second half of the night, the former governor's irritation with the overall debate structure (and sometimes his rivals' answers) was obvious.

O'Malley showed more life than ever before, but it seems that fire has come a bit too late. Compared to Clinton and Sanders, O'Malley looked like an extra on stage, ready to bow out.