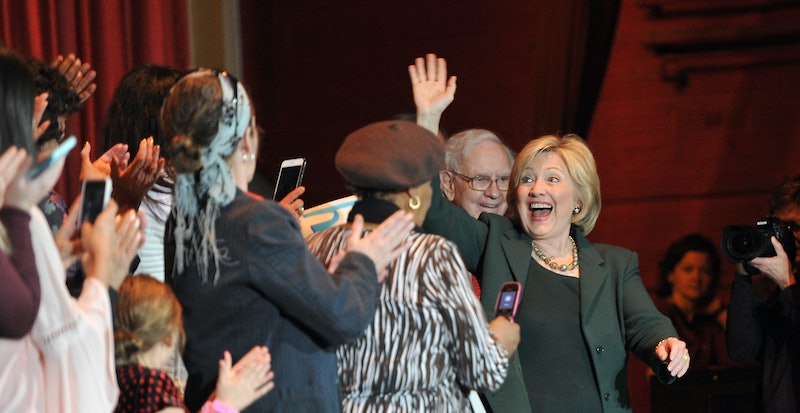 While Hillary Clinton competed on stage with her campaign opponents on Saturday night during the third Democratic debate, her fans and foes battled it out online, creating hilarious and truth-telling debate memes of Clinton based on the hot topics covered. Clinton talked about national security, health care, and the GOP throughout the debate, going up against Sen. Bernie Sanders and former Maryland Gov. Martin O'Malley. Hosted by ABC News, the debate was the final opportunity for the Democratic candidates to make their voices heard by the viewing public before the year ends — the next Democratic debate won't take place until Jan. 17.

Clinton isn't new to punchlines. Her email scandal earlier this year probably generated enough memes, jokes, and GIFs to cover all three of the remaining Democratic candidates combined. She's been impersonated on Saturday Night Live, and she has even appeared on the show to make fun of herself. Despite the jokes, though, she sits firmly at the top of the polls. At the time of the debate, Real Clear Politics marked Clinton at 25 points ahead of Sanders and more than 50 points ahead of O'Malley. At this rate, love her or hate her, she might just be the next Democratic nomination for president.