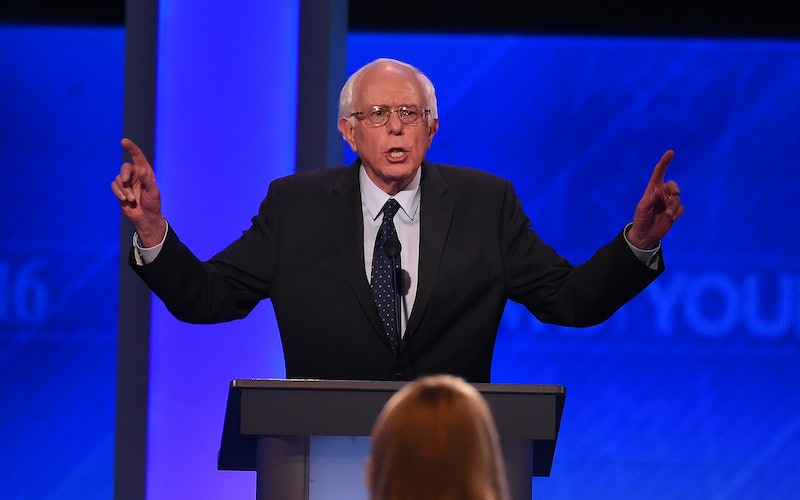 Hillary Clinton, Bernie Sanders, and Martin O'Malley faced off in New Hampshire on Saturday night, taking the stage for the third of six Democratic presidential debates on the 2016 campaign schedule. And compared to the last two, it was a considerably more contentious, lively affair. In fact, it probably had more raised voices, pointed criticisms, and tense moments than the other two combined, which is precisely why this one tweet summarized the third Democratic debate — Bernie was right, it did get pretty fun.

The moment came right after Sanders trumpeted the benefits of a single-payer health care system. In trying to respond, Clinton began talking over moderator David Muir to get her point across, arguing that Sanders would have to raise taxes on middle-class families to get that done, all while Muir tried to question her about her own tax plan. Clinton reiterated her pledge to not raise taxes on middle-class families, but during the resulting, chaotic cross-talk, Sanders chimed in with a little playfulness, saying simply: "Now this is getting to be fun."

Muir was inclined to agree, saying, "this is fun, this is democracy at work." You can see the moment below — for all the talk about Sanders being a little too humorless, his comedic timing on this one was pretty spot-on.

If there was any big reason this debate was more fun than the others, it was definitely the candidates’ noticeably increased willingness to flash some teeth. In the previous engagements, the amount of hands-off, good-natured respect and relative camaraderie between the candidates was glaring, especially considering the increasingly bitter, sometimes insult-laden debates that have drawn such huge ratings to the Republican side.

Even as the debate started on a moment of contrition from Sanders, as he offered a direct apology to Clinton for the data breach scandal that embroiled his campaign in the run-up to the debate, it quickly got combative — he proceeded to excoriate the Democratic National Committee for “arbitrarily” yanking his campaign’s access to the crucial voter database in response.

Martin O’Malley got into the act, too, although he didn’t lash out over the breach issue — he decided to play the “this argument isn’t helping average Americans” card, saying the conversation amounted to “listening to the bickering back and forth.”

More like this
Photos Of Boris Johnson Drinking At A Downing Street Lockdown Party Have Surfaced
By Bustle UK
10 Times Diana & Meghan Spoke Similarly On The Royal Family
By Sophie McEvoy
How The City Healed Five Years On From The Manchester Arena Attack
By Ella Glover
Twitter Is Upset About The 'American Idol' Top 3 Results: "Who TF Is Voting?"
By Jake Viswanath
Get Even More From Bustle — Sign Up For The Newsletter