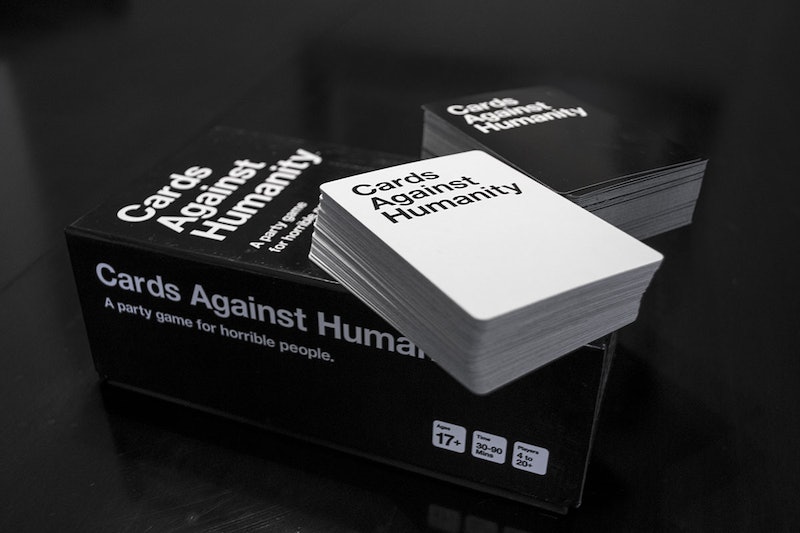 You've probably been to a party where someone has broken out a deck of Cards Against Humanity. It's known as the R-rated version of Apples to Apples — one player asks a question from their set of black cards, and the other players answer the question using whichever phrase on their set of white cards is funniest or most outrageous. The objective is to make your (probably drunk) friends laugh about the absurd intersections of sex, politics, and celebrity.

Now, screenwriter and political consultant Kate Stayman-London has started the Tumblr Ladies Against Humanity to bring a missing voice to the original game, which was created by a group of men. The site launched just last week, and has over 700,000 visitors and around 1,500 reader submissions.

“It makes me insane that women are still only 20 percent of writers in Hollywood, and still only get paid 80 percent as much as men. I hope people who read my blog say, like, ‘Wow. That was a f**ked up thing she said about tampons. I wish I saw more of that on television.'" Stayman-London told the Huffington Post.

Hilarious user-submitted cards, by both men and women include "The new Georgia O'Keeffe biopic, Yeah, That's Not a Flower", "What should I get my therapist for Christmas?" as well as "The New Sylvia Plath Cookbook." While the set is not endorsed by the original company, it's easily playable with a few printouts... Come on, "Meryl Streep selfies."

Have an idea for Ladies Against Humanity? Submit here!