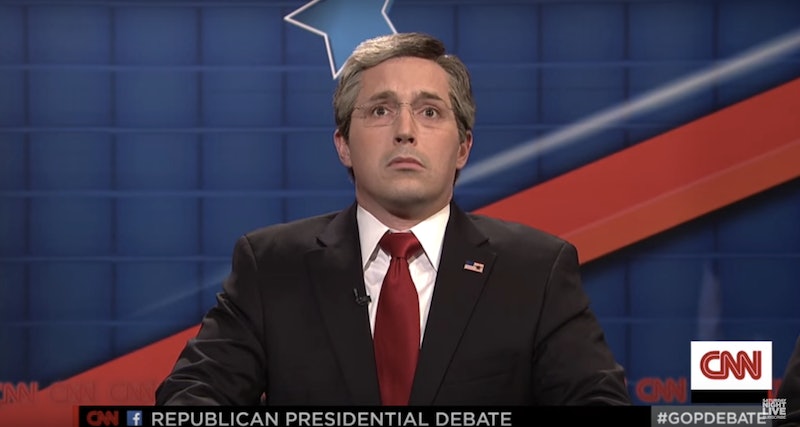 Poor Jeb! Bush. The guy's already facing down what looks for all intents and purposes like the end of his presidential ambitions, elbowed and bullied into political submission by Republican front-runner and billionaire boor extraordinaire Donald Trump, who sits atop a massively overstuffed primary field. And on Saturday night, he took a good ribbing on national television — SNL parodied Jeb Bush in a hilarious cold open, so if you've got the time, why not give it a look?

The cold open parodied CNN's most recent Republican presidential debate, which went down on Tuesday night. As usual, the real thing featured some major fireworks between Trump and Bush, and that's what serves as the essential cornerstone of the sketch. Make no mistake, it's a good one all around — the impressions are all on point, the jokes hit home, and each and every candidate represented on screen gets a little moment to shine.

But the yuks didn't get any more savage, nor ring any more true, than when Darrell Hammond's Donald Trump decided to pick on Beck Bennett's Jeb Bush, taunting him for his dizzying drop down the polls (which is true) and for being a "little girl" who "pees sitting down" (which, in addition to being a pretty cheap joke, is not).

The thing that makes the cold open so compelling is that, with the possible exception of the "you pee sitting down" line, none of this feels all that far from the realm of reality. The dilemma that Trump presents to Bush in SNL's spoof is more or less the exact same one that the genuine article does — no matter what he says or does, all his energy and momentum can seemingly be sucked away by simple, juvenile insults. It's understandable, in a way, considering Trump breaks all the rules of modern politics, and Bush has been playing by them for decades, but it's made for some devastating moments.

And some funny ones! Say what you will about Trump — braggart, racist, fascist, whole dismal litany of sins — there's something undeniably exhilarating about watching him throw aside each and every conventional wisdom about running for president, and it's even better to have top-notch comedy veterans like Hammond to play the part. Everyone else was pretty spot-on, too, with Jay Pharoah's sleepy, slithery Ben Carson impression deserving particular praise, especially when the camera cut back to find him sneaking a nap behind a pair of eyeball-lens glasses. SNL can be pretty uneven at times, but this one was a winner.