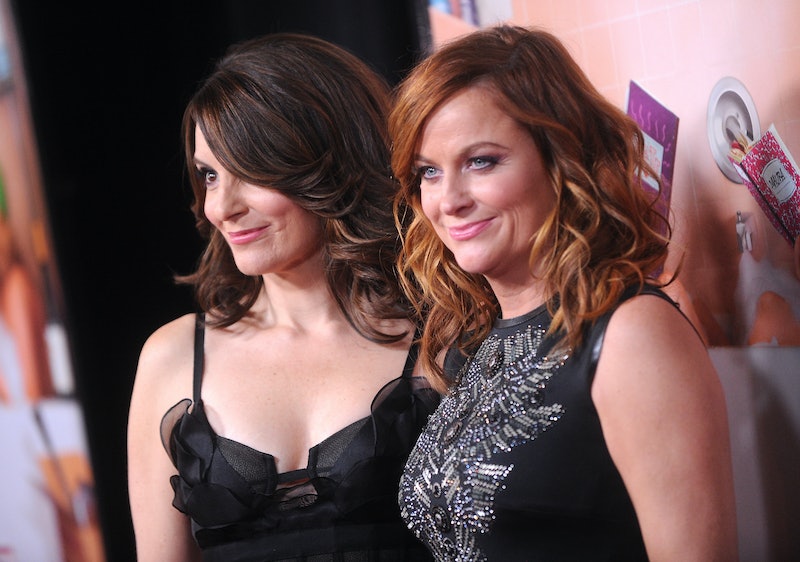 Seeing Tina Fey and Amy Poehler on Saturday Night Live is just warming my heart and making me laugh. Their Christmas-themed monologue was hilarious, and their game show sketch about young second wives was very thought provoking. But most of all, it was so great to see Tina Fey and Amy Poehler return to SNL 's Weekend Update desk, where they served as co-anchors during their tenure as SNL cast members in the early aughts. Current co-anchors Colin Jost and Michael Che welcomed Tina and Amy back to the set to let the dynamic lady duo tell the final jokes of 2015. And they did not disappoint.

Fey relayed the news/jokes about a school changing the lyrics to Christmas songs, while Poheler's bit was about the rise in Subway crime. Most of all, it was just amazing to get the news from these two awesomely funny ladies once again. Fey and Poehler reigned supreme in the Weekend Update chairs from 2004 until 2006 and they made the segment so fun during their tenure. It was also pretty historic — the only other female anchor of Weekend Update has been actress Jane Curtain, who sat in the chair from 1976 until 1980. It was a fact they mentioned during the SNL 40th anniversary special earlier this year.

Even though it would've been awesome to see Fey and Poehler take over and do all of Weekend Update, it was just great to see them back at the desk. Earlier in the episode, Fey reprised her old role as as Hillary Clinton and Fey stepped back into her flawless impersonation of Sarah Palin to meet up with Kate McKinnon's own Hillary Clinton. Just too perfect.