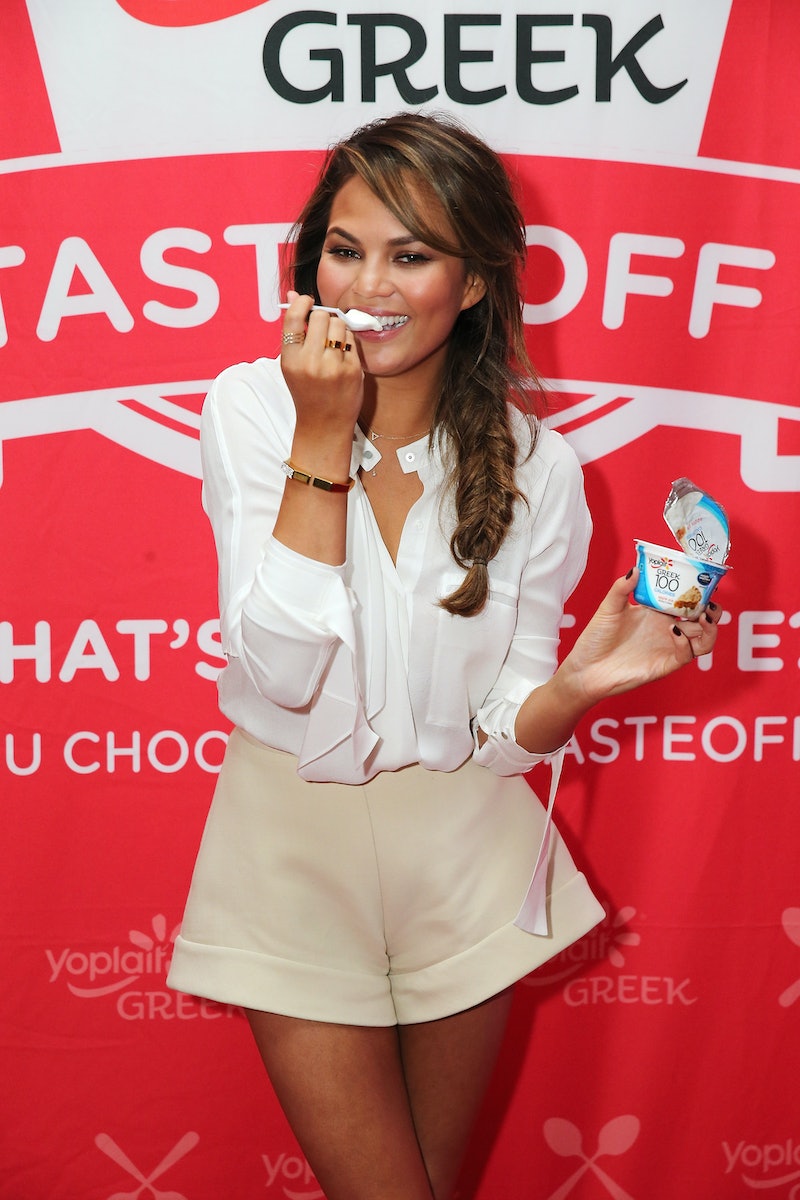 I'm about to divulge a deep, dark secret of mine, but don't read any further unless you promise you won't judge me for it. Okay, here it goes: 99% of the pictures on my phone are of food. That's right: I'm that girl who'll stand on a chair to get the perfect aerial shot of her avocado toast and won't let you take a bite of yours until I photograph it. Sometimes I feel uncomfortable scrolling through 17 concurrent photos of the same decorated latte, but then I remember that it's 2015 and people are naming their babies after Instagram filters. I'm merely tuned into the zetigeist. It feels like everyone loves a good old food-related Instagram, even A-listers, as these great celeb food pics from 2015 prove.

This year really helped give weight to what I like to call the "celebrity/chef", which is a term I coined just now for an already-famous person who wants to add "slash-chef" to their title. Stars using food as a brand extensions makes fiscal sense, certainly: If J.Law came out with her own hot sauce line, I'd be the first to push aside my Sriracha and try it out. But it seems like every other famous person these days is angling to have a "lifestyle expert" title through which they can sell cookbooks or launch their own line of artisanal cronut — and not all of them reach Gwyneth Paltrow or Bethenny Frankel-levels of success.

Luckily, you don't need to be a celebrity chef or a even "celebrity/chef" to take great food shots, so as the year winds to a close, I am proud to present the 15 most aspirational, over-the-top, Ina Garten-worthy Instagrams that celebrities posted of their food.

Obviously when you come to Bethenny's house, she's not just gonna plop down a brick of something packaged and be like, "The guy at Trader Joe's told me this was brie?" No. She's gonna serve six different types of cheese, labeled, on a tray she made herself with chalk paint.

I once heard that The Rock eats 10 pounds of food a day, and according to People, it's basically true; he eats 4,000 calories a day of mostly cod. So clearly the guy's in need of a good cheat meal.

If someone asked me what my goals are for the future, I would just show them this picture.

This dispatch from Babbo has so much cuteness going for it that an NYU student at Gallatin might end up citing it in a thesis one day, so for now I'll just say this: NPH takes so many pictures of food that he started a separate Twitter account for it, @NPHFoodPorn.

Sam and Megan, I don't know who you are, but bravo for knowing that the way to a Kardashian's heart (or anyone's, really) is through her brand's logo.

Here's everything that just blew my mind about this picture: 1. Oprah can grow a zucchini that's bigger than a small child. 2. Oprah owns a cow named Ivory. 3. Oprah knows how to make truffle fries. 4. Oprah sometimes or always harvests her vegetables in Terry Richardson-style glasses with no hint of irony whatsoever.

Obviously, if you're the GOOP queen herself, the phrase "when in Rome" means something other than throwing a coin in the Trevi fountain.

Even Hugh himself admits he barely took one bite of that. Rippling abs are made in the kitchen, not the gym.

Pure art from Los Angeles' award-winning Providence. She might be just a teenager, but that girl knows how to live.

What, you thought she was gonna grill up some hotdogs and drink PBR?

The fact that SMG made this cheese plate for her daughter is unquestionably sweet, but it must have taken a lot of time.

I've been neutral on this guy since he came onto the scene, but this picture alone converted me to the Hough side. So damn dapper! If only I could find a man in a white tux to eat mint chocolate chip ice cream with.

You might think a woman who pretends to fight crime professionally wouldn't be scared of a chicken. But you would be wrong.

I had a spontaneous Bloody Mary day, too, once. It did not look like that.

Jealous? So am I, friends. Let's all eat our crappy take-out together and salivate over these photos.

More like this
Move Over, 'Sunset'! The Drama-Filled Trailer For 'Selling The OC' Is Here
By Nola Ojomu
Nicola Coughlan Wants You To Appreciate Her "Indie Sleaze Era"
By L'Oréal Blackett and El Hunt
Gillian Anderson & Simone Ashley Are Also Thrilled About Ncuti Gatwa’s Doctor Who Casting
By Sophie McEvoy
Prince Harry Spoke Out About Archie & Lilibet’s Futures And What Worries Him The Most
By Sam Ramsden
Get Even More From Bustle — Sign Up For The Newsletter