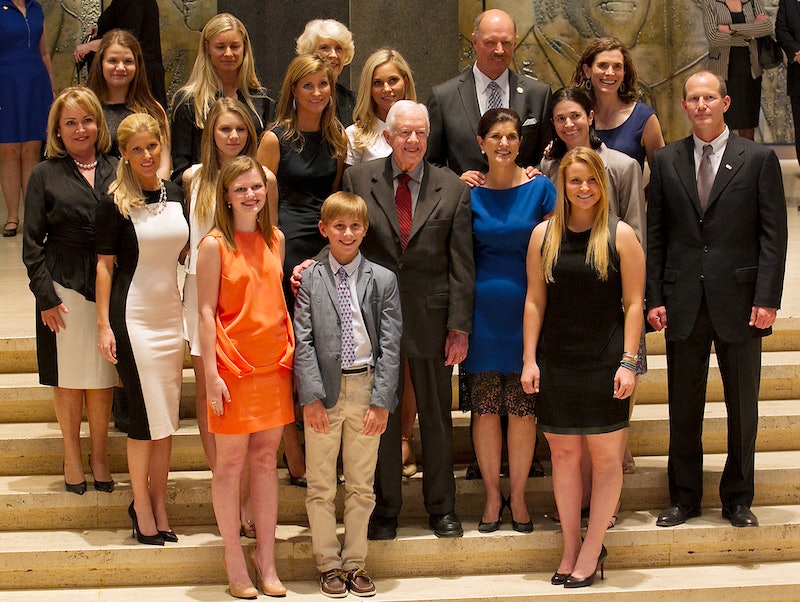 Former President Jimmy Carter sadly lost his grandson Jeremy on Sunday. Carter revealed the death of the 28-year-old while teaching Sunday school at Maranatha Baptist Church in Plains, Georgia. Jeremy had been complaining about not feeling well the day before and was taken to the hospital on Sunday when he died. The loss is undoubtedly a heartbreaking one for the humanitarian, who prides himself in just how close he is with is large family. Jimmy Carter's quotes about grandchildren further illustrate just how deeply he cares about his extensive family as well as the value of being close to his relatives.

Jimmy's passion for being a grandfather is what inspired him to sign a presidential proclamation in 1978 establishing the first Sunday after Labor Day as National Grandparents Day. The former president's reasoning, as detailed in his proclamation, settled firmly on strengthening "the enduring values of family." Family has been a consistent focus for Jimmy as well as his wife, Rosalynn, and the two continue to inspire their own grandkids. Jimmy's political career is what got his grandson, Jason, interested in politics. The former senator even mounted a run as governor of Georgia in 2014. Though he was unsuccessful, Jason had the support and blessing of his grandfather.

On What He Loves Most

Jimmy left office in 1981 and has since devoted himself to many humanitarian efforts, specifically founding Habitat for Humanity. Family, however, has been his top priority ever since marrying Rosalynn in 1946. In an interview with CNN's Jake Tapper, Jimmy detailed the ways he stays content in retirement, praising Rosalynn for being the "foundation for my entire enjoyment of life." Jimmy continued:

We have a lot of good times. We have a big family now. We have 22 grandchildren and great-grandchildren, 38 of us in all. So, we try to hold our family together and just enjoy the family life.

The 91-year-old has been repeatedly asked about staying spry in the face of old age. Carter says that he can credit his grandchildren for offering fresh viewpoints as well as his position teaching at Emory University. He told The Washington Post that even if he is no longer well, he'll be taken care of because he and his wife "have our family. We have a lot of love." Jimmy continues:

I have been a college professor for 31 years at Emory University. I am in touch with young people nearly every day. I have great-grandchildren that are 1 and 2 all the way to my children who are nearing retirement age. I am around a lot of different perspectives.

Some of the most prolific statements about grandparents' special relationship with their grandchildren came from Carter's 1978 presidential proclamation. The former president has stayed true to his attitude that the younger relatives of his family can teach him so much and vice versa, as indicated by his passing of National Grandparents Day. Jimmy wrote:

Because they are usually free to love and guide and befriend the young without having to take daily responsibility for them they can often reach out past pride and fear of failure and close the space between generations.

Jimmy's grandson has always been a major influence in his grandchildren's lives, especially Jason's. When the former Georgia senator announced that he was running for governor, Jimmy expressed his enthusiasm as well as support while also being conscientious of Jason's goals as a candidate. Though the two politicians and family members differ, Jimmy nonetheless praised the path that Jason had taken. Jimmy said:

[Jimmy's done] great things for Georgians through his service in the state Senate and volunteer work throughout the state... [Georgia could] greatly benefit from a smart and fresh leader focused on improving our schools, creating opportunities for a more prosperous middle class and restoring a sense of trust and transparency back to state government.

Jimmy's grandson James' path in politics has been one of accountability. James unearthed the tape of former GOP presidential candidate Mitt Romney uttering his infamous 47 percent comments. When Jimmy got word of James' expert sleuthing as well as the many opportunities being sent his way, the former president sent his grandson a simple and sweet email showing his support. The message read, in part:

This is extraordinary. Congratulations! Papa