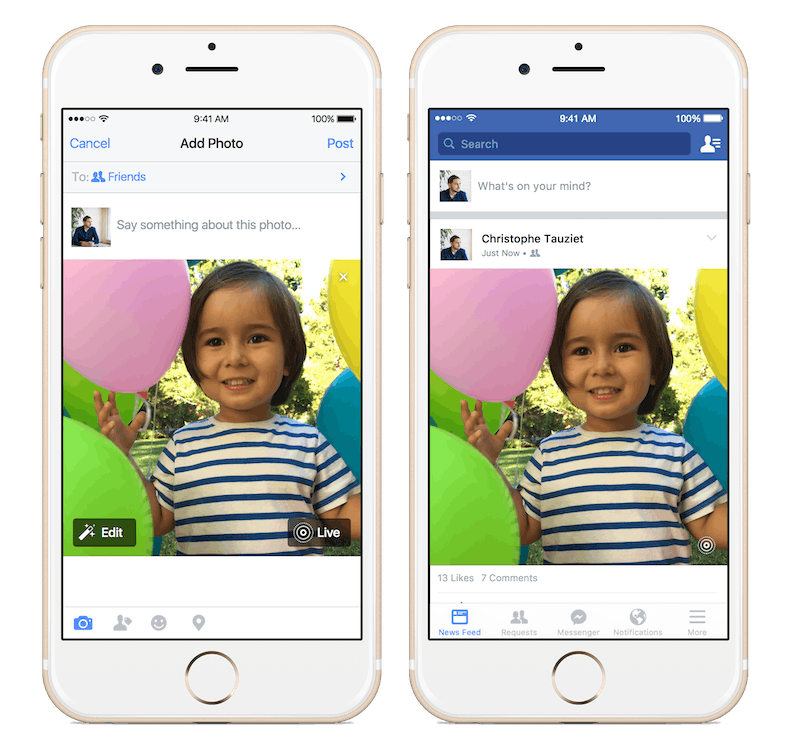 Your Facebook profile is about to get a lot more animated — starting Monday, Facebook will begin supporting Apple's Live Photos to instantly upload your moving photos onto your Facebook page for all to see. Not only can your uploaded pictures be displayed as a kind of three-second movie, but your profile picture also can be animated as well.

The Live Photos integration should be a huge success in terms of profile innovation. GIFs are a completely ubiquitous media now and the ability to instantly post your moving photos on Facebook should be insanely popular. So far, Live Photos have caused more of an industry stir than consumer excitement, but the announcement should give iPhone users a delight for a new use for their Live Photos. Facebook released a similar profile video feature earlier this year that didn't gain much traction, but the seamless integration into Apple's software should provide a huge boost to the popularity of the moving profile picture.

The new feature will be available for a small number of people across the globe from Monday, and will expand in the new year with the goal of eventually reaching all of Facebook's users.

Live Photos are a combination of a still picture and a video that extends 1.5 seconds before and after the picture is taken. Although they take up about twice the memory capacity as a regular still photo, Apple's integration of the feature into social media apps is giving consumer serious incentive to take advantage of Live Photos. Tumblr has already integrated Live Photos onto its iOS app, and other social media sites are sure to follow.

Arguably, the best part of the new Facebook feature is the simplicity — uploading a Live Photo is hardly any different than posting a regular picture. If you get access to the feature in the initial roll out, simply follow these three steps to post your Live Photo.

There's no word yet on whether the Facebook Messenger or Instagram apps will support Live Photos, but Apple has such a huge market share on smartphones that it shouldn't be long before Live Photos are supported across all of Facebook's software to draw even more users onto the apps. Facebook also has not released an estimation of how many users will gain access to the feature, but Facebook reached over 1.5 billion monthly users in the third quarter of 2015, so even a "small percentage of users" could be upwards of a few million people. There's a solid chance you or one of your Facebook friends will be able to post Live Photos in the initial roll out. In the meantime, there are some burgeoning apps to trim and edit your Live Photos so you can perfect the medium before the feature gets a wide release.

Live Photos are available on every Apple device that supports iOS 9, so iPhone 4 is out of luck, but every other widely used Apple product supports the feature. The holidays are sure to bring some great picture opportunities, so turn on that Live Photos feature and get snapping before Facebook launches the roll out — you'll have the best profile online.