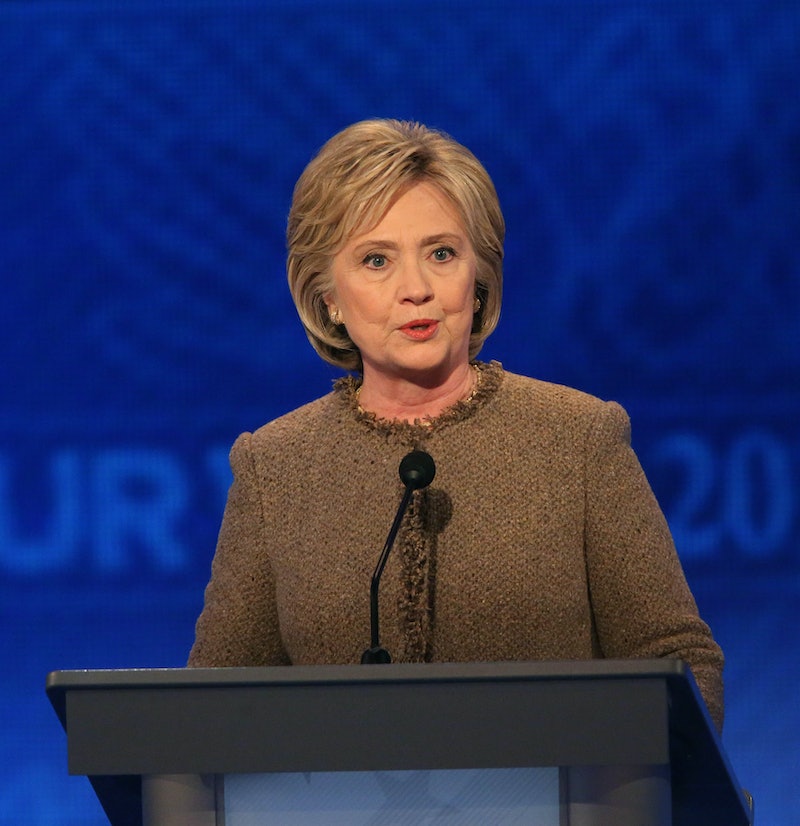 On Saturday, Hillary Clinton delivered a memorable performance during the third Democratic debate in Manchester, New Hampshire (and it wasn't just because she showed up to one of the segments late). The current Democratic frontrunner reiterated her vast experience with foreign policy and her priorities for continuing the work that the Obama administration has put in place. She made at least one important mistake, though: Clinton's claim that ISIS uses Donald Trump for recruiting videos came off as underhanded as a similar mistake made by Republican candidate Carly Fiorina at a previous debate.

Saturday's debate, hosted by ABC News, focused largely on national security, a hot topic thanks to recent tragedies like the ISIS-inspired attacks in Paris and San Bernardino, California. The three remaining Democratic candidates for president — Clinton, Sen. Bernie Sanders, and former Maryland Gov. Martin O'Malley — were asked about their proposed plans for handling ISIS and the ongoing conflict in Syria. In her response, Clinton emphasized not just what approach she'd take abroad, but also what she thinks needs to be done at home, implicating the outspoken Republican frontrunner.

We also need to make sure that the really discriminatory messages that Trump is sending around the world don't fall on receptive ears. He is becoming ISIS's best recruiter. They are going to people, showing videos of Donald Trump insulting Islam and Muslims in order to recruit more radical jihadists.

There's no doubt that Trump's controversial rhetoric about Muslims is problematic, but Clinton's claim that ISIS is actually using Trump as a tool for recruitment seems a little outrageous — and people have noticed. Trump himself called Clinton a liar on Sunday's edition of NBC's Meet the Press.

Nobody has been able to back that up. It's nonsense. It's just another Hillary lie. She lies like crazy about everything, whether it's trips where she was being gunned down in a helicopter or an airplane, she's a liar and everybody knows that. But she just made this up in thin air.

Similarly, the well-known fact-checker Politifact was unable to find any evidence that ISIS is currently using Trump's likeness to recruit sympathizers. Yet, in the same episode of Meet the Press that Trump appeared, Clinton's campaign chairman, John Podesta, spoke to host Chuck Todd in an attempt to clear things up for Clinton, while reaffirming that she stands by the comment.

Well, look Chuck, your own network ran a piece citing the most important organization that follows ISIS on social media that said that they are using social media, that they are using Donald Trump as a recruitment tool. So that's what she was referencing and that's the interpretation we made. And I think that if you look at what is going on in the Middle East, the fact that Mr. Trump is on television over there all the time, the fact that ISIS is using him as a recruitment tool, I think it is a very fair charge.

That's fine... except it's not a very fair charge if it's not supported by evidence. Sure, Trump's rhetoric is offensive and potentially helpful for ISIS' narrative. But, it's possible to voice that concern without getting into specific allegations like Clinton did. Ultimately, Clinton's hastiness to provide a compelling sound bite landed her in the same trap that her Republican counterpart, Fiorina, fell into back in September.

At a debate of her own, Fiorina cited a video that she claimed showed an abortion of a fully-formed fetus.

Anyone who has watched this videotape, I dare Hillary Clinton, Barack Obama to watch these tapes. Watch a fully-formed fetus on the table, its heart beating, its legs kicking, while someone says, "We have to keep it alive to harvest its brain." This is about the character of our nation.

Fiorina immediately received backlash for the comment. Challengers alleged that such a video didn't exist, or at the very least, that it didn't show an abortion. In the end, it seems that the video she referenced does exist, but it's unclear what anyone says in the video and it's unclear if the procedure in question was an abortion or a miscarriage delivery. Thus, it was an exaggeration of the same nature as Clinton's.

It's no secret that Clinton opposes pretty much anything Trump and Fiorina say. In this case, she was right to speak out against Trump's anti-Muslim rhetoric. She missed the mark in her particular delivery, though, as she came off as no more honest than her female contender on the Republican side.

More like this
How To Support Gun Control Reform Right Now
By Morgan Brinlee and Carolyn Steber
Everything To Know About ‘The Handmaid’s Tale’ Season 5
By Amanda Whiting
Yes, Billboard Queen Angelyne Really Ran For Governor Of California
By Brad Witter
The Church Of Scotland Votes To Allow Same-Sex Marriages
By Sam Ramsden
Get Even More From Bustle — Sign Up For The Newsletter