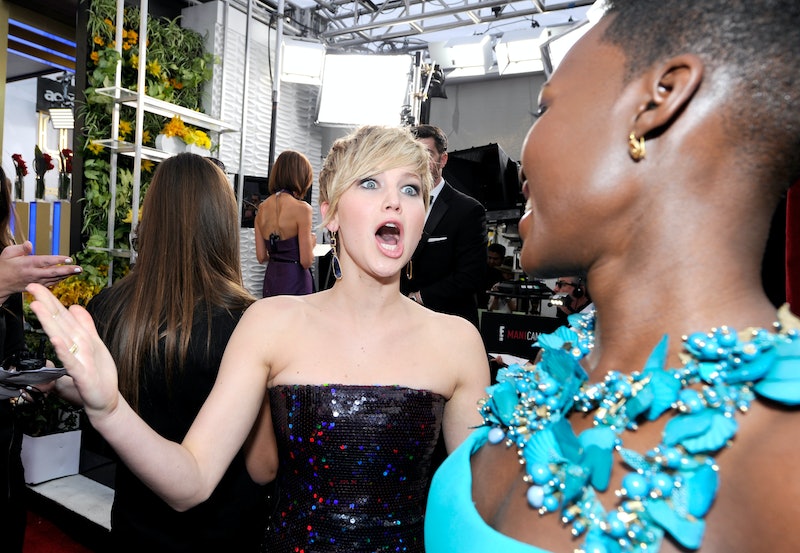 There's a ton to say about Jennifer Lawrence's wit, charm, beauty, candor, and armpit vaginas — but perhaps her on-again boyfriend, Nicholas Hoult, summed up her talent and ease when the usually-private actor broke the silence about his relationship with her.

"She deserves it all," Hoult said on Jan. 18 at the Sundance Film Festival about Lawrence, who's up for her second Oscar this year for American Hustle. "It's fun to watch." He also said that they both read the script for his upcoming film, Equals, with Kristen Stewart. Hoult and Lawrence "both loved it." He was at the festival, however, to promote his new film, Young Ones.

Awww. We love a man who can sweetly express his adoration for his girlfriend, and even moreso when the fun-watching includes frank interviews about her flatulence, gracefully falling onstage, and an open love of food. What's not to love — really?

Hoult and Lawrence were co-stars in X-Men: First Class in 2011, and started dating in 2010 but broke up in January of 2013. They're both in the sequel, X-Men: Days of Future Past, out on May 23. The charming couple made their first "official" public appearance as an on-again couple at this year's Golden Globes, where Lawrence won best supporting actress and planted a big ol' smooch on Hoult before she went onstage. They were also seen taking cute selfies together at their table — and a couple that selfies together stays together.

It just goes to show, there are Prince Charmings out there who will happily ride off into the sunset with us — mozzarella sticks, pizza, and beer in hand.

You can watch Lawrence's Golden Globe win below (even though half of their kiss is obstructed by men in suits):

More like this
5 Wild Theories About Miley Cyrus’ “Flowers” Music Video
By Jake Viswanath
Vanessa Hudgens Is Reportedly Engaged To Cole Tucker
By Jake Viswanath
Pamela Anderson’s Dating & Marriage History Could Be Its Own TV Series
By Jake Viswanath
Keke Palmer Shares The Sex Of Her & Darius Jackson's Baby
By Jake Viswanath
Get Even More From Bustle — Sign Up For The Newsletter
From hair trends to relationship advice, our daily newsletter has everything you need to sound like a person who’s on TikTok, even if you aren’t.