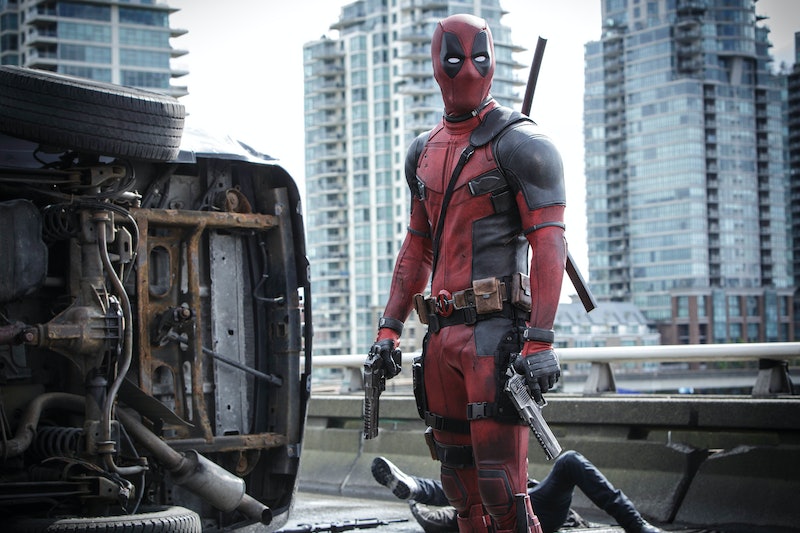 I really do believe that Marvel genuinely goes around the world and goes, "The goal here, gentlemen, is to find someone who is this character so that they don't have to do much acting." Either that, or Ryan Reynolds is just having way too much fun getting into the mind and spirit of Wade Wilson as production of Deadpool continues underway. That's the only explanation I can come up with for why Ryan Reynolds tweeted the Deadpool script — or, rather, a page there of, that was covered in doodles and words that are probably the first ones that Deadpool ever learned to say as a child. It was part of his ongoing promotion called #12DaysOfDeadpool and, let me tell you, if I wasn't already going to watch this movie, then I would watch it for the Deadpool Christmas card that Reynolds also tweeted out alone.

The Deadpool movie is described as being about "a former Special Forces operative turned mercenary is subjected to a rogue experiment that leaves him with accelerated healing powers and adopts the alter ego Deadpool." As anyone who has watched the red band trailer for the film can tell you, that alter ego is a foul-mouthed, sociopathic anti-hero that you just have to love for how, quite frankly, outrageous he is. Deadpool is the kind of guy who says the things that you wish you could say, as colorfully as you wish you could say them, and it's very, very clear that Reynolds is having way more fun than he really should be having playing the character. (Or just enough, really.) I mean, really, look at this script page.

The page features a showdown between Deadpool and Colossus, in which Deadpool reacts to the release of a prisoner with an attempt at violent retribution that goes very, very wrong for him considering this is Colossus he's trying to injure. Let's just say that it's lucky he has accelerate healing. But even better than the script excerpt are Reynolds' notes, such as when he notes "Oooh... I'm pounding Colossus in the bum rush :)," and when he simply writes "Orlando Bloom-ing onion," complete with a doodle of an onion for reasons that I can't even begin to explain. Really, this script excerpt has something for everyone, which is probably why fans are literally losing their minds. I know I am.

And if that script wasn't enough for you to firmly believe that Marvel literally picked the best actor for this job long before it was announced he was getting his own spinoff, then I present into evidence Deadpool's Christmas card, which was also tweeted out by Reynolds over the weekend. Not only is the image depicted hilarious, but Reynolds makes fun of people who can't read the small type of the tweeted photo, claiming that they should have signed up at Deadpool.com if they wanted to get a good look at what the mercenary actually wrote on the Christmas card. Which, again, is exactly what I imagine Deadpool himself would do if he was the one promoting his own movie.

At the end of the day, I kind of love the promotional game that Deadpool and Ryan Reynolds are bringing. It shows off the hilarious sense of humor that the actor has always had, and this could be the film that truly puts Reynolds back on the superhero map years after the box office bomb that was Green Lantern. Even if no one watches the movie, I'll be seeing it several times based on this promotion alone.