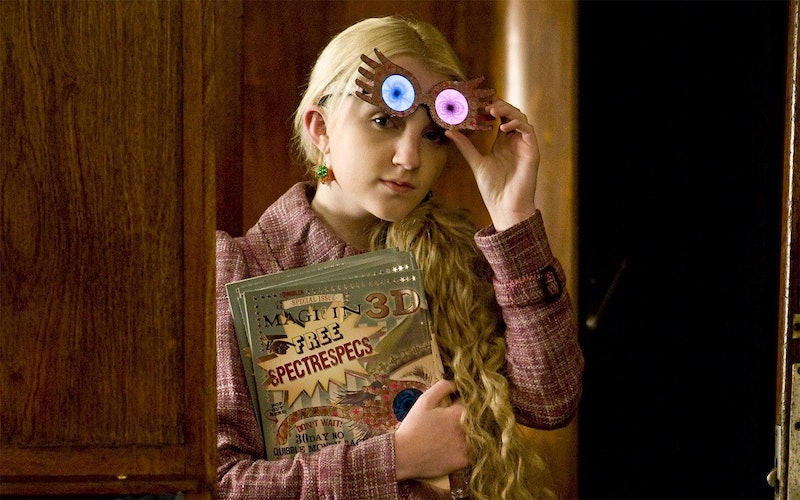 I love making New Year’s resolutions. First of all, I’m a very goal-oriented person, so writing down exactly what I want to accomplish is second nature anyway. Second of all, I’m constantly scribbling to-do lists on whatever paper is available, so I love crossing things off the “master list.”

The problem is, sometimes I get so caught up in setting goals, that I forget what resolutions are really supposed to be about. Sure, they’re a great motivator, but instead of pushing myself to accomplish more and more, this year I decided to make some resolutions to push myself to become a better person. And as my dad says, resolutions can only apply to something you can change or begin, because you can’t control the actions of other people. Unless, of course, you’re using the Imperius curse, in which case you probably need to make quite a few resolutions.

Ah yes, curses. That brings me to Harry Potter, as most things do. Because I decided, who better to inspire some great New Year’s resolutions, than some characters from my favorite series?

Harry Potter is chock full of great characters with qualities to emulate, so I decided to flip through the pages and find some ideas from my favorites. If I were to pick one resolution inspired by several of my favorite characters, what would they be?

1. Read As Much As Hermione

Hermione's a fountain of knowledge, but that's partially because she reads so often (as she encourages Harry and Ron to do also, to no avail). This year, make a dent in your TBR pile, or take on that classic you've always been meaning to read.

2. Take Your Cue From Dobby And Give More Compliments

Though he sometimes went overboard, Dobby the house elf wasn't afraid to dole out compliments — especially to his favorite person ever, the great Harry Potter. Take time to tell the people you love exactly how much you love them... though maybe skip putting up decorations with your friend's face on them. Unless they're into that, in which case, have a very Harry Christmas.

Fleur was the only female competing in the Triwizard Tournament, and Hogwarts wasn't exactly her home turf. When she and Bill first got together, his family didn't approve. She had plenty of obstacles between herself and her goals, but did Fleur let that get her down? Nope. She was confident (perhaps overly so) and went after what she wanted, a great quality you should emulate this year.

4. Be As Loyal As Ron Weasley

You never know what a year will hold for you or your friends. They might be accused of being the heir of Slytherin, or you might be named Prefect instead of them. Whatever happens, resolve this year to be as loyal and as true a friend as the thing Harry Potter would miss most — Ron Weasley.

5. Find Your Passion Like Fred And George... And Neville

Fred and George worked hard to create their own wizarding joke shop. Though a lot of people thought they were only capable of messing around — "'We've been hearing explosions out of their room for ages, but we never thought they were actually making things,' said Ginny, 'we thought they just liked the noise'" — Fred and George were actually pursuing their passion, and working hard to do it. This is a quality they shared with often-overlooked Neville Longbottom. He was actually a whiz at herbology, and studied hard to perfect his green thumb. So be like the Weasley twins and everyone's favorite underdog, and follow your passion this year.

Did you know that owning a dog can give YOU health benefits, such as better cardiovascular health, lower blood pressure, and a milder response to stress? While I doubt that any of Hagrid's pets lowered people's stress levels, he was onto something by spending so much time with animals. Spend some time pet sitting, or volunteer at a local animal shelter, or even adopt a pet of your own this year. Name suggestion: Norbert... a?

Maybe Sirius would've texted Harry if he had the option, but I like to think that he'd still stick with good old-fashioned letter writing. Think of how important it was to Harry each time he received a letter... you could make someone's day, too, by sending them a handwritten note by owl post. Or, you know, stick it in your mailbox. Whatever works best.

A good pair of socks and some lemon drops were sure to bring a smile to Dumbledore's face. He was usually dealing with a lot, but the wisest character of HP always savored the small things, making every moment count.

Have you ever been shopping, seen an outfit you love, but said to yourself, "nah, I could never pull that off... " Well, this is the year to tell yourself that you CAN. Luna was known for her wacky outfits, from radish earrings to spangled silver robes, and she wore them with such confidence that you couldn't help but admire her. Because if the outfit makes you happy, that's what really matters.

Chocolate might help prevent memory decline, lower cholesterol levels, and restore your happiness after dementors pass through. So you should probably eat more of it.

Everyone's favorite mum has plenty of amazing qualities to emulate. If you're a parent, you can certainly pick up tips from her. But one of my favorite things about Mrs. Weasley is how she makes the best of every situation she's in. She's incredibly resourceful (wherever she is seems like home), and that count-your-blessings attitude would make a great resolution to follow.