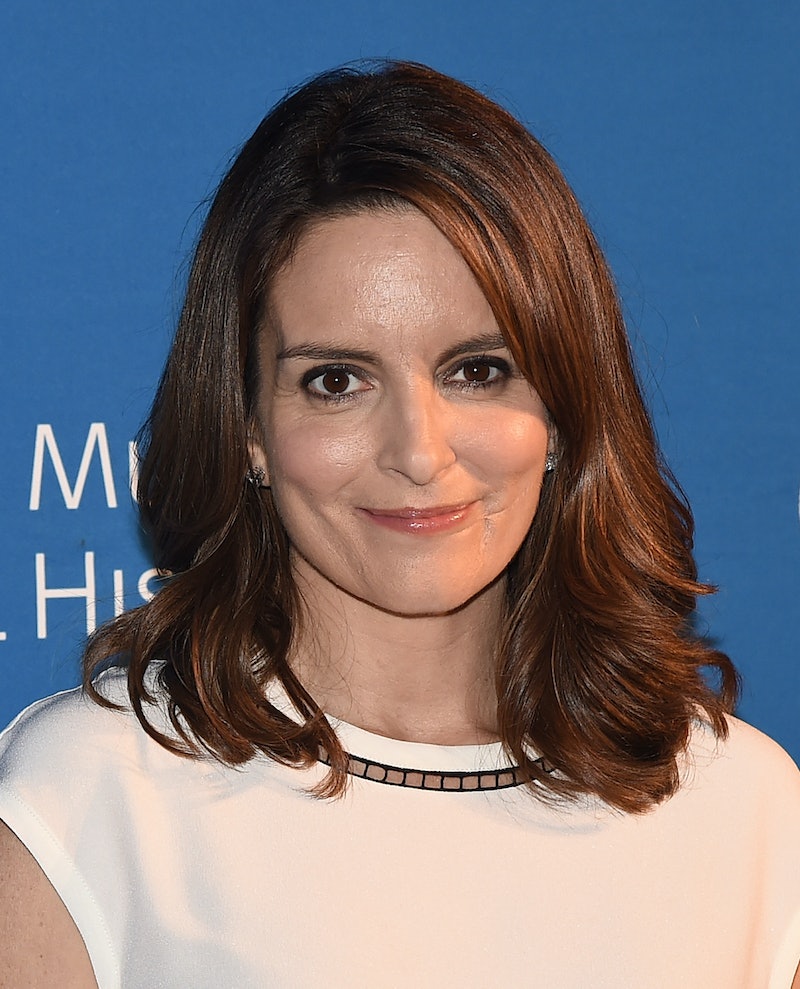 Part of the reason why I (and so many others) are still obsessed with Mean Girls more than ten years later is because it's so similar to what the high school experience is really life. But if Regina George and the Plastics are a little too close to what your own teenage bullies were like, there might be a good reason for that: They were written by someone who has been there. In a recent interview with The Edit, Tina Fey admitted that she used to be a mean girl herself when she was younger because of her own insecurities, as a way of coping with all those crazy, confusing emotions that come with being a teenage girl.

As Fey told the mag:

I was [a mean girl]. I admit it openly. That was a disease that had to be conquered. It's another coping mechanism — it's a bad coping mechanism — but when you feel less than (in high school, everyone feels less than everyone else for different reasons) in your mind it's a way of leveling the playing field. Though of course it's not. Saying something terrible about someone else does not actually level the playing field. If I meet a girl of 14 or 15 today who is that kind of girl, I am secretly, in my body, afraid. Even though I'm 45.

There's a lot of truth here. Stressing out about being "good enough" was a big part of my own teenage experience, and I have a feeling I'm not alone in that. In fact, in some ways, those feelings might never go away, like the Sisters star says. But there's only one problem: Fey's old mean girl habits may not have actually ended when her high school career did. Although she labels herself as a feminist — and through Mean Girls, 30 Rock, and Unbreakable Kimmy Schmidt, has done so much for women, especially women in comedy — Fey still knocks other women down, especially if they lead a lifestyle she doesn't agree with.

Prime example? This 2010 clip from Saturday Night Live's "Weekend Update." As Death and Taxes originally pointed out, Fey calls herself a feminist but, unfortunately, also calls a lot of other women whores.

In the segment, Fey is defending Sandra Bullock, which is good, but also tearing down all kinds of women who don't subscribe to the kind of ideals that apparently make you a "good person," whatever that is. Her idea of "losers" include women who have tattoos and women who work at Hooters, and it's a serious bummer to hear her talk about them that way, especially as a longtime Fey fan and supporter. Add this to the fact that she also makes fun of Taylor Swift at every opportunity, and it starts to bring into question whether this champion of feminism is actually a feminist at all.

And while it's not OK at all to shame anybody for their choices — especially the ones involving who they sleep with and date and where they choose to work — now that Fey has admitted she's got a mean girl past, it's all starting to make sense. If she's still plagued by her insecurities and wants to level the playing field, maybe that's what she's doing by cutting down other women, especially Swift, who's clearly at the top of her game. This is definitely something I can understand, because chances are we've all made fun of somebody out of jealousy or insecurity at some point in our lives. But doing so publicly and repeatedly isn't something we should ignore.

And really, Fey said it herself:

At its core, feminism is about supporting women — all women. Even the ones who work at Hooters. Even the ones who write breakup songs about the guys they've dated. And if Fey could just ban the "W" word from her vocabulary, she'd be the feminist girl boss role model we all need. And can you imagine what would happen if she combined her powers with women like Taylor Swift? The possibilities would be endless.

More like this
Twitter Is Identifying With Sally Field & Jane Fonda’s Friendship In New Viral Video
By Jake Viswanath
Pamela Anderson's Sons Brandon & Dylan Have Their Own Hollywood Careers
By Arya Roshanian
RHOP’s Robyn Dixon Explained Why Juan Paid For Another Woman's Hotel Room
By Brad Witter
How Andrea Riseborough Got Nominated — & Almost Disqualified For An Oscar
By Jake Viswanath
Get Even More From Bustle — Sign Up For The Newsletter
From hair trends to relationship advice, our daily newsletter has everything you need to sound like a person who’s on TikTok, even if you aren’t.