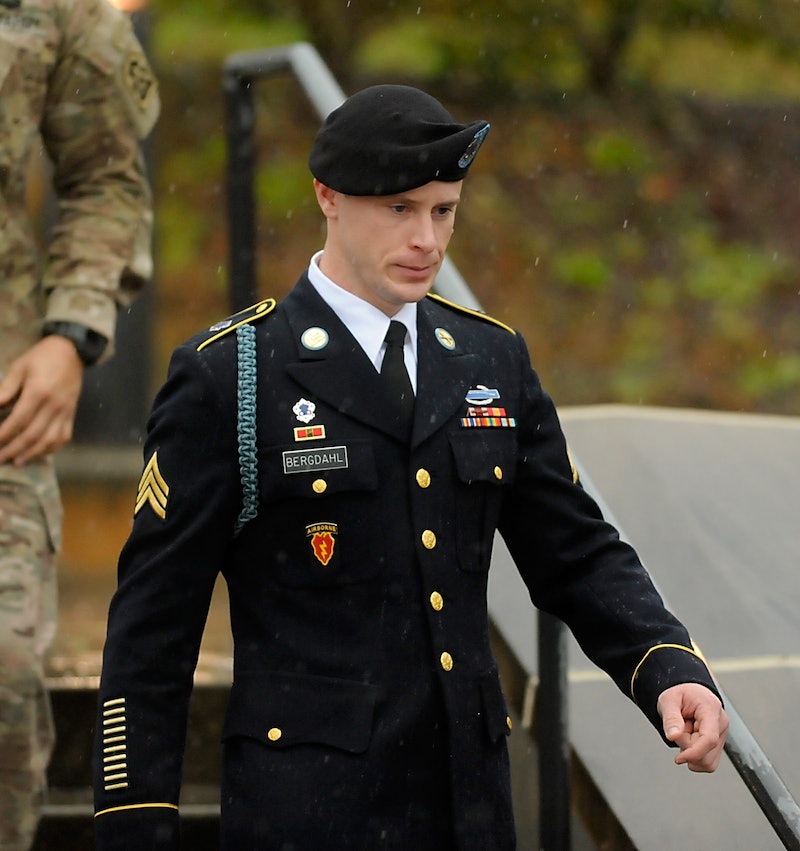 After more than five years being held hostage by Taliban fighters in Afghanistan and just one and a half back on U.S. soil, an Army sergeant once again faces being locked up — this time by his own government. Sgt. Bowe Bergdahl was arraigned Tuesday in a military court and charged with desertion and endangering troops in relation to his decision to leave his outpost in eastern Afghanistan back in 2009, which set off a huge manhunt in the rural area. If found guilty, he faces lifetime in prison. Bergdahl entered no plea, opting instead to defer entering a plea. His next hearing is Jan. 12.

The charges are much more serious than what was recommended by the Army's investigating officer and a preliminary hearing officer who heard the witnesses involved. The investigating officer said at a September hearing that prison would be "inappropriate." The New York Times reported early this month that Bergdahl's defense lawyers said that the preliminary hearing officer also ruled out a punitive discharge and had recommended Bergdahl go before a less severe, intermediate tribunal called a "special court-martial." Ultimately the decision by Gen. Robert B. Abrams, the head of Army Forces Command at Fort Bragg, North Carolina, was to go the harsher route.

The arraignment Tuesday was the beginning of a trial by general court-martial, the most serious of the Army's disciplinary proceedings. Back on Dec. 14, Bergdahl's defense lawyers released a statement explaining their disappointment in the general's decision. They also called on Donald Trump to end his public defamation of Bergdahl.

Between the Republican presidential candidate's statements (among them that Bergdahl should be executed) and the public radio podcast Serial's coverage of the case, Bergdahl's fate has drawn a large amount of media scrutiny. Through interviews Bergdahl gave to filmmaker Mark Boal and additional reporting, Sarah Koenig has told Bergdahl's side of the story for the first time. He maintains that he left his base to raise concerns with superiors about problems in his unit — not to desert.

According to Bergdahl — both in his Serial interviews and court hearings — the dramatic move (hiking 18 miles to the next military base) was to ensure he would get to talk to high level commanders about the problems he saw. He feared dangerous leadership problems were endangering his fellow troops.

President Obama has come under fire for his decision to swap Taliban prisoners that were being held at Guantánamo Bay, Cuba, for Bergdahl. House Republicans issued a report in December claiming that the Obama Administration misled them about the prisoner swap and potentially broke the law. Lawmakers were not given 30 days of notice before the prisoners were transferred.