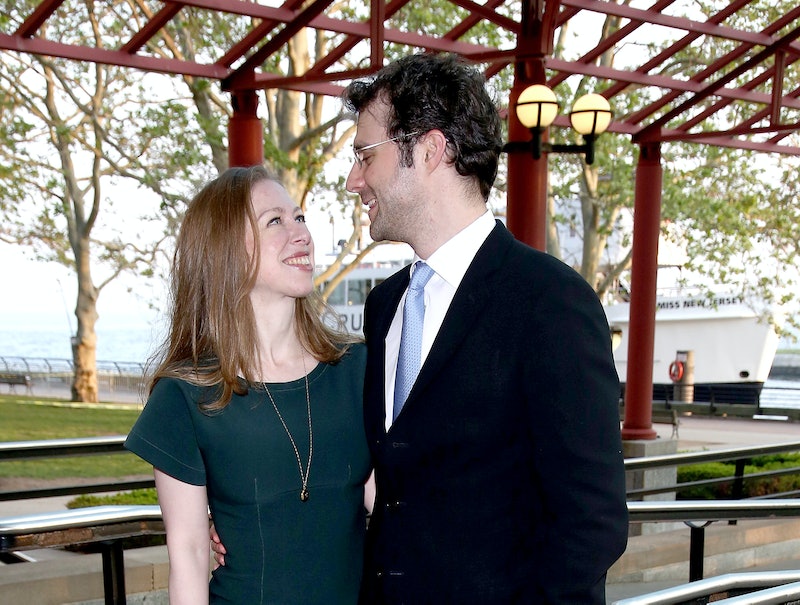 Exciting news for the Clintons! In a pre-holiday Twitter surprise, Chelsea Clinton announced that she is pregnant with her second child with her husband, Marc Mezvinsky. The statement posted to her Facebook page reads, "Next summer, Charlotte is going to be a big sister! We are feeling particularly blessed and grateful this holiday season. Being Charlotte's parents has been the most joyous, meaningful and loving experience of our lives and we are very excited about growing our family in the new year." A more pivotal-than-ever year awaits the Clinton family, who merged with the Mezvinskys when Chelsea Clinton and Marc Mezvinsky met, eventually marrying in 2010.

Understandably, not many outside of the political sphere know exactly how Clinton and Mezvinsky had the good fortune of encountering one another. Like others in political families before them, they made each other's acquaintance in political circumstances through their parents' friendships. In the case of these two lovebirds, they were introduced in 1993 at a Democratic political retreat in Hilton Head, South Carolina. Mezvinsky is son of former Iowa congressman of two terms, Ed Mezvinsky, and former Pennsylvania congresswoman and NBC correspondent, Marjorie Margolies, both of whom raised him in Philadelphia. Of course, we know Clinton's parents, who — when Clinton went to Stanford University, where Mezvinsky also went, in 1997 — repeatedly cast aside rumors of a budding relationship.

Some time passed — and a publicized long-term relationship on Clinton's part — before the two were reunited in New York City in 2005. At this point, they made public their own relationship, acting the part at events and parties. Their engagement was announced over Thanksgiving weekend in 2009, although there was false rumor of an earlier, unannounced wedding that summer. The actual wedding in 2010 was an interfaith ceremony in Rhinebeck, New York, since Clinton is a member of the United Methodist Church, and Mezvinsky was raised in the Conservative Jewish faith. Their first child, Charlotte, was born in September 2014.

Mezvinsky currently serves as a hedge-fund founder for his fund, Eaglevale Partners LP, which suffered in a poorly-timed gamble on Greece's economy. He formerly worked as an investment banker for Goldman Sachs, and for hedge-fund, G3 Capital. Clinton works for her family organization, the Clinton Foundation, delivering speeches to raise money for global health, opportunities for women, and the promotion of economic growth. One-hundred percent of the fees from her speeches go directly back to the foundation. The two keep quite busy, not to mention a familial presidential run, but that won't stop the family from growing. The couple's new baby is due in the summer of 2016.