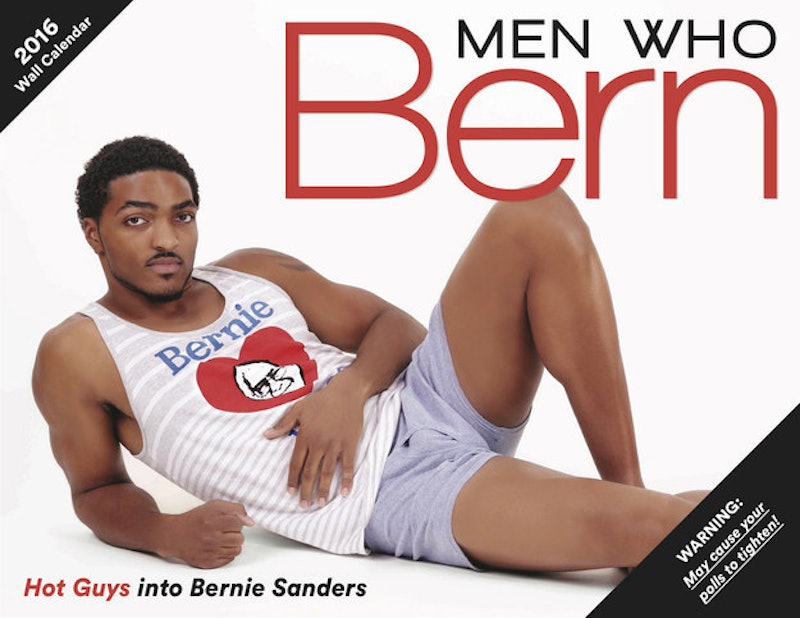 Presidential campaign merchandise is hardly ever deemed sexy, but in the case of this 2016 wall calendar, you might just be feeling the "bern." As part of a new grassroots fundraising effort, actor Joe Beuerlein wants you to get excited about Democratic candidate Bernie Sanders — so much so, that he's asked Sanders' sexiest supporters to strip down and pose for each really, really, ridiculously good-looking month of the year. So, ditch the Ready for Hillary T-shirts and Make America Great Again mugs, and give the gift of the Men Who Bern.

The guys who made it onto the calendar are either friends of Beuerlein's, or submitted photos of themselves during a nationwide search for Sanders' best looking supporters. Due to legal reasons, the calendar itself is not affiliated with the official Sanders' campaign, and its proceeds will therefore go to New York's grassroots efforts to help the Democratic candidate secure his home state in the election.

After a short five weeks, Sanders' supporters delivered, the calendar was compiled, and the Men Who Bern calendar came to be.

So how do the Men Who Bern stack up against rival candidates' campaign merchandise? Take a look at some of the other Democratic and Republican candidates' merch — there's a clear victor each time as to which one is sexier.

As useful as a Grillary Clinton spatula sounds, our vote goes to Mr. December. Do you think he could come over to help decorate our tree?

Though the pooch is awfully cute (even if he's unwittingly stuck in a Trump outfit), but we've got to hand it to "our boo," Mr. October.

We'll only be maniacs for Mr. February — he can rebuild the crumbling infrastructure of our hearts anytime.

Though the Jeb! product is enticing (who doesn't love a good guac?), the Man Who Berns is definitely sexier. Besides, Jeb's site say that his "secret guacamole recipe not included... yet," so we'll stick with Mr. January.

Marco Rubio's Mug Versus Mr. May

Though Rubio's use of the political mantra on his mug is admittedly clever, our vote goes to the sexy guy holding the Bernie cup, Mr. May.

In the world of presidential candidates' merch, Bernie Sanders' campaign — and his unofficial, but officially hot men — are the clear winners. Now, how many copies can we get?