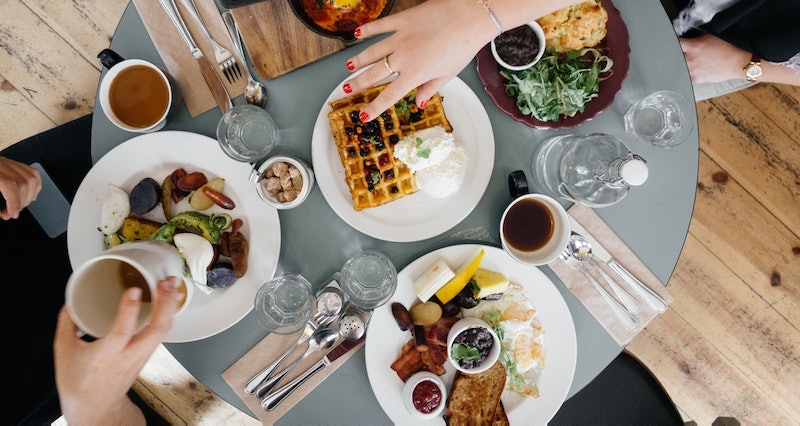 Eating is amazing. I am possibly its most devoted fan. I once came out of a general anaesthetic to remove all four wisdom teeth raving about how much I wanted a hamburger. But this means I am also intimately aware of the inherent discomfort of overeating, or, as my grandmother put it, "eating with your eyes instead of your stomach". Ignore all the signals that your brain and stomach are sending that say NO MORE PLEASE in favor of just another potato or serving of Christmas pudding, and you cause a chain reaction in your body as your system starts to react and cope.

A little overeating isn't all bad. It's uncomfortable and will lead to some socially awkward burping and farting as you get rid of gasses, but it's likely not going to kill you. The danger is actually repeated overeating, because eaters systemically change the way their bodies interact with the concept of "fullness". Everybody has a complex system in their brain and digestive system that communicates about how much food they're taking in and how much more they should have, and it takes quite a lot of overeating to shift that. Most of us will just get sleepy, gassy and get stomach aches. Not charming, but also not deadly.

So here's what happens in your body after a particularly awesome but possibly slightly over-the-top meal, and what doesn't happen. No, your stomach doesn't expand into a permanently bigger receptacle, and no, it probably isn't going to explode.

1. Your Intestines Signal Fullness To Your Brain

Your body's "oh god I'm so full" feeling is partially mental. The stomach and intestines have their own "brain," a system of hormones and nerve cells that they use to signal various other parts of the body. When you overeat, the two hormones that kick in (and that you've possibly ignored a bit) are oxyntomodulin and peptide tyrosine-tyrosine, which sound like a catchy buddy crime duo.

They're the things secreted by the intestines to say "full, no more, do not pass go, put down the fork please," otherwise known as satiety hormones. They travel to your brain and interact with receptors there that take on the fullness message, reducing your appetite. It's not just those two, though: another hormone, leptin, also communicates with the brain about how much energy you have stored and your current food needs. It does take time for them to register, which is why eating too fast might mean you overeat by accident. Linger over your dinner and give them a chance, if you can.

2. You Get Tired And Want A Nap

This is one of the most unsurprising things I think I've ever written. It's up there with "water is wet". But there are specific bodily reasons for your brain to signal that it wants to go curl up and have a nap after a particularly indulgent meal. The small intestine sends out signals to the brain that the body needs to rest and digest, triggering a drop in our wakefulness. The alternative, going out and looking for more food, is determined to be a waste of energy and not in our best interests. Napping it is.

The insulin levels in the body go up after overeating so that they can get rid of all the sugar in your bloodstream, and high insulin levels are associated with higher levels of drowsiness. Plus, your body's sugar-clearing response may actually be too efficient, leaving you with low blood sugar and a feeling of exhaustion.

3. Your Body Works To Get Rid Of Excess Gasses

The American Chemical Society released a special video for Thanksgiving 2014 specifically on the reactions of the stomach after a heavy meal, and one of the biggest culprits for your discomfort? Gas. Particularly if you've been drinking fizzy drinks, the amount of gas in the stomach and intestines after a meal can be truly phenomenal, hence your perpetual need to burp to get rid of it.

There are ways to neutralize this gas-heavy experience, including chewing on charcoal tablets or nabbing a peppermint, both of which have gas-relieving properties. Charcoal tablets do have interactions with heart medications and peppermint can exacerbate heartburn, though, so you've got to make sure your remedy is right for your body. Or, you know, just burp your way through.

4. Digestive Acid May Leak Into Your Oesophagus

This is the condition known colloquially as "heartburn," even though it's got nothing to do with the heart at all. It's been experienced by 42 percent of the U.S. population at some point in their lives, and one particular culprit is an excessively full stomach. Heartburn, despite sounding cardiac, is actually a digestive problem: it happens when digestive acid from the stomach travels upwards into the oesophagus, causing it to feel "burned". It's not fun.

Overeating is a particular trigger because it means the acid in your stomach, which is particularly corrosive, may be pushed upwards. Heartburn also particularly associated with high-fat meals, which need to stay in your stomach for a long period to digest. If it does happen, pop an antacid, which will neutralize the acidic feeling but likely won't reduce your feeling of bloating.

Heartburn is actually part of the spectrum of general indigestion symptoms: indigestion itself refers to stomach acid coming into contact with any of the sensitive mucosa, or lining, of the digestive system, causing significant discomfort. Most people will get splashes of stomach acid on some part of their system after a big meal as the stomach struggles to cope with its workload. So don't worry, you're not dying.

This is a common misconception. People believe that stuffing themselves repeatedly with too much tasty food can change the shape of their stomach, making it expand to take on more food. This is actually inaccurate; the stomach remains the same size, with a capacity of around one liter, but it can hold up to three at a push. The feeling of expansion comes when more and more food gets packed into it and it begins to press onto the surrounding organs, cramming your abdomen. You haven't permanently expanded your stomach, you've just made it crowded in your belly.

And it's also extremely rare that overeating ruptures anybody's stomach, so don't believe your cousin when he tells you his mate's brother's girlfriend's doctor knew a dude whose stomach burst after a particularly vigorous eating session. It can happen, but the body has to bypass a lot of mental warning signals and significant physical discomfort for it to get to that point, and the situation is seriously uncommon. One Christmas dinner ain't gonna cut it.