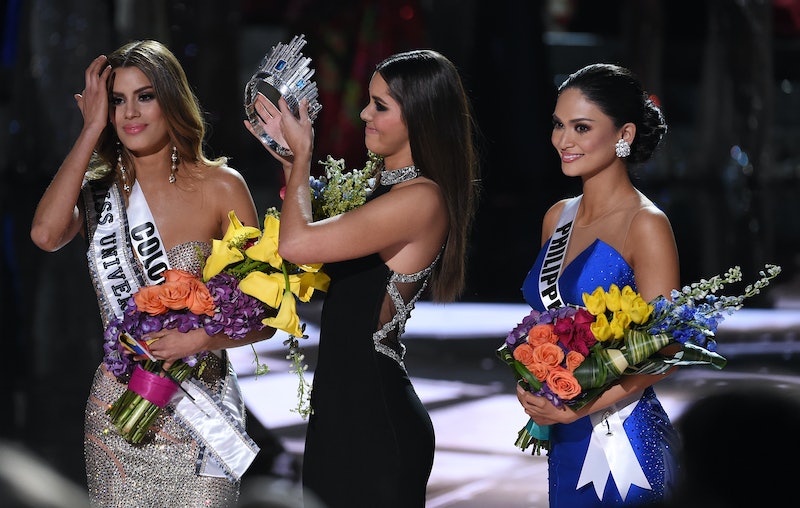 As if it's not awkward enough that both Miss Colombia (Ariadna Gutiérrez) and Miss Philippines (Pia Alonzo Wurtzbach) were unknowingly the center of a media firestorm after host Steve Harvey flubbed announcing the proper winner, now the media is doing what the media does best by pitting the two contestants against each other. Both contestants handled a very uncomfortable situation with the utmost grace and class. With winner Wurtzbach telling Entertainment Tonight simply, "it's very 2015," and first runner up Gutiérrez saying, "everything happens for a reason, so I'm very happy" and thanking her fans for their support, it would seem that the drama ended right there on the stage, the moment the audience left and the lights dimmed.

So naturally, in the immediate aftermath of the widely-broadcast flub, media reports are insinuating that the two are more than just competitors on the pageant stage. Us Weekly reports that "there might have been a teeny bit of tension" between them, putting an emphasis on the fact that they didn't speak to each other immediately following the snafu. Wurtzbach did tell Entertainment Tonight that she plans on apologizing to Gutiérrez "in the future," saying that it was "bad timing" right after the pageant ended.

But here's the thing, Wurtzbach has no reason to apologize; she didn't do anything wrong. It's not her fault that Harvey read the wrong name. Nor is it Gutiérrez's fault. And, if it truly was an honest mistake as Harvey claimed, then I would say it's not even his fault. People make mistakes all the time — he just happened to make one on live TV with millions of people watching.

People is adding to the dreamed-up drama by saying that Gutiérrez flew to Miami to "spend the holidays with her family after being humiliated on the world stage when she was stripped of her Miss Universe crown because of a mistake." She wasn't "stripped of her crown" — sensational headlines like this are likely exactly what the two women are trying to avoid.

Additionally, Miss Germany, Sarah-Lorraine Reik, claimed that she was "so upset" at what happened. In a video for Missosology, she said, "I’m really not happy with the result, and so are the other girls, I’m sorry to say it. Because [none] of us voted for Philippines. I’m so sorry to say it." She believed the true winner was Miss France, Flora Coquerel. Though she did backtrack on her words by later apologizing for her comments, it still seems like she's trying to drum up controversy out of nothing.

Despite what's being reporting, both Wurtzbach and Gutiérrez handled the situation in the best way that they could in the heat of a very confusing and bizarre moment, and no one should force them to hate each other over something that neither had control over. It's silly and petty, like most alleged cat fights between public figures tend to be, especially when there's clearly no bad blood here.