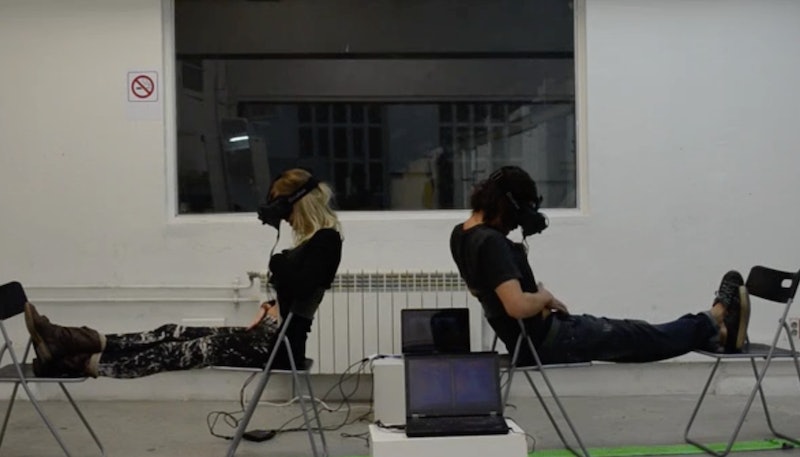 In a recent experiment conducted by BeAnotherLab in partnership with MIT, people had the chance to “switch” genders using virtual reality technology. The experiment, since documented in a video, raises significant questions about the nature of embodiment, gender, and point of view. It asks, Is it possible to change our perspectives? And if we could — even momentarily — inhabit the body of another, how would that affect how we see ourselves and others?

The “Gender Swap” experiment uses a system called “The Machine To Be Another” to virtually place subjects in other people’s bodies. It works by having users wear both a first-person camera and an Oculus Rift virtual reality headset. The camera records what the user is doing, and feeds that imagery into a partner subject’s Oculus Rift; in turn, the partner’s video feed streams into the first subject’s headset. Thus, each subject sees their partner’s body as if it were their own.

In its introduction to the video, BeAnotherLab explains that the purpose of the experiment is to create an “embodiment experience,” defined as “a neuroscience technique in which users can feel themselves like if they were in a different body.” In order for the virtual reality system to work,

The video shows two people, one man and one woman, facing away from each other and wearing The Machine To Be Another system. They have to move slowly in order to coordinate their movements and thus create the illusion of swapping bodies.

Here, we can see how one user sees his female partner’s perspective:

The experiment begins with its subjects dressed; eventually they remove their clothes in order to explore their temporary, virtual bodies.

Obviously, there are limits to this experiment, and it seems like a stretch to suggest that it would allow men and women to fully understand what it means to be of the opposite gender — after all, a virtual reality system, no matter how realistic, can’t replicate what a lifetime of social conditioning feels like. However, The Machine To Be Another does allow glimpses into other people’s points of view, into their experiences and perceptions, which could be a very powerful thing in its own right. According to BeAnotherLab’s video intro, the aim of the “Gender Swap” experiment is “to investigate issues like Gender Identity, Queer Theory, feminist technoscience, Intimacy and Mutual Respect.”

The Machine To Be Another system as a whole is also concerned with how these virtual body-swaps might be used for the social good; the project researchers explain, “Our main interest through this approach is to use the ‘Machine’ as a tool to help promote empathy among individuals of different social, cultural and ideological contexts.”