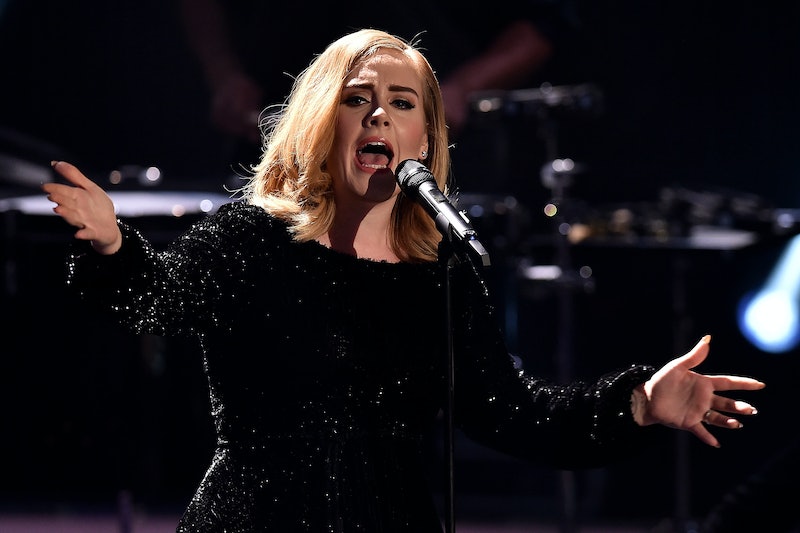 2015 has been an amazing year for Adele. Even though single "Hello" and album 25 came out relatively late in the year, they've both broken so many kinds of records that it's hard to keep up. One of the many reasons that 25 likely sold as many copies as it did in its first week of release is the fact that it's not available on streaming services such as Spotify and Apple Music. This was a conscious decision on the part of Adele and her record company, and, to start with, it looked as though Adele was following in Taylor Swift's footsteps (Swift also kept 1989 off of Spotify). But, in an interview with TIME, Adele reveals the real reason she Adele kept 25 off of streaming services.

Earlier: The singer says, “I know that streaming music is the future, but it’s not the only way to consume music. I can’t pledge allegiance to something that I don’t know how I feel about yet.” While it's nice to hear Adele confirm that streaming is the future, it's slightly strange that she refuses to embrace it. Speaking to TIME, Adele's insistence doesn't stop there, and she says, “I believe music should be an event. I don’t use streaming. I buy my music. I download it, and I buy a physical [copy]. It’s a bit disposable, streaming.” I can't deny that there is a truth in Adele's words, and holding a hard copy of a book, a CD, or DVD, can have a certain kind of magic to it. But it's archaic to not move on when the world around you already has. Still, each to their own, and Adele's ethos is clearly working for her. But here are some very important reasons Adele should move into the future, like right now.

1. We'd Be Able To Stream Her Album On Spotify

While I realize there is more to life than being able to listen to the songs you like on your chosen streaming service, it'd be nice to have access to 25 wherever I went, and I'm sure you agree.

2. She Could Ditch The Flip Phone

I love nostalgia as much as the next person, but everyone know that flip phones are done.

3. Adele Could Start A Squad, Because Everyone Has Famous BFFs Here

Adele could use her superstar status to develop a crazy BFF squad to compete with Taylor Swift's. And you know how everyone is meeting these squads? By throwing each other love online, with Twitter and Instagram. Hell, Swift could even be a member of Adele's squad! Talk about #SquadGoals.

Adele's tour may have sold out incredibly quickly, but there's an easy way to remedy that — make all of her concerts available to watch on Apple. All of them. Every single city. It'd be like a new episode every day, but instead it's a new city. Then, she could add a million extra dates akin to Taylor Swift's 1989 tour or Katy Perry's Prismatic tour, and continue to tour the world for all eternity!

5. Adele Could Create An Exclusive App

Apps are next to streaming as important items of the future, so, if Adele's truly going to enter 2016 in style, she needs her own app. You know it makes sense.

6. Adele Could Design A Fashion Line

For starters, I want the tartan coat she wears in the "Hello" video. Her unique style would be an instant sell-out. If she combines this with the app, a lá Kim Kardashian Hollywood, she'd make even more money.

Adele is old school, and I can respect that. The most important thing is that she appears to be an artist who stays true to herself, and that's obviously something that appeals to her fans. After all, physical copies of her album have been selling like hot cakes, so Adele's business acumen is obviously on fleek. Maybe the future will have to wait a little longer for Adele.