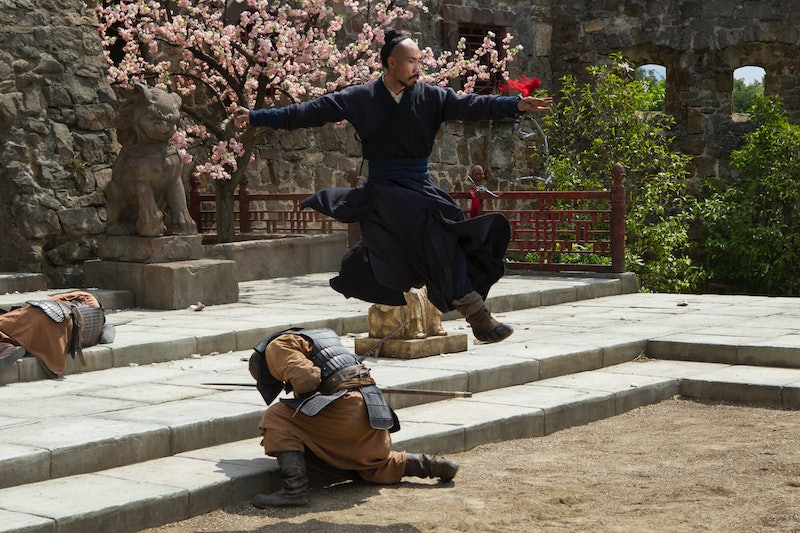 Even though Season 2 of Netflix's Marco Polo still won't be out for a while, in the meantime, the same cast and crew have produced a short special, M arco Polo: One Hundred Eyes , that will premiere on Dec. 26, that goes into the origin story of the monk "Hundred Eyes," played by Tom Wu, who provided sage advice for Marco Polo throughout the first season. And, since the show's titular character is based on the real Marco Polo, is his mentor "One Hundred Eyes" a real person? Yes, the name "Hundred Eyes" is a historical reference, but the character only slightly resembles the real figure on which he was based.

Diving into Hundred Eyes' backstory will provide an opportunity for the creators to show off their knowledge of Bayan of the Baarin, the real military leader who was nicknamed "Hundred Eyes," according to the book A Brief History of Khubilai Khan. But it will be a little bit of a challenge for the writers to sneak in similarities between the character and the real person, since they've already established so many differences between the two. However, the real Bayan of the Baarin was also a fascinating man — here are some key ways Marco Polo chose to divert from history in favor of their new "Hundred Eyes" character.

Their Names Are Similar For Different Reasons

In Marco Polo, Hundred Eyes' name refers to his lack of physical sight but ability to sense what is around him and still be an amazing fighter based on his martial arts skills. The real life reason behind the moniker was attributed to a translation error, according to The Biography of Bayan of the Bārin in The Yüan Shih. According to A Brief History, "a hundred eyes" in Chinese is bai-yan.

The real Hundred Eyes was, as I said above, a military leader according to A Brief History. But the onscreen Hundred Eyes is a Taoist monk who hardly spends most of his time ordering around armies on the battlefield, probably the biggest change from the inspiration for the role. He will fight, but not the same way Bayan did.

Their Opinions On The Khan Family

In real life, Bayan worked as a part of the Mongol army, working his way into the fold as a valued general. But in the trailer for the One Hundred Eyes special, it says that the younger Hundred Eyes will stand up to Khan, and will wind up having his eyes taken out as punishment for killing some of Khan's men (at least, that's what Marco Polo Season 1 implied).

Of course, by the time of Marco Polo, the two have gone from rivals to having mutual respect for one another... but it will be interesting to see how that relationship began when both were younger men.

Only One Was Once Played By Orson Wells

Wells died before Marco Polo came out, so it's not much of a fair comparison, but in the shockingly politically incorrect days of 1950, he played the Mongolian Bayan in The Black Rose, a historical epic. It was likely Bayan's heavy responsibility as a general that drew Wells into the part.

Like playing any Shakespearean or Greek hero, his struggles are palpable onscreen. However, no matter how well Wells performed, it's nice to see that Tom Wu is paying a more respectful tribute to Chinese performers from kung fu movies — even if his version of the character can occasionally be a little cliche too.

So there you have it: Basically, aside from a few key points like the name, fighting skill, and ultimate loyalty to Kublai Khan, there's almost nothing about Hundred Eyes on Marco Polo that perfectly matches up with his real life counterpart. But the One Hundred Eyes Netflix special will be an entertaining ride anyway, even for history buffs, since there's sure to be some references to the real Bayan hidden in the new story.