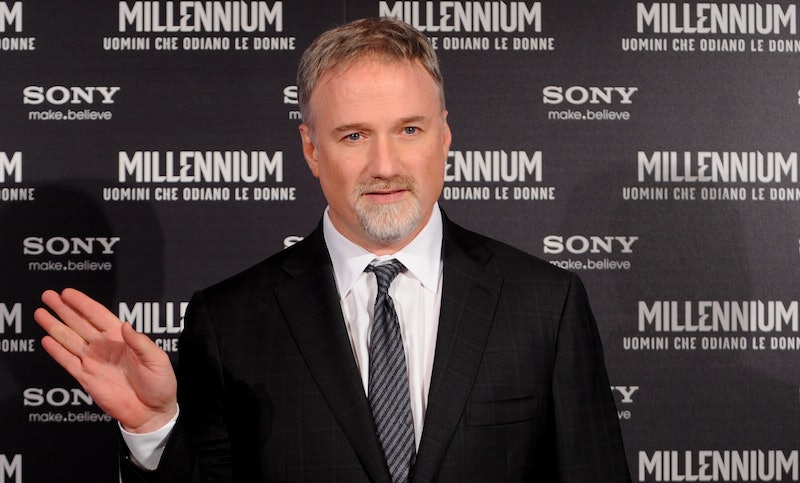 In an era where TV has become a serious art form, it's not unusually surprising to see award-winning directors inking deals with television shows . After all, television is in a new golden age — there are so many great series airing that it's nearly impossible to keep up. Even things like the Emmy Awards or the Golden Globes that used to be fairly easy to predict are now continually surprising and filled with snubs, simply because there is so much TV. Even David Fincher, the Academy Award nominated director of The Social Network and Gone Girl, directed the first two episodes of the acclaimed series House of Cards. Now, it's been announced that Fincher will be teaming up with Netflix again to launch a show called Mindhunter , which will reportedly star Charlize Theron. According to Deadline, the show will be about FBI agents who track serial killers, and I'm already looking forward to marathoning it.

Fincher is far from being the only highbrow film director to dabble in television over the past few years. TV, which used to be a place for directors to get there start and then leave immediately after they got film work, has become a credible art form — a place where directors can stretch their legs and try their hand at long-form story telling.

Let's take a look at other big time movie directors who've taken to the small screen.

Even if you don't know exactly who Soderbergh is, you've probably seen at least a handful of his movies. He's responsible for all three of the Ocean's Eleven movies, The Informant!, Erin Brockovich, Magic Mike, Haywire, Contagion... and the list just keeps going. Soderbergh has also directed a bunch of episodes of the Cinemax drama The Knick, in addition to serving as an executive producer. He also made the HBO movie Behind The Candelabra.

Perhaps the most famous director of the last 50 years, even Scorsese has turned his considerable talents to television recently. In between directing films like The Wolf of Wall Street and Hugo, he directed two episodes for HBO — one for Boardwalk Empire and another for the upcoming series Vinyl (which he's producing with Mick Jagger. NBD).

Reitman's first real claim to fame was the sleeper hit Juno back in 2007. He's also directed Thank You For Smoking, Up In The Air and Young Adult. On the small screen, the four-time Oscar nominee has directed two episodes of The Office and Casual, which was just nominated for Best Comedy Series by the Golden Globes.

Van Sant has directed cult classic indies like Milk, Good Will Hunting, Drugstore Cowboy and My Own Private Idaho. After getting nominated for an Oscar for his work on Milk, he decided to try directing for TV in the form of Boss. Boss was a short-lived show on Starz, that focused on a Chicago mayor played by Kelsey Grammer.

Haynes has directed beautiful, artistic films like Oscar-contender Carol, I'm Not There, and Far From Heaven. In between making those, Haynes dipped a toe into television-directing with the fantastic miniseries Mildred Pierce (if you haven't seen it, please go fix that right now) and an episode of Enlightened (again, watch it now. Laura Dern is a treasure).

Daniels has directed triumphant, award-nominated films like The Butler and Precious, but you can also thank him for your obsession with Cookie Lyon. This year, Daniels co-created Empire with Danny Strong (aka, Jonathan from Buffy the Vampire Slayer). In addition to creating, producing and writing for the show, he even directed three episodes of the hit Fox drama.

Campion is responsible for the riveting dramas The Piano and Bright Star. In 2013 she created and began directing the show Top of the Lake for the Sundance Channel. The crime drama follows a detective, played by the reliably wonderful Elisabeth Moss, who's investigating the suicide of a 12-year-old. Sounds like SVU meets Twin Peaks, and I am so down.

So, there you have it. TV is not just a launching pad for the careers of brilliant directors — it's also become a platform that they can return to whenever they want to explore more ideas.

More like this
'Doctor Who’s New Star Is Already Huge On TikTok
By Maxine Harrison
What’s New On Netflix: A Victoria Justice Rom-Com & The Return Of David Letterman
By Arya Roshanian
How Ncuti Gatwa's 'Doctor Who' Casting Impacts His 'Sex Education' Future
By Nola Ojomu
What’s New On Netflix: The Return Of 'Bling Empire' & A Rebel Wilson Comedy
By Arya Roshanian
Get Even More From Bustle — Sign Up For The Newsletter