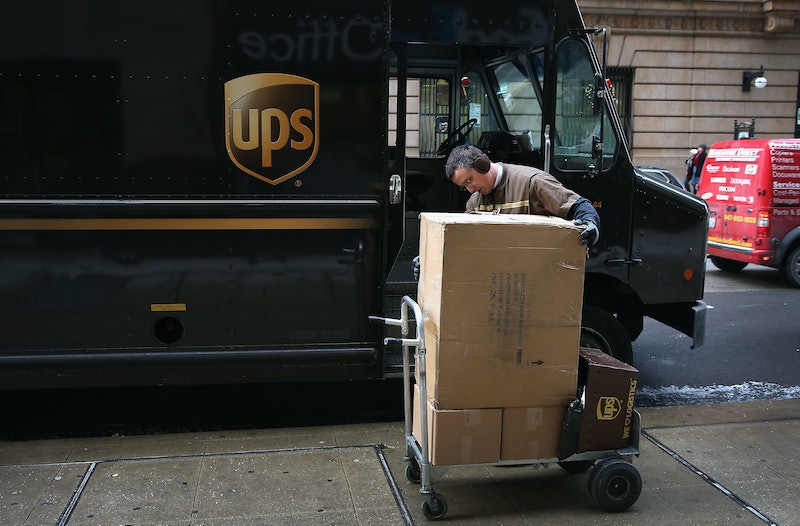 Santa Claus may be famous for magically delivering packages all over the world in a single night, but UPS may just give the old man a run for his money. This time lapse video showing how UPS ships millions of packages overnight reveals that the delivery service relies more on planes and trucks than flying reindeer, but it’s a feat that's still pretty darn mind-boggling in scope. The Associated Press reports that today, December 22, is the busiest day of the year for UPS; the company is set to deliver about 36 million packages — a step up from last year’s meager 35 million. To put that number in perspective: The number of packages that UPS will deliver today alone is larger than the total population of Canada.

Central to getting all 36 million parcels to their destinations on time is Worldport, an automated sorting facility in Louisville Kentucky. At 5.2 million square feet — the size of 90 football fields — Worldport is truly massive, containing 155 miles of conveyer belts. According to UPS, Worldport can sort up to 416 thousand packages every hour.

Worldport is open 24 hours a day, but it’s peak hours are at night. The Associated Press explains that, from midnight onward, a plane lands at Worldport every 60 seconds; the air hub receives 130 planes every day.

Once on the ground, packages make their way onto a complex web of automated conveyer belts.

When a package reaches its destination, an employee loads it onto one of UPS’s 38 thousand shipping containers. This may be the only time in the entire process that a person handles the package.

The shipping containers go onto a plane, and the package jets off to its ultimate destination.

The whole thing is mostly over by 4 AM. Whew!