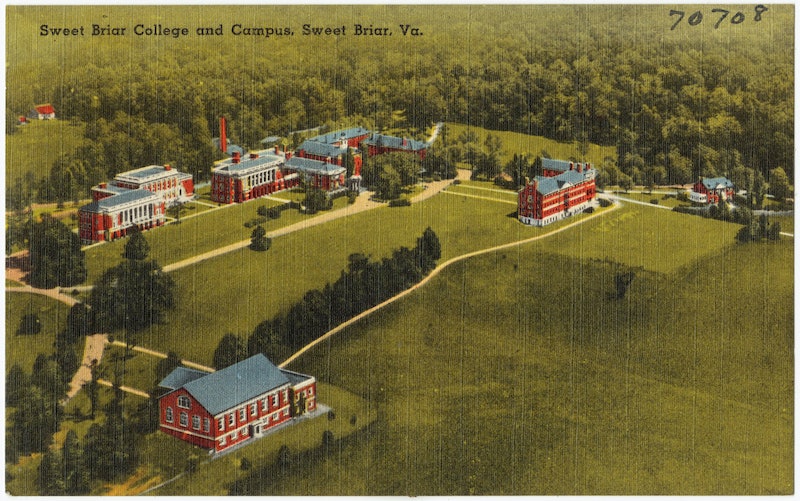 That mentality seemed to be the consensus among commentators and journalists, from Newsweek to NPR, when the school's closure was announced in March. That is, until Sweet Briar alumnae rallied together in protest.

Alum Tracy Stuart moved quickly to establish the nonprofit Saving Sweet Briar Inc, and quickly brought other alumnae on board. They launched an impressive social media campaign, and ultimately fundraised more than $12 million to keep Sweet Briar open — which also raised a lot of hope for the future of women's colleges across the country. In a matter of six months, the valiant Vixens, along with state legislators, had changed the fate of their bucolic Blue Ridge school, at least for the short-term. This week, Sweet Briar announced that it's seeing the highest number of new applicants in half a century.

The long-term fix for the struggles women's colleges face lies in the same people who came to Sweet Briar's rescue: the alumnae. Many small, private, tuition-dependent women's colleges depend not just on alumnae donations but their enthusiasm and commitment in reaching out to prospective students. Now, more than ever, prospective college students and their parents want college degrees to be worth the investment and lead to high-paying jobs. Hence, increased interest in large research universities with strong internship programs and vocational training.

If given respect and proper instruction, passionate women's college alumnae, like the ones at Sweet Briar, are more likely to convince high school students of the benefits of a liberal arts education than any brochure or website.

“While I believe women's colleges have a strong future in terms of the women who want to be a part of these communities, the professors who want to be a part of something intimate and meaningful, and the businesses that want to reap the benefits of hiring the products of such an education, I also know that leadership is key,” says Maggie McNamara, a 2011 graduate of Sweet Briar who was a part of the college's revival.

As the school works toward gradually increasing its enrollment to 250 to 800, a larger applicant pool means more students from which to choose. One semester into Sweet Briar's second chapter, alumnae relations already have significantly improved, says Steven Nape, interim chief admissions officer at the college.

But before Sweet Briar found itself at the point of promise, it experienced what Nape calls "dark times." From the closing announcement in March until June when alumnae reached a deal to reopen the school, the Sweet Briar community suffered from uncertainty. On top of that, it seemed that the whole country was watching.

Michele Ozumba, president of the Women's College Coalition, an American organizations for women's schools across the country, says that Sweet Briar received a lot of media attention because it's a historic school. "The closing announcement was a wake-up call for women's colleges," she says. "If Sweet Briar failed, it's not that all women's colleges would've failed, but it would have really affected everyone in that sector."

So the pressure was on. It was not just a matter of school pride; it was a matter of pride for women's colleges across the United States.

When Nape went back to work for Sweet Briar's Office of Admissions in July, it was essentially empty. An all-new staff was hired and a slew of alumnae volunteers jumped in to woo back the previously enrolled Sweet Briar freshmen, sophomores, and juniors who had been told to make other plans for Fall 2015.

“One option was to say, let's not just worry about this year, but we couldn't do that,” Nape says. “We simply had to have students.”

Alumnae came into the office and picked up the phone, but far more made connections through Facebook and other social media channels to assess which students had a true interest in returning to Sweet Briar and which ones were sticking to their transfer plans.

“It was only people formally sitting in the office,” Nape says. “We wouldn't have made it if it was just that. The alumnae helped us tremendously.”

But not every student was beckoned back to campus. Sweet Briar opened up in 2014 with approximately 540 students on campus; this fall, the campus saw about 240 students. According to Nape, previously enrolled Sweet Briar students had a flurry of questions: Would they still receive financial aid? Would the college be open beyond one year? Would all the same majors still be available? Would the same faculty advisors be on campus?

Staff and alumnae volunteers could not linger too long on outreach for the 2015-2016 school year. After all, fall is college application season. Colleges and universities typically begin hitting high schools and college fairs in September. Sweet Briar had to begin building its freshman class for next academic year.

“After we got through the craziness of the summer, we looked closely at recruiting work done before then,” says Nape. “That usually required two years of talks to high school students during their junior and senior years.” But Sweet Briar didn't have that kind of time. “We were building the plane as it was rolling down the runway.”

Volunteer alumnae received a Vixen Kit, or box of recruiting materials, and access to online training materials that could help them answer high school students' questions. All of these materials were created over the summer in time for the first college fairs in September. This year, Office of Admissions staff will be visiting 15 states. Alumnae will cover 20 more.

“Alumnae are expanding our reach at high schools, college fairs, and events,” says Nape. “They're spreading the word and generating interest. That way the staff and alumnae are working on prospective students jointly.”

Last week, Sweet Briar also launched a new software called Admissions Advocate. The software merges two different databases: alumnae volunteers and prospective students. According to Nape, there are approximately 8,000 alumnae in the system, which gives the college unprecedented access to available alumnae and potential freshmen. Students like freshman Amelia Currin can then have the opportunity to do things like shadow alumnae Leah Busque ('01) at her successful San Francisco start-up, TaskRabbit.

It's the job of Marcia Thom, a long-time Sweet Briar music instructor who got involved in admissions over the summer, to match alumnae with high school students. She says that one of her favorite stories in her new role happened at a college fair in Northern Virginia this fall.

“One alum was so excited, so appreciative, and so thankful that I asked myself, Why is she thanking me so such?” Thom says. “So I said that we appreciated her, that we thanked her. She said said, 'I'm so appreciative because I went through all the training last year at the college, only to be told that I was too old to do this.' She's in her early 30s. It's a funny story that's indicative of a problem we've had to overcome. Our alumnae were treated badly in the past.” She added that gaining alumnae's trust was crucial this past semester.

Director of Alumnae Relations Kathy Papadimitriou agrees that Sweet Briar College's relationship with its alumae previously was more traditional: “You go to college to get your education, maybe work for the college for one or two years after graduation, and then leave.”

“We were getting the typical annual fund requests, campus invitations and magazine, but not much else,” she says. “This fall they brought back using alums for the wonderful resource that we are — people. Alums all over the US signed up to receive college fair material and put their time into local recruiting. The outreach has been 'get involved' over 'give money.'”

If Sweet Briar can continue to drum up alumnae support, it can continue drumming up high school interest and national confidence in the future of women's colleges. Ozumba believes that alumnae are an under-accessed asset as a whole, but are an asset that must be used more often and more effectively at women's colleges. “Sweet Briar alumnae really are a great example of the power of alums' passion and commitment,” she said. “And I totally give credit to their experience at a women's college for creating who they are as adults in the world.”

Ozumba believes all women's colleges are training grounds for women in leadership. “They're the only colleges that have the singular distinction of specializing in women's leadership for the past 200 years,” she says.

And she doesn't see Sweet Briar, or women's colleges as a whole, are going away any time soon.