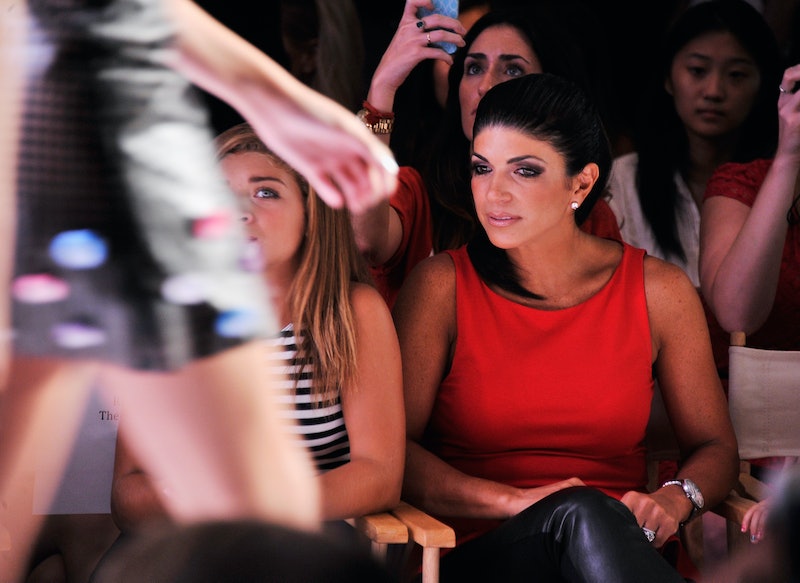 After serving 11 months of her 15 month jail sentence at Danbury Federal Correctional Institution, Teresa Giudice has been released from prison two days before the Christmas holiday. E! News confirmed that Giudice was picked up by her lawyer, James Leonard Jr., and will be serving the rest of her sentence in home confinement. Her husband, Joe Giudice, begins his prison sentence sometime around February or March, after Teresa's sentence is up on February 5, as the couple is slated to serve back to back sentences after pleading guilty to tax fraud. However, now that the reality TV star is, technically, free from prison, what will Giudice do next?

The answer is probably not very much. After all, the home confinement means that anything that Giudice chooses to do has to come to her, rather than her going out to meet it. While that doesn't restrict her too much — phone and Skype meetings are still a thing, and she doesn't necessarily seem to be confined to her home — US Weekly reports that, "nothing is official” and that “work is at the bottom of Teresa’s priority list right now.” So, don't expect to be seeing Guidice's homecoming on a Bravo special or anything of that like. Right now, it seems that the former real housewife's top priority is just coming home to her family and reuniting with her children, 14-year-old Gia, 11-year-old Gabriella, 9-year-old Milania, and 6-year-old Audriana.

US Weekly also reports that Giuidice's holiday plans are relatively simple: to spend her Christmas at "brother and sister-in-law Joe and Melissa Gorga’s home in Montville, New Jersey." And, quite honestly, this is all for the best. Throughout the trial and the jail sentence, Giudice's top priority has been her family, and making sure that her daughters are taken care of. Getting released from jail early might seem like a blessing, but the fact that she currently has no plans beyond reuniting with her family shows exactly how serious she has been taking her sentence, and how much she's been missing the people that she loves while she was away from them for most of the last 11 months.

It still remains to be seen what Giudice will do after the holidays — or, even further into the future, after her 15 month sentence is complete — but these plans are more than enough for now. She has a short window to enjoy having her entire family back together before her husband Joe leaves to begin his own 41 month sentence, and it seems as though she's making as much of that time as she can before it's over. That's nothing if not understandable, and relatable, during the holiday season, even if you can't quite relate to the unusual circumstances under which the Giudice family commitment to togetherness is taking place.