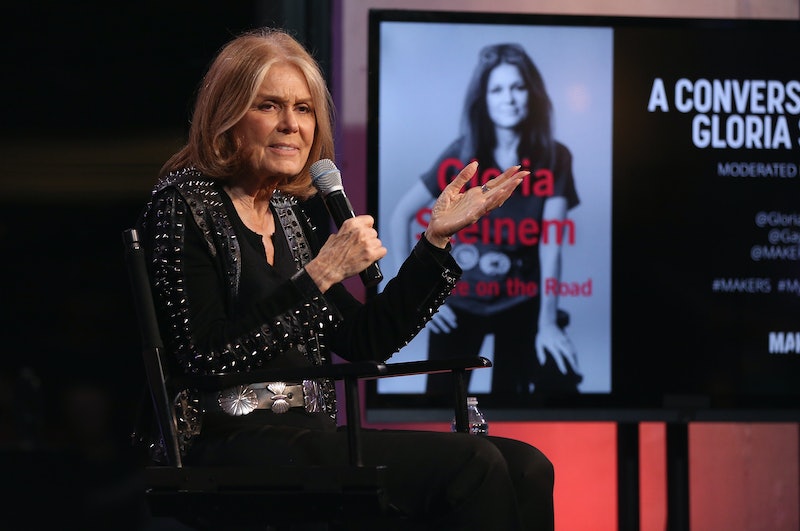 If you haven’t figured this out by now, I’m basically the resident librarian of my girl squad. If we were the Spice Girls, my name would be Bookish Spice (or, you know, something to that effect.) So it’s not easy for me to narrow down my list of you-must-reads to the ONE book I think every woman should read. But if there is, in fact, just one book every woman should add to her reading list — or at least one selected from the very long list of amazing books that were published in 2015 — it's definitely Gloria Steinem's My Life on the Road .

I don’t know about you, but I wasn’t officially introduced to Gloria Steinem until college. Growing up, if she came up at all, she was vaguely referred to as “that woman” who was causing such-and-such trouble, or as a footnote in my traditionally androcentric history textbooks. So as Steinem’s first book in over 20 years, My Life on the Road is perfectly suited to introducing a whole new generation of women to the pavement-pounding feminist, former undercover Playboy bunny, and co-founder of that magazine ( Ms. ) your parents glanced at dubiously when you brought it home for the first time — aka: the Steinem that exists beyond the controversial headlines.

Here are six reasons why Gloria Steinem’s memoir My Life on the Road is the one book every woman should add to her reading list.

If you've paid even five seconds of attention to the Barnum & Bailey-esque theatrics that comprise the majority of 2016's emerging election season, then you know that people seriously love to talk about abortion. So between the seemingly constant legislating of women's bodies, to the myriad issues facing Planned Parenthoods all over the country, the dedication of Steinem's memoir — to the British doctor who helped her obtain her own abortion after an ended engagement, while Steinem was on her way to India at 22 — couldn't be more timely or thought-provoking. "Do what you want to do with your life," the doctor had made her promise.

2. Steinem’s Journeys On The Actual Road

Steinem's memoir opens with a glimpse into the life of her father Leo — a large, gentle man with an even larger yen for road trips — who taught Steinem how to travel, and to value the road as a destination unto itself. She acknowledges that her father had opportunities for his life that were largely denied her mother at the time, and learned from observing both of them to choose differently for her own life. She also learned the importance of not driving her own car; because if you're going to be so isolated from your fellow road-travelers, than what's the point? Try out that mindset the next time you dread taking a crowded subway car.

3. Steinem’s Journeys On The Metaphorical Road (To Justice)

There's nothing like exploring where we've been in order to understand how far we've come. Steinem describes her early encounters with grassroots activism and community organizing through the 1963 March on Washington — a history-making event she almost didn't attend. She describes the informal education she received by observing Gandhian organizers throughout her first trek through India, and she details her relentless campaigning for the equal rights of girls and women — including one event, the 1977 National Women's Conference — which she described as the most important event in history that "nobody knows about."

4. Her Willingness To Acknowledge — And Learn From — Her Own Prejudices

I don't know about you, but I have a tendency to hold figures like Gloria Steinem to mythological standards of perfection — a perspective that makes their efforts and achievements seem unobtainable in my own small life. So hearing about several of her worldview-altering encounters, like the time she entered a South Dakota diner filled with bikers, and a woman whom she assumed couldn't possibly be a fellow sister-in-feminism approached Steinem and thanked her for her work at Ms. magazine. Improbably her biker husband read the girl power mag too. Not only will this anecdote give you all kinds of good we're-all-in-this-together vibes, it'll also remind you everyone has a few hangups of their own to squelch — even the most liberal of social activists.

5. She’ll Inspire You To Have More Face-To-Face Conversations

From the talking circles she witnessed among the Gandhian organizers to the similarly-styled many voiced discussions she studied in Native American culture, Steinem is an unfailing advocate for in-person, round table discussions. Whether she's headlining a women's convention, speaking at a college campus, or conversing with her taxi driver, Steinem's many tales of life-transforming conversations will inspire you to take your own conversations offline and into your own talking circle.

6. She’ll Inspire You To Be Yourself In The Face Of Criticism

Some days, at least in my life, it feels like the world is split between champions of political correctness and social media trolls — and often one camp can be just as disparaging as the other, however well-intentioned they may initially start out to be. Steinem's stories of weathering the storm of the troll-iest of trolls, even those off the web, and never flinching from the convictions she's built her life around, is major raise-your-own-voice inspiration.

More like this
50 Books To Read With Your Book Club
By K.W. Colyard
10 Must-Read New Books Out This Week
By K.W. Colyard
Josh Peck Shows Love To Jennette McCurdy After Her Shocking 'iCarly' Revelations
By Radhika Menon
We’ve All Had Bad Sex. Nona Willis Aronowitz Is Talking About It.
By Sophia Benoit
Get Even More From Bustle — Sign Up For The Newsletter