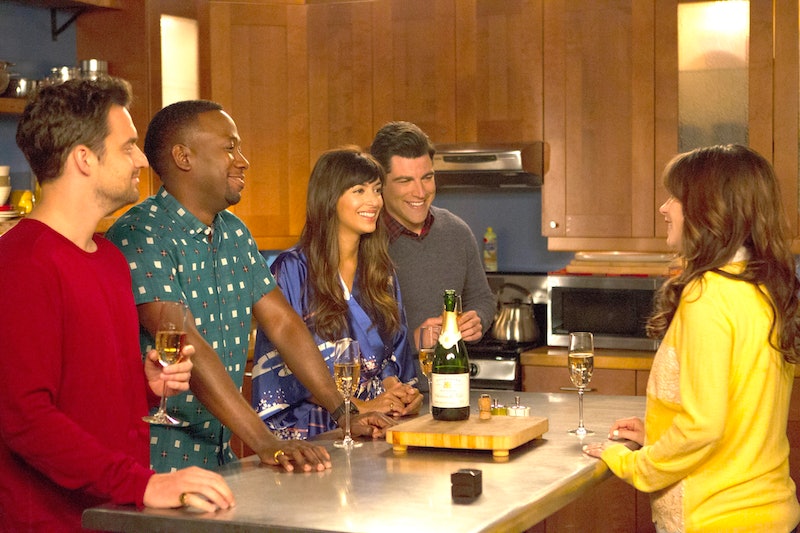 The Spice Girls knew what they were talking about. We expect our lover to be cool with the people we're closest with, and if they can't meet that basic requirement, we seriously consider moving on. But let's not forget the other side of the coin — how we're getting along with our partner's friends. After all, it's only fair we make the same effort we expect of them.

But just hanging out with the SO's friends can be a stressful endeavor, often because you're just worried the whole time whether you will be granted the Stamp Of Approval. I know that anxiety all too well. I was dangerously close to having a panic attack the first few times I hung out with my boyfriend's friends. I had just moved to Australia and was having enough trouble understanding the weird accent and the even weirder slang, so meeting everyone on top of it all was terrifying.

After a few weeks of agony, I pulled myself together. I realized that there is no chance of being on good terms with your SO's buddies if you don't put in solid effort yourself. Today, some of my favorite people in the world are my boyfriend's oldest friends. I'm here to tell you that if I can make it happen, you certainly can too. Here are nine tips for getting along better with your partner's friends. (By the way, a few beers never hurt.)

Do your very best to not be that girlfriend, the one who says no to all the parties and weekend trips. You can't expect your boo's friends to like you if you don't put in the very minimal effort of showing your face. It might be awkward the first few times you join in on the group outings, but the discomfort will go away with time.

If you're nervous about the idea of being all your SO's friends at once, plan the get-together yourself. Have them over to your place or pick a bar you're familiar with. Feeling like you're on home turf will you put you at ease and make the socializing a bit easier.

2. Accept Them The Way They Are (Within Reason)

Sure, they might do bizarre things and have a dark sense of humor that you just don't get, but instead of attaching labels to all that, take it as it comes. Social gatherings will suddenly become much more tolerable, and you might be surprised to find some characteristics in them that you enjoy.

Of course, this all goes out the window if they're being rude to you, or acting like racist or sexist assholes — then the issue is why your partner is friends with them in the first place.

3. Don't Be Afraid To Take Control Of The Conversation

My boyfriend and his buddies love to talk about surfing; they an go on for hours and hours in a language I'll never be able to fully understand. It used to make me feel super lame because I couldn't contribute to the conversation — until I finally realized that I don't have to sit through it like a mute.

If you feel my pain, and your SO's friends chat incessantly about old memories you weren't present for, take charge. Change the subject and steer the conversation so that everyone, including you, can participate.

4. Don't Worry Too Much About Making A Good Impression

It might be your first instinct to be on your best behavior when you're with them. You want to make a good impression, right? You may think that censoring yourself will do the trick, but it's not going to get you anywhere. Most of the time, when you think you're coming off as polite, you just appear inauthentic to those who don't know you all that well. Joke around with them the same way you do with your own crew. If they don't pick up on your humor right away, they'll gradually warm up to it.

Have they said that to you before to your face? Or to your SO? OK then, don't make up those stories in your head. You'll only drive yourself crazy and eventually convince yourself that everyone hates you. (They don't.) If you let that insecurity fester, you'll have this mental block that makes it impossible to have a good time together.

Be confident in your personality. Remember that there are a lot of things your partner likes about you, so it won't take long for their friends to also uncover the good stuff.

6. Bring Your Friends To Hang Out Too (Sometimes)

I find this to be the best strategy for feeling comfortable with your partner's gang. Your friends will end up being the best buffers, and they'll make you feel at ease no matter what the situation is. Having your group around will help you bring out your true self too, so the next time you're flying solo, you'll be more comfortable acting naturally around your SO's buddies.

Obviously, don't do this every time, unless they suggest it. (Hey, your friends are cute.)

7. If Your Partner Upsets You, Wait Until You Get Home To Fight About It

Bickering in front of the friends will do nothing to improve your relationship with them. It makes them feel uncomfortable and it's a bit of a buzzkill. If a little scuffle happens between you and your partner, try to keep the drama to a minimum when everyone is still out together. Settle the score when you get home and you can talk about it in a calm environment.

8. Don't Run To Them When You Have A Fight With Your SO

Save the tears and trash talk for your own friends. If you get your partner's friends involved, things could get messy. When you're in the middle of a fight, you're bound to say some things that you might regret later — and that's OK. You just don't want them to fall on the wrong ears. Because their allegiance isn't to you, you might get into a disagreement over whose fault it really is, and suddenly your SO won't be the only one you're in a fight with.

9. Don't Put Pressure On Yourself To Be Best Friends With Them

Think of it as Ben & Jerry's: just because your SO loves Cherry Garcia doesn't mean you have to as well. It's the same with their friends. Becoming besties with the people in your partner's life isn't a dealbreaker for your relationship. Sure, it would be nice if you texted each other all the time and had inside jokes, but it's not necessary. The second you let go of that image in your head, you create space for a genuine friendship to grow between you guys.

More like this
24 Years Ago, 'Friends' Dropped Its Most Underrated Ross & Rachel Episode
By Grace Wehniainen
14 Scary Campfire Stories To Tell Your Friends
By Charlotte Ahlin and Kaitlyn Wylde
10 Ways To Be More Empathetic To Your Partner
By Raven Ishak and Lexi Inks
Think Your Partner Is Cheating? These Tarot Cards May Confirm Your Suspicions
By Kristine Fellizar
Get Even More From Bustle — Sign Up For The Newsletter