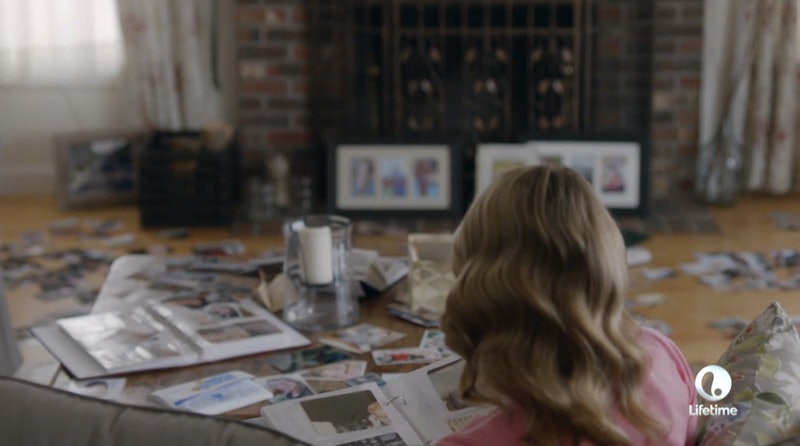 As the years go on, it seems Lifetime movies keep getting more and more intense in their plots, whether they're based on a true story or not. With titles like The Murder Pact, A Teacher's Obsession, Online Abduction, and Patient Killer, you know exactly what you're going to get when you tune in to these movies: two hours of over-the-top and thrilling guilty pleasure entertainment. By comparison, Lifetime's newest movie premiere sounds tame. So, what is this movie about and, more importantly, is The House Sitter based on a true story?

Unlike so many Lifetime movies before it (seriously, it has a whole section on its website devoted to flicks based on true stories), The House Sitter is not based on any real events. Of course, that doesn't mean the events of the film aren't frightening to think about. Here's the official synopsis of The House Sitter , as detailed by movie's production company, MarVista Entertainment:

A family still reeling after the accidental death of one of their daughters, returns home after an aborted month long getaway to Rebecca, a seemingly pleasant house sitter. Since they returned early, Rebecca has nowhere to go, so the family invite her to stay. At first, Rebecca is a godsend—she cooks, cleans, and does laundry; but the family soon discovers that the woman is not as innocent and sane as she appears. Since they have been gone, Rebecca has not only grown very attached to the house, but to its owners. Seeing their pictures, going through their things; she’s created a whole world in her head of who they are. Now that they are back, she isn’t simply satisfied being a guest … she wants to be a part of the family. And she’ll do whatever is necessary—including murder—to make her wish come true.

A grieving family, a woman using domesticity to hide her psychosis, a questionably sane houseguest — The House Sitter has all the makings of a perfectly creepy guilty pleasure watch. Not convinced? Check out the trailer:

Although there are plenty of thrillers out there about babysitters stuck in houses while being terrorized by a deranged killer, there aren't quite as many about house sitters. However, I was able to track down a couple pop culture examples of house sitters, though none quite as scary as Rebecca from The House Sitter.

This '90s rom-com starring Steve Martin and Goldie Hawn follows a compulsive liar who inserts herself into a stranger's life by moving into his house when he's not looking (no, I'm not making this up). Between all the lies and the hijinks, the two fall in love — though I doubt they could live happily ever after even with that unique meet-cute. Unsurprisingly, the rom-com wasn't a hit with critics or movie fans and holds a rotten 37 percent on Rotten Tomatoes.

Over the course of her career, Tori Spelling has starred in her fair share of made-for-TV movies with titles like Co-ed Call Girl and Death of a Cheerleader, but one flick that flopped even by TV movie standards is the 2007 thriller about a house sitter. This movie's failure makes a little more sense once you read the head-scratching synopsis: "An out-of-work artist takes a job house-sitting and gets caught in a deadly triangle between obsessed brothers." Um, what? On the bright side, this TV movie co-stars Dylan McDermott (who is of no relation to Spelling's real-life husband Dean McDermott).

So, while Lifetime's The House Sitter may not be the first time a sinister house sitter has appeared in a movie, Rebecca will definitely take the cake for the most dangerous — and may even become the reigning queen of house sitters in thrillers.

More like this
‘Squid Game’ Creator Hwang Dong-Hyuk Just Dropped A Major Season 2 Tease
By Brian Anthony Hernandez and Bustle Editors
These 25 International Horror Movies On Netflix Prove Fear Is A Universal Language
By Bustle Editors
Is 'The Woman King' Based On A True Story? The Female Agojie Warriors Did Exist
By Radhika Menon
What Does Nancy Jo Sales Think Of 'The Real Bling Ring'?
By Arya Roshanian
Get Even More From Bustle — Sign Up For The Newsletter