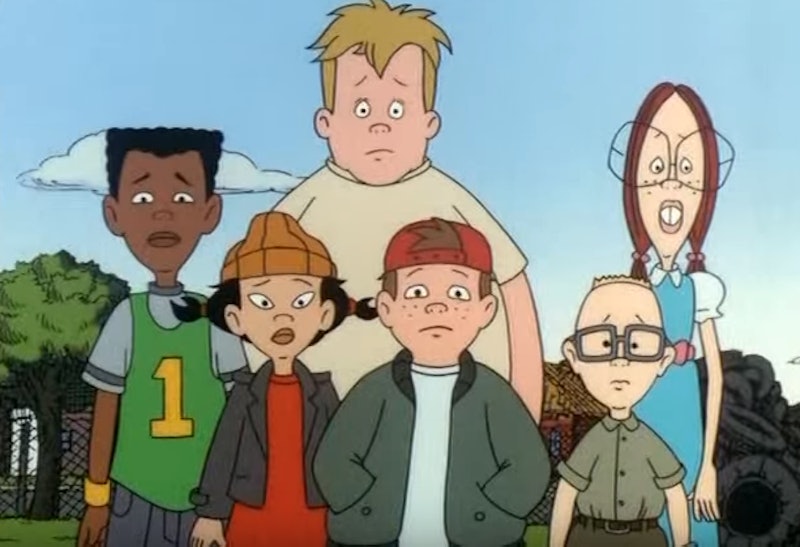 You weren't truly a product of the '90s unless you lived vicariously through the cast of Recess and their many adventures on the school playground. They were basically an extra group of friends that you got to greet when you came home from school, and, of course, you probably tried a few of their shenanigans with your group of friends. Well, the ones that wouldn't involve trying to steal from the principal's office, or would end up with you getting kicked out of school. There was at least one member of the Recess gang that you related to on a deeper level, and who, at times, made you feel like the show was written about you. But what does your favorite Recess character say about you? Trust me, more than you think.

What made this show so genius was that each of the characters — while a bit dramatized — could be found on your very own playground. There were the famous girl cliques, the strange kids who dug around in the sandbox, and the girl who refused to ever get off the jungle gym. You could also relate to every conundrum they faced, and they gave you hope that even elementary school students could change the world with a bit of wit and a lot of charisma. No matter who was your personal favorite, here's what they say about you.

He is the leader of the group. Now, being the leader doesn't always mean you lead people in the right ways, but his hair-brained schemes were always done out of love. He wasn't your typical bad boy, but, instead, he only did "bad" things for the sake of improving life and recess conditions for all involved. If T.J. is your favorite character, first of all, great choice, and it's probably because you like making a little trouble on behalf of others. If you go against the grain or rail against the man, it's probably to improve conditions for others you care about.

Vince was obviously the hottie on the playground. However, he wasn't always your typical jock with a pretty face; he was also a fiercely loyal friend. No matter the task, Vince was always there to lend a hand. He may not have been the mastermind, but he would go down with you just the same. You would do anything for your friends, and do anything to anyone who tried to hurt them. If they're a friend, then you are along for the ride no matter where it takes you, and you have always appreciated Vince's ride or die mentality.

Mikey was just so darn lovable. He was a softie with a heart of gold. No matter what plan they had come up with, Mikey was always the voice of reason. He kept them from getting in too much trouble over the years, but was still always down for a good time with his friends. You are probably referred to as the "stable" friend in all of your relationships. Don't get me wrong, you probably have your days of reckless fun, but you are never too far from control. Your friends can always depend on you to keep them sane.

She was incredibly intelligent, and just what the group needed. Her brains were always the perfect solution to whatever wall they had hit in their plans. Whether it was solving the perfect mathematics equation or creating some concoction to distract Miss Finster, most of their plans could not be complete without Gretchen. If you like Gretchen, then you probably understood all of her science jokes that went over everyone else's heads. You probably are also the brains in your relationships, and people enjoy your wise words of wisdom and intelligent conversation.

Who didn't want to be Spinelli growing up? She was fierce and not afraid to be who she was. She was rocking leather jackets on the playground — that's a girl who doesn't give a crap what anyone thinks. If you enjoyed Spinelli, then it's because your confidence radiates through every ounce of your being. You can rock a leather jacket, throw on some boots, and kill the game without saying a single word. If she was real, I'd like to think she would be the ultimate feminist fighting the good fight on behalf of all women.

If Mikey was the dependable voice of reason, then Gus was the scaredy cat afraid of his own shadow. OK, I know he wasn't all bad, but many a plan was almost ruined on account of Gus. Although finding a group of friends for the first time in his life always caused him to do everything in his power to fix or repair anything out of place. Gus might be your favorite if you have ever related to feeling out of place and looking for a little acceptance, and found a tribe of loyal friends to go through life with. While you may not be used to the ways of friendship, they have stuck by you, and you would do anything to not burn those bridges.

He was sneaky, conniving, under handed, and downright despicable. However, everyone has a redeeming factor to them, and it's no different for Randall. Although he may have been looking for reasons to snitch at every corner, when it came down to it, he did save their skin more than once. If you like Randall, then you should probably take a long look at yourself in the mirror and ask why? Or maybe you revel in his openness to stand up — and tell on — the things in this world he believed to be wrong. Snitching isn't always a bad thing, and you probably understood that very well.

She's the old woman we all hope we will grow up to be. On the surface, she was a grump, but, as you know from the movie, she had a whole past before she was a teacher. She was a feminist, an enforcer, and a beautiful masterpiece of a woman, even if she always wanted T.J. to do better. If Miss Finster is your favorite, it's probably because you know what it means to live several lifetimes. And not just age wise; she always seemed like she had tons of stories to tell. You are probably an old soul, but you wouldn't have it any other way.

Recess was a timeless classic. It's the kind of show you can re-watch now and find more reasons to love. So take a bit of your time and visit your old friends from Third Street Elementary School.