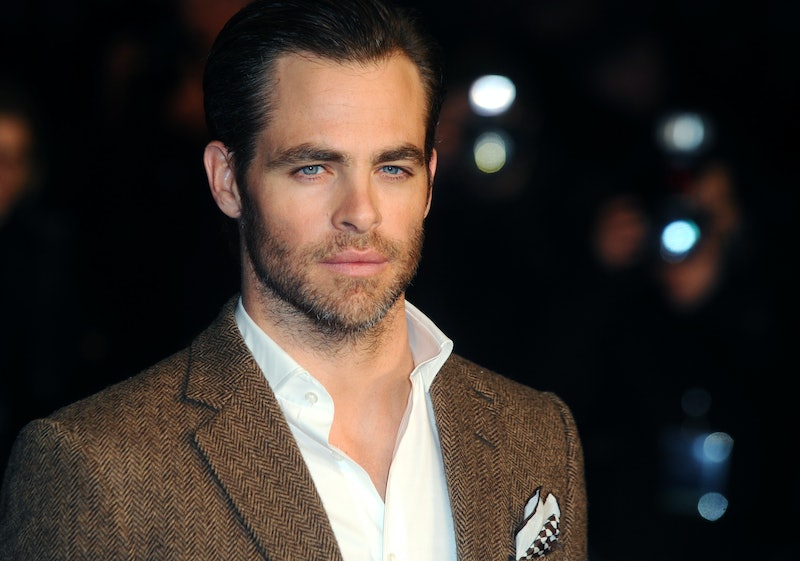 Chris Pine, guys. Chris. Pine. He's a movie star, so it's pretty much guaranteed that he's going to be breathtakingly gorgeous, but does he really have to be good at other things, too? Like, do you have to rub it in, Chris Pine? Because Pine flexed his singing chops on Jimmy Kimmel Live recently, and it's got us even more interested in that Into The Woods adaptation he's starring in.

Pine's moment of song on Kimmel came at the behest of Meryl Streep, who sang (wordplay unintended but appreciated) the praises of his voice to Kimmel and gently dropped the hint that Kimmel should force him to sing on national television. And so he did — he sang a few bars of "Fly Me To The Moon" whilst holding Kimmel's hand and it was beautiful. "Wow, I'm falling in love," said Kimmel. Same, dude. Same.

Pine will be playing Cinderella's Prince to Anna Kendrick's Cinderella in the Rob Marshall-directed adaptation of the Steven Sondheim/James Lapine musical, so it's nice to see that he at least sounds pleasant. Basically, we might not get the powerhouse voices we might be used to in Into The Woods with this adaptation, but at least we're one step closer to being able to rest easy that this isn't a Pierce Brosnan in Mama Mia situation.

More like this
The 'Love, Lizzo' Harry Styles Scene Is Just 1 Moment That Made Fans Feel Seen
By Brad Witter
This James Bond Event At Abbey Road Studios Was A 007 Fan's Dream
By Samantha Rollins
North West Has Mastered The Wednesday Addams & Lady Gaga TikTok Dance
By Jake Viswanath
The Britney Spears Disney Princess Musical Is Finally Opening On Broadway
By Jake Viswanath
Get Even More From Bustle — Sign Up For The Newsletter