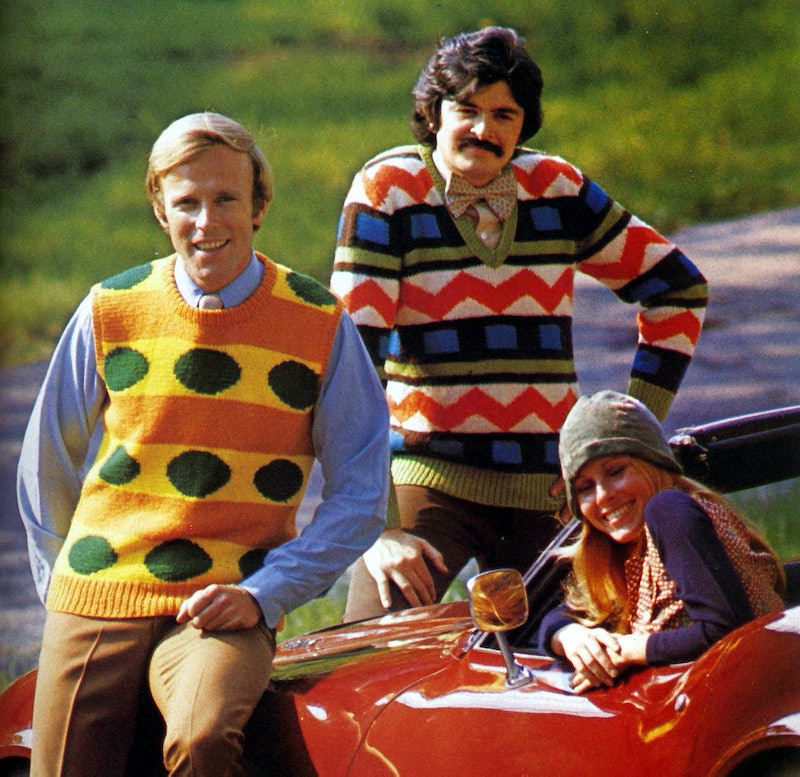 If you had to rank your tendency to be affectionate, on a scale from “never” to “always,” what would you say? What about cheerfulness? Or your ability to stand up for your beliefs? And would you see these traits as markers of your masculinity or femininity? These questions come from the Bem Sex Role Inventory (BSRI), a survey developed in 1974 to measure how people adhere to traditional notions of gender. It’s been used in gender research for decades, and often crops up in Psych 101 classes as an activity for students. I did the BSRI today, and the experience has led me to draw two scientific conclusions: (1) The ‘70s had some weird, outmoded ideas about gender, and (2) Things have changed. (THANKFULLY.)

The BSRI asks respondents to rank 60 personality traits according how strongly they see them in themselves, on a seven point scale from “never” to always.” In the test, the 60 traits are mixed together without any apparent separation, but actually they are comprised of three categories: 20 are supposedly “feminine,” 20 are “masculine,” and 20 more are “neutral.” Some of the gender distinctions seem fairly obvious, even if they seem really outdated now (For example, “athletic” is coded as masculine, and “gentle” as feminine), while others are total head scratchers to me (Apparently loyalty is a feminine thing?).

At the end of BSRI, you get a score that tells you how you rank along three lines: Masculine, feminine, and “androgynous” (neither masculine nor feminine). Some test-takers might be quick to interpret these scores as a statement about their own gender, but that isn’t the case. The BSRI is actually saying something more complicated — and for that, we need…

The BSRI was developed in the 1970s by psychologist Sandra Bem as a way to evaluate the extent to which test subjects align themselves (or don’t align themselves) with cultural definitions of gender. It’s important to note that the gendered characteristics Bem included in the test (“yielding,” “aggressive,” etc.) were traits that Bem thought were central to social constructions of gender — not biologically innate facets of being male or female. So the test isn’t suggesting that being “soft spoken” is something inherent to women, but that being soft spoken — in the 1970s, at least — was a trait that society regarded as desirable in women.

Bem developed the BSRI as a way to study androgyny and the ways that people don’t always conform to stereotypes of masculinity and femininity. In assuming that all people have both masculine and feminine qualities, the BSRI allowed for a more complex view of gender than previous models. But although the BSRI was intended to question traditional distinctions of gender, the test has been criticized for having the opposite effect. After all, one could argue (and people have) that the very nature of the BSRI only reinforces gender stereotypes by categorizing human personality traits — which are not intrinsically gendered — as masculine or feminine. If the point of the BSRI was to show that we are all a mix of so-called “masculine,” “feminine,” and “androgynous” characteristics, what is the point of giving those traits gendered labels at all?

In an article looking back on decades of research using the BSRI, scholars Rose Marie Hoffman and L. DiAnne Borders question the BSRI’s usefulness and suggest that the test has frequently been misused. They write, “Results of myriad studies using the BSRI are misinterpreted by researchers to confirm hypotheses that lack adequate theoretical support.” In her later years, Bem herself proposed a more complex view of gender than the one the BSRI was designed to measure. She argued, “[H]uman behaviors should no longer be linked with gender, and society should stop projecting gender into situations irrelevant to genitalia.”

So what happened when I took the test?

Making my way through the 60 questions was an odd experience. I knew the basic purpose of the test, and could tell, for at least some of the questions, which traits would be coded as “masculine” or “feminine.” So I question how a self-reported test like this could be valid, with me sitting there, trying to figure out what my choices would say about my supposed gender alignment. Needless to say, I approached my results with a fair dose of skepticism. After completing the survey, I got my results:

I’ll admit that I stared at those three numbers rather blankly for a few minutes. What was I supposed to get from this? Were these results supposed to be revelatory somehow? Here are the basics of how to interpret these scores:

My results show that I exhibit so-called “masculine” traits and “androgynous” traits, but that I skew toward femininity, at least as it was defined by a limited group of people in 1974. TBH, I’m not particularly surprised by the results. As a card carrying feminist,* am I supposed to feel bothered that I apparently fall into the parameters of 40-year-old cultural expectations of femininity? I’m not. Really, I think that the most interesting part of taking this test isn’t what it may or may not say about me — it’s what it can show us about gender conventions, and how those have evolved over time.

In their 2001 retrospective of the BSRI’s long career, Borders and Hoffman surveyed a group of undergraduates to see how they felt about how the BSRI categorizes masculine and feminine traits. When Bem designed the BSRI in the early 1970s, she surveyed undergrads about socially desirable traits for men and women, and they agreed with the ones she included.

Borders and Hoffman got very different results: Of the 60 traits on the test (20 “masculine,” 20 “feminine,” and 20 “neutral”), only two were regarded as “masculine” or “feminine” by 75 percent or more of the students. And those two were fairly obvious; students agreed that “masculine” is a masculine trait, and “feminine” is a feminine trait. All other 58 traits were either regarded as gender-neutral or lacked the consensus to categorize as one gender or the other.

Our society still feels frustratingly plagued by constricting and unrealistic expectations about gender, but this survey shows that, at least in regard to this single test, our conceptions of gender, and what it means to be “masculine” or “feminine,” are becoming more flexible over time.

You can try out the BSRI for yourself here.

* Just kidding. We don’t have cards. I only WISH we did. They would be covered in equality and glitter.