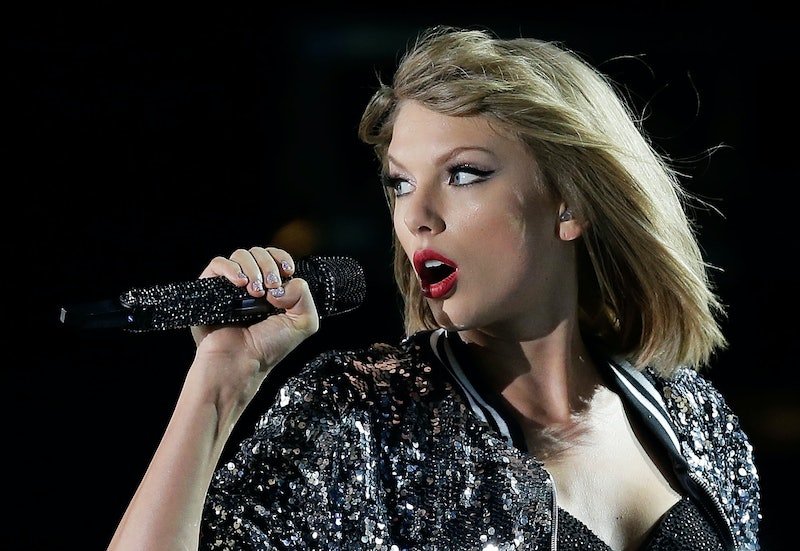 If there's one celebrity who knows how to celebrate the holidays, it's our girl Taylor Swift. The 1989 songstress is kind of a pro at all things Christmastime, and it could all stem from the fact that this girl happens to have a December birthday. (In fact, Swift threw herself a Christmas themed birthday bash this year, just to prove that she's a true Santa baby at heart.) We already know that baking cookies, decorating Christmas trees, and gift-giving are quintessential Swift things, but it's this latest tweet from Swift that has truly won Christmas. (Seriously: can I pleaseeee get invited to Swift's holiday party next year? I promise to bring the fruitcake.)

So what did Tay Tay do this year that really got her fans into the Christmas spirit? It all had to do with an outfit that the typically fashionable pop star donned as a nod to fabled Christmas characters. Rather than slipping into a Santa outfit or throwing on a pair of reindeer antlers, Swift went all out for her holiday season and transformed herself into an elf. The result? Absolutely priceless.

Of course, Swift is a little tall for a traditional elf — but heck, she has so much Christmas spirit that even Santa wouldn't kick her out of the workshop because of it. Check out Swift's awesome attire:

The fact that Swift turned Drake's "Hotline Bling" into a Christmas tune is just the icing on the cake of this epic holiday tweet. I can't help but wonder if this tweet is secretly announcing Swift and Drake's new Christmas mashup — because that's the gift that just keeps on giving.

Happy holidays, from Swift's house to yours.