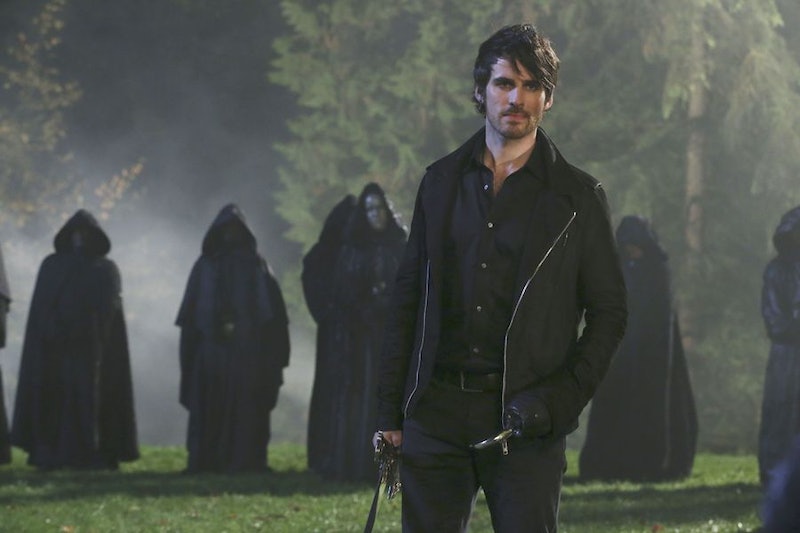 Now that the first half of Once Upon A Time Season 5 is over, we've got a few months to decompress, process, and mourn the death of the show we knew and loved so much for the first four seasons (well, three and a half-ish, maybe). After the potentially amazing Dark Swan storyline turned into a Dark Hook crapfest that destroyed one of the show's most amazing characters while stealing screen time from the other, infinitely more worthy ones, we were left with a mid-season finale that hit all-time ratings lows and caused a mass exodus of longtime fans who were finally fed up with the nonsense. I'm sticking around because I'm weak and my Swan Queen 'shipping heart doesn't know how to quit the Emma and Regina dynamic, but it seems like there might be an important payoff for everyone in Season 5B: Hook might stay dead in the Underworld.

Sitting in the EW Hot Seat, executive producers Eddy Kitsis and Adam Horowitz answered (well, vaguely hinted at) fans' "burning" questions (hyuck hyuck — see what I did there?) about the Underworld. We already know we're going to be meeting Hades, Hercules, and Megara, but what else is going to happen? Emma's plan to split her heart with Hook to bring him back is not only pig-headed and completely uncharacteristic, but it's obviously going to fail, thank goodness. But as long as Regina's hero storyline finally comes full circle and the gang comes back to Storybrooke without Captain Guyliner, this show just might stand a chance of getting back on track.

Kitsis and Horowitz did give us a few concrete facts: we won't be spending the entire second half of the season in the Underworld (which we pretty much knew already, since we'll be visiting Zelena and "Warrior" Dorothy back in Oz at some point), and also, just because you're in the Underworld doesn't mean the rules of mortality have changed. You can still kill and be killed, and there are going to be "new consequences" to face up to that will be explained when we get there, as well. But what about Hook? Are we really going to have to bring him back?

Kitsis offers a bit of hope to those of us who are sick of the pirate: "He may die there. To be honest, he’s already dead. He may rot there." Ooh, is that a promise? After all, the whole new Dark One scenario was never supposed to be about Hook to begin with. It was meant to be about Emma confronting what her life could have been, and navigating the difficult dilemma of choosing the right path even when the wrong one seems so inviting. It was going to be incredibly introspective and allow Emma to grow even more as a character. Instead, some Captain Swan 'shipper seems to have turned a fanfic into an actual TV script and Once — a self-proclaimed "family show" that was always about strong women who didn't need men to do anything — into Twilight lite.

It's a shame, truly. Colin O'Donoghue seems like a lovely guy, and certainly the character of Hook made a wonderful villain that we all loved to hate in his early days. But suddenly painting him as some tender-hearted lover who only maimed, murdered, abused and generally treated women like complete and utter crap because of all his manpain from a bad childhood is not only unbelievable, it's gross. If you want to see how a redemption story is done right, you need look no further than Regina Mills, who's spent several years atoning for her lengthy list of sins and proving that she's changed for the better, even when being the worst would be that much easier. Hook hasn't earned such lionization from Emma or the general audience, and he certainly won't be getting it from me.

So will we get the old Emma of Season 1 back? Kitsis and Horowitz don't think there was ever a problem, but they've promised that we'll "absolutely" see "badass" Emma again, but considering they don't see where they went wrong, I'm skeptical on their ability to fix things, but I suppose we'll just have to keep our fingers crossed. The best thing that can possibly happen is that this journey to the Underworld serves as the awakening for Emma that her journey as the Dark One was meant to be. Hopefully, it allows her to regain some of her earlier independence and strength that made her the Emma we knew and loved — not to mention leaves room for some of the other main characters to get the development they deserve, too (love you, Regina). We'll have to wait until March to find out.