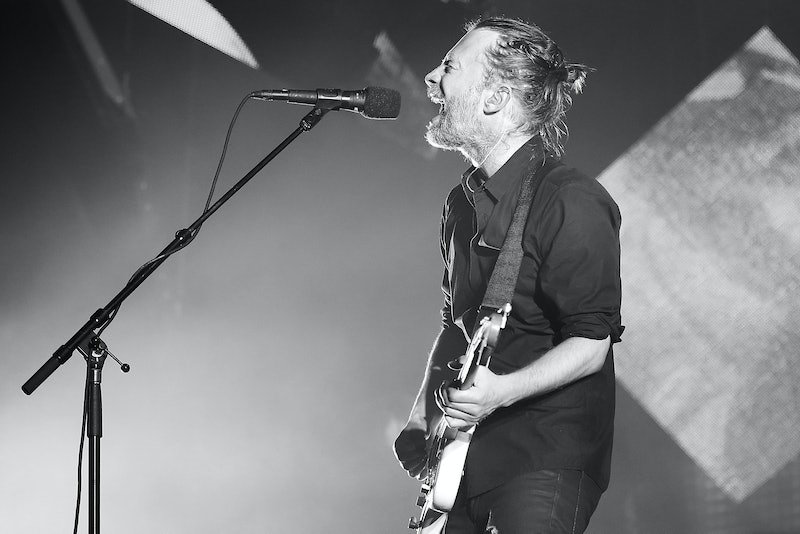 While the honor eventually went to Sam Smith, it turns out that he wasn't the only artist to record a James Bond theme in 2014 — Radiohead recorded James Bond theme for Spectre as well. On Christmas, singer Thom Yorke took to his Twitter to announce and release the song. "Last year we were asked to write a theme tune for the Bond movie Spectre," he wrote. "Yes we were. It didn’t work out, but became something of our own, which we love very much. As the year closes we thought you might like to hear it. Merry Christmas. May the force be with you." He then posted the Soundcloud link to the track, which is available for download.

The song itself is similar to Sam Smith's compilation in its moodiness and sadness — not to mention that both Smith and Yorke are known for their falsettos. However, unlike Smith's theme, "Writing's On The Wall" — which you can listen to here — Radiohead's version features more of a beat and a swelling string crescendo.

It's actually a pretty great Radiohead song, and for good reason: The band is known for a cinematic sound, and neither Radiohead, nor its solo members, are strangers to soundtracks. Here are other times the band has leant their music to films, which met with better fates than their Bond theme.

This was one of the only songs Radiohead actually wrote for a movie. "Exit Music (For A Film)" notably played over the end credits of Baz Luhrmann's Romeo + Juliet, and later appeared on their album OK Computer.

As David Ehrlich noted in a fantastic piece for The Dissolve, this 2014 indie science fiction movie was strangely the first use of Kid A's cinematic and cinematically titled "Motion Picture Soundtrack," and it luckily did not go to waste.

The first use of Radiohead in a movie was, of course, the Pablo Honey hit "Creep." This very '90s film starring Reese Witherspoon and a grungy soundtrack is definitely worth checking out.

The Cameron Crowe sci-fi film made really good use of Radiohead's foreboding "Everything In Its Right Place" in its first scene.

This award winning climate change documentary featured over ten Radiohead songs, as the cause was apparently close to Yorke's heart.

Perhaps one of the most unexpected uses of Radiohead, "15 Step" played during the vampire movie's end credits. Yorke himself apparently expressed interest in writing songs for future Twilight films.

In this scene from Clueless, Cher describes an acoustic version of "Fake Plastic Trees" as "the maudlin music of the university radio station." It's pretty hilarious, especially if you consider that director Amy Heckerling mostly included the then-obscure band to make fun of them.

These are just a few of the many times that Radiohead has been prominently featured in movies, and it won't be the last. Who knows, maybe "Spectre" will appear on a future album, or be reworked in another Bond film?