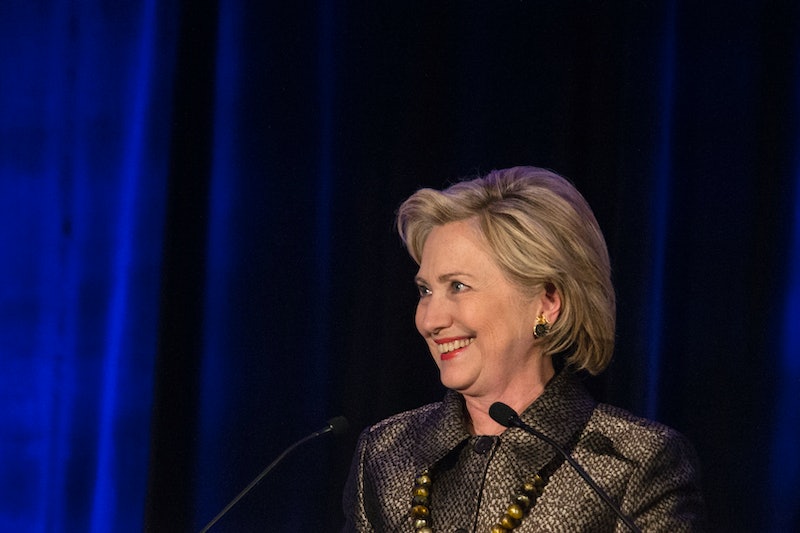 It might have been holiday week, but that doesn't completely stop the news cycle. From the lack of an indictment in the death of 28-year-old Sandra Bland to the Supreme Court setting the date for oral arguments in one of the biggest abortion rights challenges in recent history, this week was pretty tumultuous for women's rights in America. Fortunately, American women have the following people — including a new actress riding on the feminist-celeb train — to back them up in the new year. Here are some of the best feminist quotes from this week.

Although many actresses have publicly shied away from the "feminist" label, Indian actress Priyanka Chopra, who currently stars on the ABC drama Quantico, fully embraced her feminist identity when making the rounds in the press junket this week. Chopra called herself an "extremely proud feminist," adding:

I am someone who believes feminism is just a conversation about equality. It is not about hating or berating men. For eons, women have been treated as second class citizens and it's high time we are given the due credit.

Bernie Sanders Stands Up For Women Of Color

Democratic presidential candidate Sen. Bernie Sanders spoke out against the lack of criminal indictment in the death of Sandra Bland, a 28-year-old African-American woman who was found dead in a Texas jail cell three days after she was arrested during a routine traffic stop in July. Sanders has been critical of Bland's arrest and mysterious death — authorities say she committed suicide — since her story gained national attention earlier this year. But in a statement this week, Sanders addressed the racial prejudice working against Bland and all women of color in America:

Sandra Bland should not have died while in police custody. There’s no doubt in my mind that she, like too many African Americans who die in police custody, would be alive today if she were a white woman. ... We need to reform a very broken criminal justice system.

Democratic presidential candidate Martin O'Malley, the former Maryland governor, also spoke out against the non-indictment. On Twitter, O'Malley used the #SayHerName hashtag, but also called for an overhaul in America's criminal justice system.

The New York Times Editorial Board Gets Real

In an editorial published Sunday that doubles as a rousing call to action, The New York Times editorial board took on the great "reproductive rights rollback" of 2015, painting a picture of a bleak reproductive health landscape with an even bleaker future. Since 2011, nearly 290 abortion restrictions have been enacted in the United States, and as The Times notes, there are plenty more to come:

The trend accelerated in 2015, as state legislators passed 57 new constraints on a woman’s right to choose. Hundreds more were considered, most of which could come up again in 2016. Most of the time, lawmakers are clever enough to disguise their true intent by claiming that their interest is in protecting women’s physical or mental health. But now and then the facade falls away, as when the Mississippi governor, Phil Bryant, called a set of restrictions he signed into law in 2012 “the first step in a movement” that aims to “end abortion in Mississippi.”

The abortion law that's on everyone's radar is HB 2, the omnibus Texas law scheduled to go before the Supreme Court on March 2, 2016. According to The Times, the law's intent is obvious: It places an undue burden on Texas women and interferes with their legal medical rights:

By any reasonable measure, Texas’ law places an undue burden on women seeking abortion services and should be struck down. Beyond doing that, the justices must send a clear and broad message affirming the constitutionally protected right of women to determine the course of their reproductive lives. Political opponents have shown how quickly they can regroup and find ways to restrict or obliterate programs and services women need.

Republican presidential front-runner and sexism personified Donald Trump made some more degrading comments about Hillary Clinton while out on the campaign trail this week. At a campaign stop in Iowa, Trump roused his supporters by saying Clinton "got schlonged" by Barack Obama in the 2008 Democratic primary. He also described Clinton taking a bathroom break as "disgusting," because Lord knows proper women never go to the bathroom.

Clinton responded by doing her best Lucille Bluth, “I don’t understand the question and I won’t respond to it” impression:

I don’t respond to [Trump] personally, because he thrives on that kind of exchange,” she said. “I think he has to answer for what he says, and I assume that others will make the larger point about his language. It’s not the first time he’s demonstrated a penchant for sexism.

Kill him with that shoulder brush, Clinton.