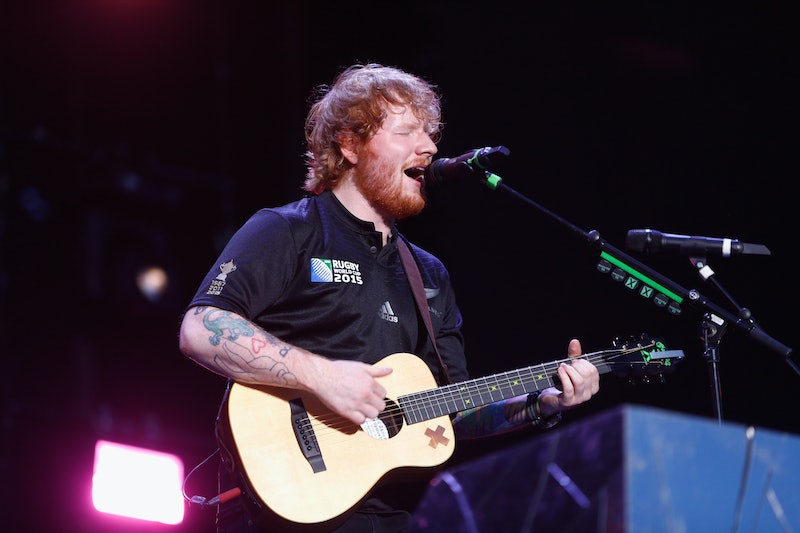 In a very cool expression of his love for his Irish lineage, Ed Sheeran has recorded "Thinking Out Loud" in Irish Gaelic, the historic language of Ireland. Sheeran sang a translation of the hit song for the Irish radio station Raidió Rí Rá annual Gaelic-language album. According to Irish Central, Irish band Seo Linn translated the song, and TV personality Eoghan McDermott helped him sound out the words. It's a pretty gorgeous version of the song, and while I'm no expert, Sheeran seems comfortable singing in the language.

The British singer-songwriter has often expressed his affinity for Ireland (though he's from the UK, his lineage is Irish) — he even has some Gaelic tattoos! Irish Gaelic, or Gaeilge, is still taught in Ireland, but often as a second language, with most Irish people primarily speaking English. It's thus a nice gesture of Sheeran to bring international attention to an often forgotten language, and provide the people of Ireland the experience of hearing an international pop star sing in their ancestral language for the first time.

He's certainly not the first artist to learn their hit songs in languages other than their own.

And now, here are a few other artists who have branched out into other languages:

A lot of Motown artists recorded their songs in German, which are pretty fun to listen to. Check out this cover of "Where Did Our Love Go."

Bowie performed his song "Heroes" in lots of different languages, including French and German.

Charlie XCX recorded her hit "Boom Clap" in Japanese for a Japanese edition of her album Sucker. It's really catchy.

Beyoncé sang a really beautiful version of "Irreplaceable" in Spanish.

Who knew the Stones recorded a pretty beautiful Italian version of "As Tears Go By"?

When the Beatles were starting out, they had a lot of German fans, so they performed German versions of "I Want To Hold Your Hand" and "She Loves You."

The Swedish band typically sang in English, but highlighted their international appeal by also singing in Swedish, German, and Spanish.

Michael Jackson recorded this beautiful version of "I Just Can't Stop Loving You" in Spanish.

Beck has recorded in Spanish multiple times during his career, including in this version of "Jackass" called "Burro."

The Colombian singer performed many of her songs initially in Spanish, but also performed Spanish versions of her English language hits, such as "Hips Don't Lie."

The singer and actress is of Mexican descent, and while she admits to not speaking Spanish as well as she would like, she has recorded quite a few of her songs in Spanish — including this polished version of "A Year Without Rain."

Gabriel took a cue from the Beatles, and performed a version of his song "Games Without Frontiers" in German.

Carey performed a totally gorgeous version of her song "#Beautiful" with Miguel in Spanish.

Madonna performed a Spanish version of her song "What It Feels Like For A Girl" on tour in 2001.

As anyone who's tried out another language in a class or foreign country knows, it can be a pretty frightening experience to speak an unfamiliar language, let alone sing in it. So props to these singers for taking the leap in order to make their fans from around the world smile.