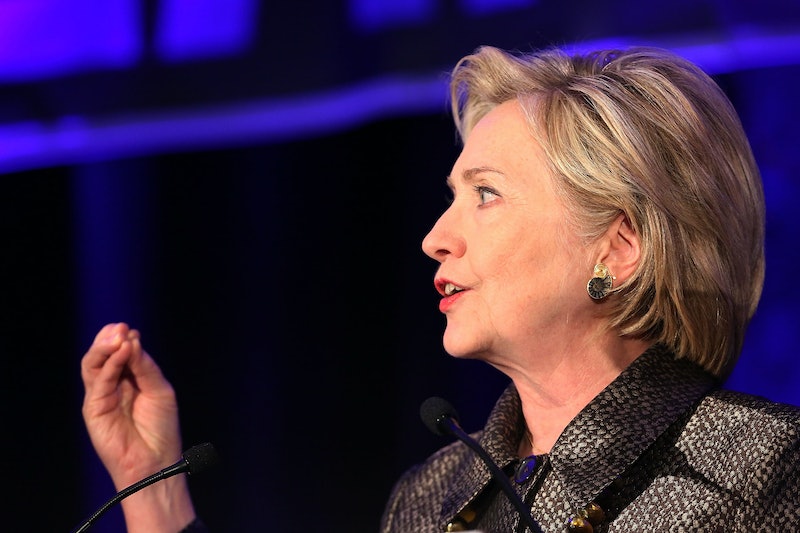 On Sunday, Republican presidential candidate Donald Trump accused Hillary Clinton of "playing the woman's card." And just before that, on Saturday night, Trump argued in a tweet that Bill Clinton has "demonstrated a penchant for sexism" — the same words Hillary Clinton used to describe Trump earlier this week.

Trump implied that the Democratic frontrunner was being hypocritical in her decision to let her husband campaign for her, and called Bill Clinton "fair game because his presidency was really considered to be very troubled because of all the things that she's talking to me about." Essentially, Trump is responding to Clinton's claims that he is sexist by saying that her husband is also sexist, so she shouldn't try to "play the woman's card" by calling him out — whatever that means.

Here's something — or rather one of many things — Trump does not seem to understand about sexism. If a woman calls you out on sexism, it doesn't mean she's "playing the woman's card," in the same way that if a person of color calls you out on racism, they are not "playing the race card." Systems of oppression are not analogous to card games. Rather, they perpetuate real ways in which marginalized people — in this case, women — are rendered politically, socially, and economically unequal to people in positions of power and privilege.

In the aftermath of the above tweet, Trump gloated that he "turned her exact words against her." But Trump's campaign has long been attacking the Democratic frontrunner on the basis of her being a woman, rather than on concrete policy differences. In fact, earlier this week, Trump spokeswoman Katrina Pierson appeared on CNN to claim that Clinton had bullied women to hide her husband's "sexist secrets," and that the Clinton campaign acts like "9-year-old girls" when criticized.

So perhaps Clinton was right to say that "I don't respond to him personally, because he thrives on that kind of exchange ... I'm not sure anybody's surprised that he keeps pushing the envelope." Trump's campaign thrives on hatred and fear, so it's not a huge shock that he keeps going after Clinton's feminist rhetoric. However, it's still important to publicly call out and condemn comments like his "woman's card" statement because while he is only one person, he is one person with a lot of power and influence, and he's certainly not the only one who holds such beliefs.

Bill Clinton's own behavior is not an excuse for Trump or anyone else to attack Hillary Clinton's identity as a woman. She should never have to justify being a woman, and her feminism should not be boiled down to "playing the woman's card." And as for Trump — just because Clinton (justifiably) called him sexist does not mean he is entitled to throw a temper tantrum about her not acknowledging other people's sexism. In fact, his reaction just proves what she has been saying all along: He certainly has "demonstrated a penchant for sexism."