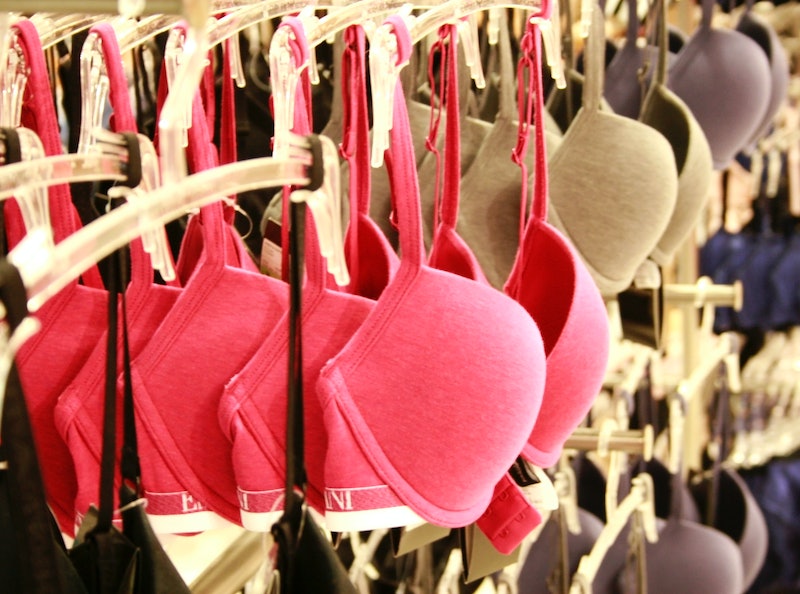 Recently, lingerie company True&Co. announced the advent of the "Try-On" truck, a mobile shop offering free fittings and the opportunity to try on bras in a nontraditional environment, aka somewhere that's not an icy, fluorescent cave deep in the bowels of a department store. The truck plans to make stops in major U.S. cities across the country, starting in San Francisco on Jan. 12 and ending on the East Coast 12 months later. Basically, it's a food truck for lingerie — something that sounds like the set-up for an Amy Schumer sketch, but it's gloriously real.

Staffed by True&Co.'s "fit therapists," the truck's fitting process is simple. To determine which fit and style suits you best, each visit begins with a quick online quiz (available through the company's website) that asks questions beyond mere band and cup size. Instead, it focuses on things like breast shape, whether your straps dig in, how your breasts fill the cup, and so on. Using an algorithm, the quiz determines your "True Spectrum" color rather than a bra size. This personalized profile gives suggestions for bra sizes, styles, and brands for you to try on, which you can proceed to do in the Try-On truck's fitting rooms.

"It doesn't matter if you are a 32C or a 32B; the band and cup size tell only half the story," True&Co. founder Michelle Lam told Fast Company.

According to PSFK, the mobile shop was inspired by the tiny-home movement and designed to look like a California storefront. It joins a growing number of fashion trucks hitting the road in recent years, including Los Angeles' Le Fashion Truck and New York City's Nomad. In fact, fashion trucks have become so popular that Business Insider profiled the movement last year, although True&Co. is the first to exclusively focus on bra fittings.

The Try-On Truck plans on making its way through Houson, Boston, New York City, and more over the course of the tour — and I don't know about you, but I'll be spending the next 12 months trying to telepathically get the truck to visit my city.