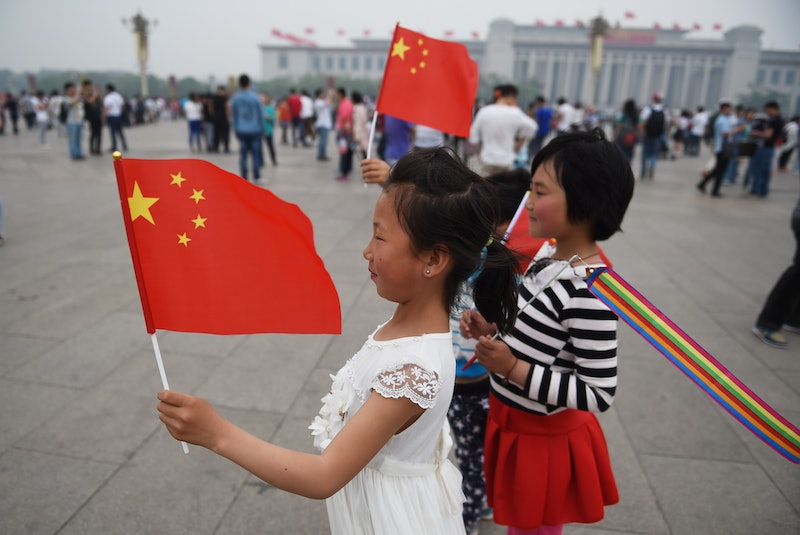 After decades of government regulation over the number of children allowed in a family, China has officially lifted their controversial one-child policy. The decision was legitimized by Chinese policymakers on Sunday during a meeting of the National People's Congress Standing Committee, a de facto legislative body that interprets and directs Chinese laws. The state is officially permitting Chinese couples two children beginning on Jan. 1, 2016, in an effort to balance the skewed Chinese population.

In the late 1970s, the one-child policy was implemented — as part of an overarching family planning policy — to control China's rapidly growing population. It was a temporary measure intended to curb the demands for water and resources, which were (and remain) endangered in some areas of the country. The policy was enforced through fines based on a family's income and other related factors, but local officials also pushed abortions and forced sterilizations when the fines weren't effective. There were some exceptions to the policy; for instance, ethnic minorities were not required to abide by it. Despite majority support for the one-child policy in China, likely in part due to the perspective that the contentious legislation helped improve the large Chinese economy, the government fears for the future of its people.

China is threatening to have the most elderly population on Earth in the next 15 years, with over 400 million people over age 60. Policymakers are concerned about Chinese social services and healthcare, since smaller, younger generations will inevitably care for a vast, elderly population. Additionally, they worry the country will become old before they harness enough wealth to care for their elderly.

How will this affect the population? It may not, drastically at least; after a minor lift of the one-child policy in January 2014, which permitted couples of whom one was an only child to have a second baby, fewer couples than anticipated applied for permission to do so. In Beijing, 50,000 couples were expected to apply, but only about 30,000 submitted applications. There were similar findings in other large cities, like Shanghai and Shenzhen, where couples expressed concern for their financial expenditure.

As for the coming decades, China's population will likely peak in 2030 at around 1.43 billion people under the two-child policy, which is not far from how it would look if the old policy remained. Projections under the one-child policy show a population peak around the same time, but at 1.42 billion people. However, if every biologically-fit couple were to hypothetically have two children beginning on Jan. 1, 2016, the Chinese population projection peaks five years later (in 2035) at 1.46 billion people. As it stands, the two-child policy is a win for personal autonomy and biology, but its effects on the environment and China's people will have to play out.