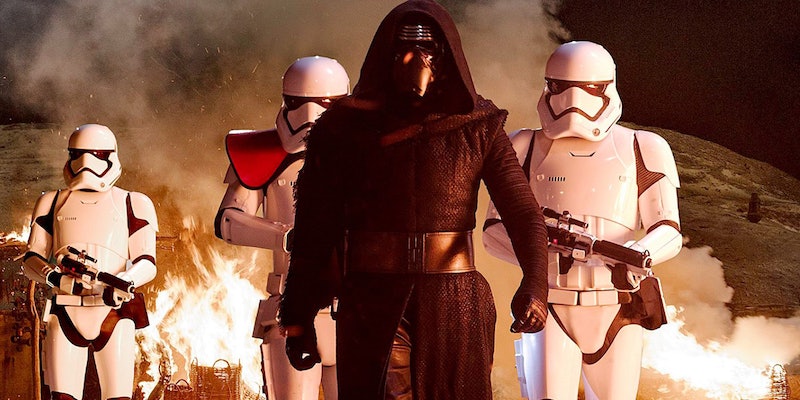 Star Wars: The Force Awakens — that title just seems to roll off the tongue and break massive amounts of box office records these days, doesn't it? But it wasn't always this way. According to a member of the Lucasfilm story group, the original title of Star Wars: The Force Awakens was Shadow of the Empire . Pablo Hidalgo, a creative executive with Lucasfilm, tweeted the revelation about the Episode VII title, which fans will realize has actually been (kinda) used by the Star Wars universe before. And let's face it — the title change was ultimately for the better, even if it interesting to contemplate.

As for its origins, Shadows (plural) of the Empire is an "expanded universe" Star Wars novel by Steve Perry released in 1997 and it takes place between The Empire Strikes Back and Return Of The Jedi. The story even became a Star Wars video game and was canon until April 2014, when Star Wars creator George Lucas declared the expanded universe of all post- Return of the Jedi stories, novels, and games as an "alternative reality" called Star Wars Legends. Still with me? While that left Shadow(s) of the Empire as an available title, Lucasfilm ultimately went with The Force Awakens for the new movie— but if you want to get super nerdy about it, Hidalgo is currently discussing what's canon and what's not on his Twitter.

In my humble opinion, I think Shadow of an Empire sounds like an ominous title, while The Force Awakens sounds like a much more optimistic name to usher in a new era of the space saga. Still, TFA isn't the only movie to ever go through a name identity crisis. Here are some other flicks that also changed their titles for the better.

According to IMDB, this 1990 classic rom-com starring Julia Roberts once went by the name Three Thousand or 3,000 — which was the amount of money co-star Richard Gere's character paid to spend the night with Roberts' call girl character. With a number title like that, it could've been easily mistaken as a sci-fi flick set in the year 3000.

According to NPR, the '90s teen sex comedy was once known as Teenage Sex Comedy That Can Be Made for Under 10 Million Dollars, That Your Reader Will Love But the Executive Will Hate. Unfortunately, that Hollywood insider-y name was proven wrong, because some exec out there did love it, made it, and released it to an audience that still loves it.

It's weird to think it, but E.T. wasn't always E.T. Well, the name of the alien was the same, but the movie once had a different moniker. According to IMDB, the 1982 classic was known as A Boy's Life , which sounds like it could've been an alternate title (or prequel) to Boyhood.

John Travolta became a star after he stole the show in this 1977 film, which was almost called Saturday Night or Tribal Rites of Saturday Night , according to IMDB. The latter sounds like the movie would've taken place at a much different kind of '70s disco.

The 2008 Will Smith flick was originally based on a script called Tonight, He Comes — and yes, that title refers to sex. The original script made the rounds on the internet with the unimpressive original title and storyline, according to iO9.

Ridley Scott's 1982 classic sci-fi movie was based on Philip K. Dick's 1968 novel Do Androids Dream of Electric Sheep? and the movie almost took its title, too, according to NPR.

Remember when Beyonce and Idris Elba were in a movie together? This 2009 melodramatic thriller paired the two powerhouses together as a couple who get torn apart by an obsessed (ahem) stalker. But the film was originally known as Oh No She Didn't — which makes the drama sound more like a wacky comedy that may or may not involve the LiveJournal gossip website with a similar name.

So, it's pretty clear — don't judge a movie by its original title, because hopefully it'll change for the better.