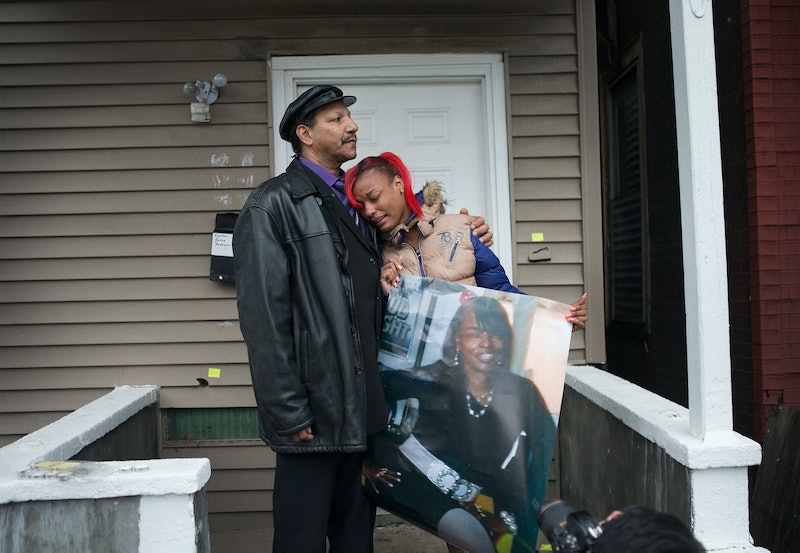 Chicago police officers fatally shot two people in the West Garfield Park neighborhood on the city's West Side early Saturday morning during a response to a domestic disturbance call. In the confrontation, Chicago Police Chief of Detectives Eugene Roy said, an officer fired shots, and one woman was "accidentally struck and tragically killed." So who was Bettie Jones, the victim who police say was accidentally killed by gunfire?

Jones was a 55-year-old Chicago native, mother of five, and grandmother of 10. Just before her death, she had celebrated Christmas with 15 family members in her apartment, sharing food and playing card games during what her brother Melvin Jones described as an "excellent" Christmas gathering. Jones was a longtime employee of a local Chicago bakery and a member of the activist group Action Now, "a grassroots community organization of working families fighting for change," which campaigned for higher minimum wage in Chicago and led protests against the shooting death of Michael Brown in 2014. According to her youngest brother, Robin Andrews, Jones had been battling ovarian cancer and was already fighting for her life when she was killed.

"She was the kind of person who would come home after a 16-hour shift and then ask you if you needed anything," Andrews said in a statement to DNAinfo. "She was always trying to help, sharing whatever little food she had in her fridge. She was one of a kind like that." Community leaders planned a prayer vigil outside Jones' house Sunday afternoon to celebrate the life and mourn the loss of the beloved sister, mother, and grandmother.

The situation leading up to Jones' death began with an alleged domestic violence situation in the multi-family residence. Quintonio LeGrier, who was suffering "mental problems," according to his parents, reportedly became aggressive against his father, Antonio LeGrier, and began threatening him with a baseball bat.

LeGrier's father told the Chicago Sun-Times that he called Jones, who lived underneath the LeGriers with her boyfriend, and told her not to open her door unless police came. When the police did arrive at around 4:20 a.m. Jones was reportedly asked by police to open her door, and around that time, Jones and LeGrier were both shot by a single officer. According to Antonio LeGrier, the officer yelled "F—, no, no, no. I thought he was lunging at me with the [baseball] bat," immediately following the incident.

Latisha Jones, Bettie Jones' 19-year-old daughter, told Chicago Tribune that she was awoken by gunfire and found her mother on the floor of her apartment with a gunshot wound to the neck. "She wasn't saying anything," Jones' daughter said. "I had to keep checking for a pulse." Jones was pronounced dead at 4:51 a.m. at Loretto Hospital.

At a press conference held on Sunday, members of Jones' and LeGrier's families wore shirts saying "Rahm Failed Us" to convey anger at Chicago Mayor Rahm Emanuel's leadership over the embattled city. Her nephew, community leader Jahmal Cole, spoke for the family. "She should not have had to open her door and be shot down by a Chicago police officer ... We need compassion for life in the city of Chicago." Emanuel, who is currently on vacation with his family in Cuba, released a statement saying "Anytime an officer uses force the public deserves answers, and regardless of the circumstances we all grieve anytime there is a loss of life in our city."

Little information about the officer responsible for the shooting has been released at this time, only that he or she has already been placed on administrative duty for 30 days by the department so that routine "training and fitness for duty requirements can be conducted." This is the first fatal shooting by Chicago police since the video of Laquan McDonald's death was released to the public last month.

Jones' death has sparked new heat to the national debate about police violence and gun safety. These violent and tragic deaths may have long reaching consequences and inspire change in a mourning city.