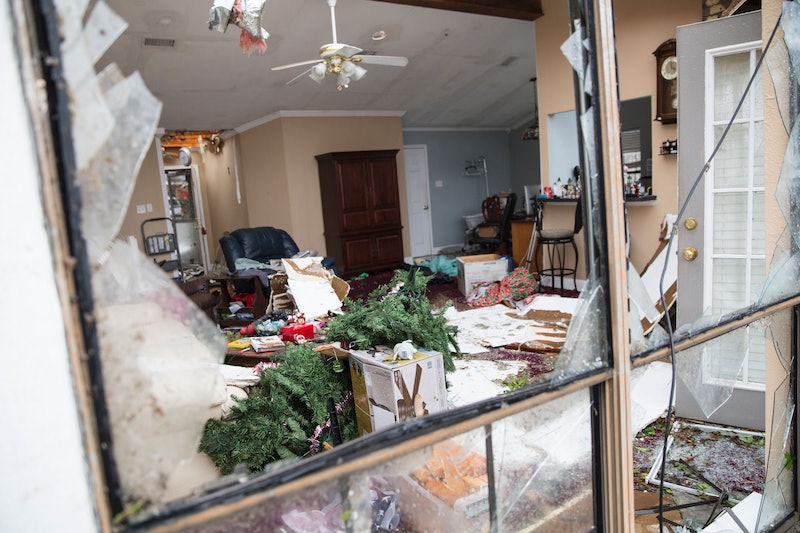 The last few days of 2015 have been marked by several outbreaks of severe weather across the country that seems straight out of an apocalypse movie. The weather didn't break for the Christmas holiday, as tornadoes destroyed homes in Texas, Mississippi, and Tennessee, and floods ravaged Illinois and Missouri. The Associated Press reported that so far 43 people are confirmed dead from severe weather over the weekend — 11 in Texas, five in Illinois, seven in Missouri, and 19 across the Southeast.

Social media has proven a huge help so far in advocating for victims of the destructive weather. One Texas college student raised $320 through Twitter and Venmo to buy pizzas for tornado victims in the Dallas area, while a post trying to reconnect a dog found in Garland, Texas with its owner has almost 70,000 shares on Facebook.

If your home has been affected by the storms, check out this testimonial posted on Facebook by a survivor of the 2011 Joplin, Missouri, tornado on how to begin moving forward. If you want to help, the Red Cross has established shelters throughout the affected area to support displaced people — you can text "REDCROSS" to 90909, or donate online to direct your donation to the Dallas-Fort Worth area. You can also donate online to The Colbert Project, a local charity that works closely with area firefighters that is collecting items to support first responders and victims.

Here's a look at all the crazy — and sometimes devastating — weather events that have been happening across the country this week.

Houston shattered its record high temperatures on Christmas Day — the previous high minimum temperature of 67 was changed to 73, and the former record high of 82 was broken by one degree at 83. New York City also had the warmest Christmas Eve and Christmas on record this year. Across the country, high temperatures caused by the El Niño system contributed to the unpredictable and dangerous weather that's claimed at least 36 lives in the past week.

Perhaps the most bizarre weather in the storm system is the massive blizzard that's dumping over 18 inches of snow in parts of Texas, Oklahoma, and New Mexico throughout Sunday and into Monday. New Mexico Gov. Susana Martinez has declared a state of emergency due to the two feet of snow that has already been reported in parts of the state, and snow drifts of up to 10 feet have been reported in Western Texas. Wind speeds of 55 miles per hour and sub-zero wind chills mean residents throughout the Texas Panhandle are urged to stay indoors and hunker down through the storm.

Eleven tornadoes touched down in the Dallas area Saturday night, causing 11 fatalities and at least as 15 injuries throughout several towns. In the city of Garland, Texas, at least 600 structures, mostly homes, were damaged by the EF-4 tornado that had wind speeds of up to 175 miles per hour, according to Garland Police Department Lt. Pedro Barineau.

But this wasn't the only devastating system of tornadoes this month. Last week, as many as 18 people were killed by tornado-producing storms in parts of Mississippi, Tennessee, Alabama, and Arkansas. Greg Flynn, spokesman for Mississippi Emergency Management Agency, stated that 403 homes across seven counties were destroyed by a single tornado. In total, there were around 25 tornadoes that touched down throughout Wednesday, Thursday, and Friday.

Flooding has followed many of the storms and emerged in other parts of the country as well. Oklahoma Gov. Mary Fallin declared a state of emergency for the blizzard in the western reaches of the state and the flooding in the eastern region, and heavy rains are expected in Dallas for the next several hours. In the Midwest, six people were confirmed dead by flash flooding in Missouri on Saturday night, according to Pulaski County Sheriff Ron Long. A family of five in southern Illinois was killed when their car was swept into a flooded creek, and 50 homes were destroyed by floods in Monroe County, Mississippi, which got up to 12 inches of rain on Friday.

The severe weather isn't over yet, as the blizzard and heavy rains are expected to last at least through Monday. But the recovery process has already begun in some parts of the country, and many families are beginning to heal from their devastating holiday weekend.

More like this
The 6 Best UV Umbrellas, According To A Dermatologist
By Rachael Green
The 8 Best Indoor Door Mats For Your Home
By Jenny White
The Best Fans That Blow Cold Air
By Andrea Hannah
7 Things We Learned From Rebekah Vardy's First Post-WAGatha Christie Interview
By Sam Ramsden
Get Even More From Bustle — Sign Up For The Newsletter