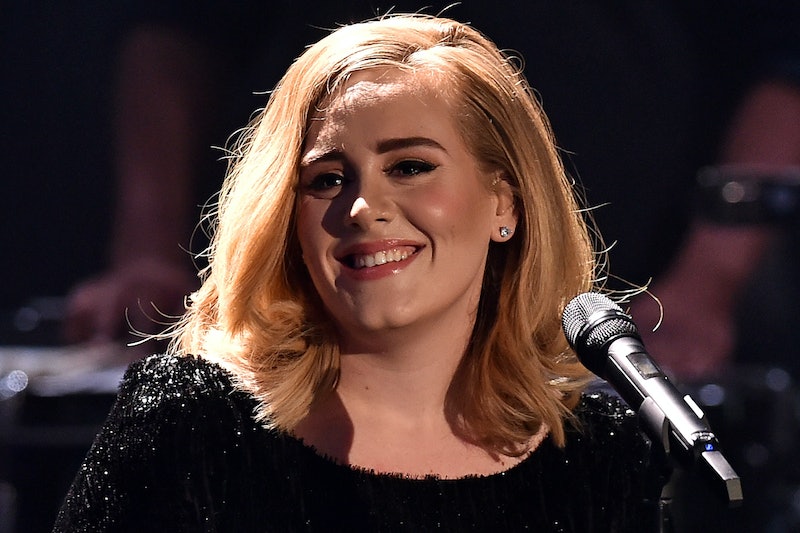 Have you heard the good news? Adele is still blowing everyone's minds on the regular, so much so that her album is selling like hot cakes. Actually, I might make that phrase "Selling like Adele albums" rather than hotcakes, because let me tell you, people cannot get them fast enough (or at all). According to Billboard, Adele's 25 has sold more than 7 million copies so far – and it did so in only five weeks. I have barely moved from couch in five weeks, so I'm not sure I can understand that type of success, but I sure can be in awe of it.

Billboard affords some credit to the crazy sales to the holiday season, but they do also point out that, "25 also easily earns a fifth straight week at No. 1 on the Billboard 200 albums chart, with 1.19 million equivalent album units." So, holiday season or not, the powerhouse singer was probably going to reach this point, anyway. Not that I was doubting her, and I'm sure you weren't either, for that matter.

So, here are 7 million GIFs — JK, I enjoy having eyes and fingers, both of which would surely disintegrate if I cultivated that many moving pictures off the internet — Ahem, here are nine GIFs to celebrate Adele's latest triumph.

2. Letting It All Sink In

Just give her a minute.

3. Basking In The Glory

4. Boasting A Bit, Because She's Earned It

But still maintaining that humble way she has about her.

5. Sending A Message To The Haters

Honestly though, are there any?

6. Taking A Minute To Be A Hipster In Reference To Her Own Music

She liked it before it was cool, guys.

7. Explaining The Range Of Emotions Over Something Like This

Cutting a rug is the best way to celebrate, in my humble opinion.

Because an accomplishment of this magnitude is giving me all the feels.