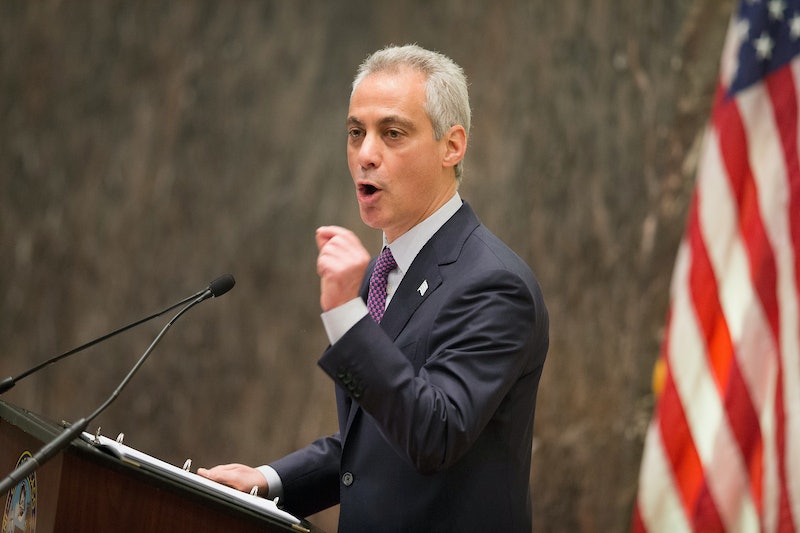 Rahm Emanuel was able to become Chicago's mayor in 2011 in part because black voters knew that President Obama trusted him, his former chief of staff. But Rahm Emanuel's mayorship has been a slippery slope. In 2013, Emanuel oversaw the closing of nearly 50 public schools, many of which were located in predominantly black and Latino neighborhoods. As a result, he clashed with public school teachers and set off teachers' strikes. He has also come under fire for struggling to decrease rates of gang violence in the city. And now, still in the first year of his second term, Emanuel is once again at the center of controversy.

Last month, a dash cam video was released showing a white Chicago police officer firing 16 shots at and ultimately killing a 17-year-old black man, Laquan McDonald. Following the release of the video, Emanuel publicly apologized in front of the City Council and pledged to institute more reforms. Since then, he has fired his police superintendent, met with the Justice Department as they investigate the Chicago Police Department, and appointed a task force to recommend changes to the CPD. But organizers across the city have escalated demands for his resignation, as well as that of Cook County State's Attorney Anita Alvarez. Just last week, demonstrators supplied thousands of signatures to back these demands during a Christmas Eve demonstration downtown.

But thus far, Emanuel has not been swayed: "We have a process called the election," he said at a Politico-sponsored event earlier this month. "The voters spoke. I'll be held accountable for the decisions and actions that I make."

What with the fatal shootings of 19-year-old Quintonio LeGrier and 55-year-old Bettie Jones by Chicago police in the early hours of Saturday morning, the scrutiny Emanuel has been facing these past few years has only intensified. Earlier this month, Emanuel said he will not heed calls to resign, but the problems he has been struggling with are not going to go away. Before leaving for a family vacation in Cuba, Emanuel reportedly conferred with advisers, communicated with allies on the City Council, visited local police stations, and met with African American leaders in the city. One of these leaders, the Rev. Marshall E. Hatch, spoke to The New York Times about the discussion he had with the mayor on Dec. 8.

These meetings are an indication of how much scrambling he's doing. I think he was trying to reach out, but he was awkward. He seemed in his regular campaign mode. Like whatever we were saying he should do, he's saying he's already doing it. ... The problem for the mayor is that this isn't going away. Every shooting, every unpopular decision, it's all going to be very problematic for him.

Earlier this year, the tensions confronting the city of Chicago pushed Emanuel into a runoff election with Jesus "Chuy" Garcia, who aimed to become the city's first Latino mayor. Garcia built a campaign on holding himself accountable to voters, so when Emanuel finally won reelection, he promised that he would do the same by bringing voters' concerns into office. But his second term has already been complicated. He enacted a significant property tax increase — the largest in the city's history — and on top of the Laquan McDonald video, Emanuel has also had to contend with The Guardian's investigation of the CPD detention center Homan Square, police torture reparations hearings, and hunger strikes to force the reopening of Dyett High School on the city's Southeast Side.

Emanuel will not be able to escape demands for his resignation unless he tackles the issues of police brutality and systemic racism immediately and directly. He has pledged to do this, and he has already taken steps to institute policy changes to this end, but as the Rev. Michael Pfleger told The New York Times, it will take the mayor a long time and a great deal of effort — as well as evidence of substantial change — to regain the city's trust.