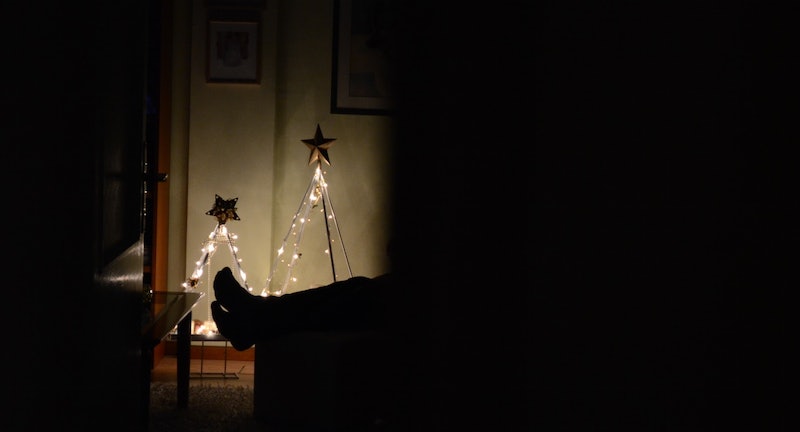 It's the post-Christmas, post-Hanukkah, post-general-stuffing-oneself period, and the new year and the return to work are looming. And, unsurprisingly, one response to this less twinkly and sugary time of the year is a widespread bout of misery — the post-holiday blues, as they're called. Psychologically, it's a mixed bag of crashing after a period of intense emotion and stress, the body recovering from indulgence, adjustment to the return to work, and the easy-to-understand sadness that comes when the good times are over. But getting into the nitty-gritty of our brains as they recover from the ho-ho-hoing can help us drag ourselves through the bleakness of January.

When you were a kid — and if you still have a seriously stressful holiday period as an adult, whether it's down to travel, irascible relatives, or lunatic children — the crash is likely at least partially to do with adrenalin comedown. After the stress "rush" of the holidays, where stress and anticipation kick your body into high gear, a post-adrenalin period in which stress hormones withdraw may cause you to feel a bit under the weather and depressed. But that's only one side of the equation.

If you're feeling deeply down now that the Christmas tree needs to be thrown out, the decorations packed up and new tights bought for the return to work, take heart: psychology's got you covered to make it all a bit better. Here's what you need to know about the post-holiday blues — and how to make them better.

1. It's Common, But Not Serious

Psychologists have a basic consensus about post-holiday blues: they're not serious depression, but they do seem to be widely felt. Some call it "post-vacation syndrome," which combines feelings of irritability and difficulty concentrating after time off from work. The return to the workplace appears to be a big trigger, particularly because the effects of a relaxing holiday period don't seem to last all that long: a BBC study found that 76 percent of British workers thought their stress levels rocketed back up to pre-holiday highs within a week of getting back into the work groove.

2. It's Known As "The Contrast Effect"

The big factor in post-holiday blues is a simple psychological problem known as the contrast effect, where the brain has to adjust between radically different experiences. The amped-up expectations of the holiday period giving way to the less exciting post-vacation weeks are a classic contrast effect. It makes us perceive the post-Christmas period as far more depressing and boring than it actually is. The brain's just exaggerating; you aren't actually doomed.

Interestingly, there is actually a psychological "equation" developed by scientists to determine how likely you are to get depression when you return to work after a vacation. Manchester Metropolitan University put in various factors, from how often you get holidays to how much you like your job and whether your travel was difficult, and came up with an algorithm that pin-pointed pretty accurately whether you might get the blues. (It's (j + c) x (r + t) – (h + o) divided by b, in case you were wondering; you can calculate it yourself.)

If you're already inclined toward depression, the post-holiday blues will be particularly acute, but another factor that may be contributing is your body's sensitivity to winter lack of sunlight. Seasonal affective disorder, or SAD, hits a large proportion of people in countries where colder weather means a lack of access to sunlight (a key part in the body's production of serotonin); up to 1 in 6 people may suffer from it.

The SAD part of post-holiday sadness may actually be easier to fix; special lamps that mimic the sun's rays are available for sufferers to bask in for limited times per day.

4. It's Also Your Relief In Letting Your "Character Armor" Slip

Part of the psychological let-down of the post-holiday period, according to some psychologists, is that it's the result of considerable effort over the course of holiday dinners to look perky, perfect, and unassailable.

Psych Central notes that the psychotherapist Richard O’Connor has a particular theory about how we "arm" ourselves over the holidays. "Most people put on their character armor a little tighter at this time of year and do everything they can to get through a stressful time," he says, "then allow themselves to fall apart a little bit afterwards.” We are, according to this theory, prone to putting on masks during high-intensity times where we interact with family, and letting the mask slip afterwards gives us that depressive "low".

5. Toxic Relatives Contribute To The Blues

If you have toxic parents, siblings, or members of your family, you may expect to come out of a period spending time with them elated, because you got through it. However, the reality is often not as peppy. For those with toxicity in their families, the post-holiday period is often a time where they review how badly people acted (throwing plates, getting drunk, being horrendously passive-aggressive), and that contributes to their low mood.

Psychologists point out that the disappointment after a toxic holiday can temper the relief of surviving it, particularly because the holiday season is so full of expectations of perfect families and relationships. If you'd hoped this year would be different, if you'd tried to set heathy boundaries or not let your mom get to you, the letdown is powerful. Even for people who have ordinary, imperfect families, this experience of sky-high expectations being failed can be powerfully saddening.

The holiday period tends to be full of sugary and unhealthy foods, whether you're a die-hard Christmas fan or you just attend a lot of holiday parties with canapés piled on every tray. The problem is that sugary foods have been linked to lower mood, so the pile-on of desserts may actually have contributed to your depression. Sugar crashes make us irritable and tired, and sugary foods cause more bodily inflammation and a less healthy immune system. Most of us are willing to shoulder that for the sake of one more bite of cake, though.

7. It Can Be Cured By Setting Goals And Energy Boosts

Fixing post-holiday blues is partially a matter of adjusting expectations, and partially about physically managing the symptoms. Combatting the contrast effect by packing the future full of exciting activities and new goals for the future can be an effective psychological fight-back. One recommended technique is to set yourself audacious targets that get you excited for the coming year, like learning to wind-surf or mastering Russian. It combats the psychological perspective that this time is lesser-than by filling it with future-oriented cheerful thinking. (Perhaps this is why we make New Years resolutions?)

Another is to make sure you give yourself energy in the short term, rather than laying around feeling sorry for yourself: taking walks at lunchtime, enrolling in a new exercise class, eating a proper breakfast, adopting a shelter dog and running it around the park. Then you can join in with the smug hordes of New Years Resolution-istas with the comforting knowledge that you're likely far less insufferable than they are.