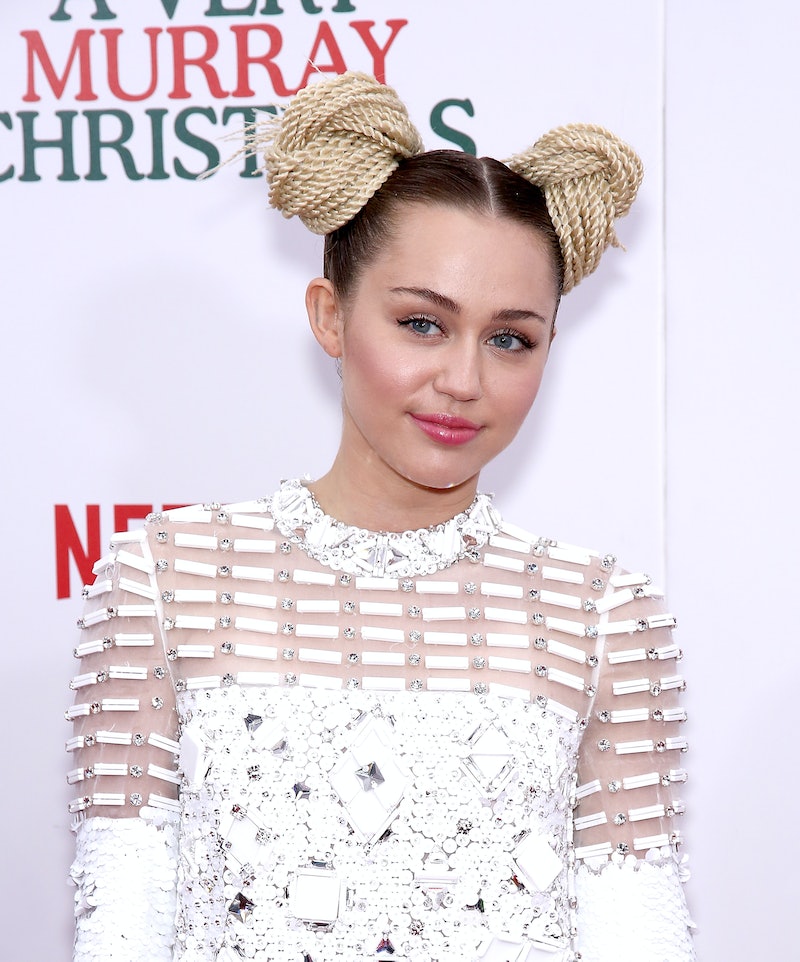 It's bangs for the queen of the Bangerz. In a year that has seen her rock a dizzying variety of hairstyles, from dreadlocks to braided buns to wigs and more, Miley Cyrus has bangs... for now. In fact, pop music's wild child is rocking a lob-like 'do, as well. She has had her super short pixie for over three years now, yet the singer continues to play with extensions, wigs, and overall cray cray looks.

Her short style is easily one of the most versatile in Hollywood because she has switched things up, rocking everything from a platinum faux hawk to a Lil Kim-inspired purple wig over the years.

While Cyrus keeps things intriguing when it comes to her coif, this side fringe looks like it could be her real follicles.

It has me wondering if Cyrus, who wore quite a few memorable ugly Christmas sweaters this season, is growing out her short hair in favor of something longer in 2016. You never know, since she seems unwilling to commit to anything but living and loving outside of the box, a concept for which I certainly adore her.

Are you ready, willing, and able to see Cyrus with her ombre bangs and a lob? It's almost... normal! At least for her.

Check her out with bangz.

The sideswept swoop showed up in this no makeup snap with her mom Tish, taken just before Christmas.

She rocked braided, rainbow dreads on her Dead Petz tour.

This look was MIA for so long, because she had such super short strands.

She has been growing out her real hair for a minute. This was the mullet stage.

Pink bangs via a wig.

She was so hard to keep up with, due to all these hair changes.

She could communicate with life on other planets, thanks to those braided buns.

She was all about that length.

This was her retro x punk rock look.

She had the blues at the Met Gala.

She hasn't rocked the true pixie in a while...

This was one of her most simple yet most glam looks of 2015 — slicked back and blonde.

She started off the year with her spunky, short, and sexy coif.

Cyrus always keeps things unpredictable with her follicles. I can't wait to see what she pumps in 2016.

BTW, her faux hawks from 2013 were always my fave short Cyrus coifs.