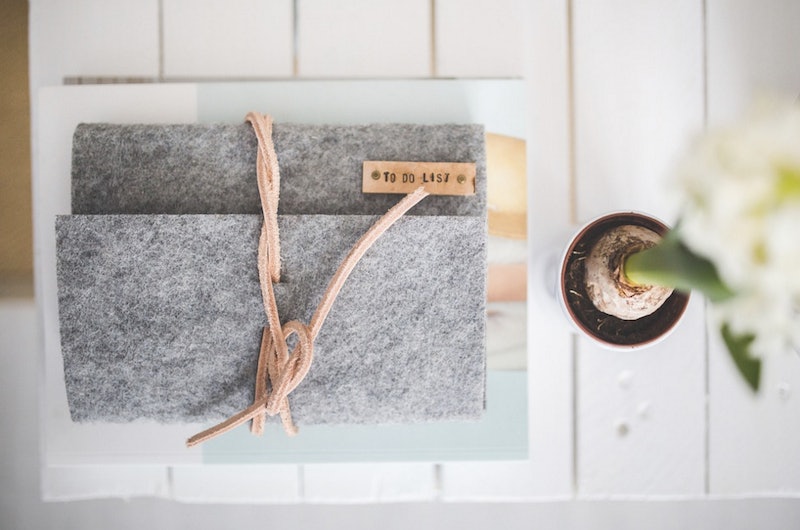 It can be a tough pill to swallow when you've finally decided to declutter your life. We all like our hoarder tendencies — we might not think we have any, but when you take stock of all the knick-knacks, memorabilia, and random closet clutter we hold on to for no reason season after season, it can get pretty alarming. But how, exactly, do you make yourself throw away that old picture frame you made in the third grade? Or the box of photo booth pictures you literally never, ever look at? Or how about that pair of jeans you hate but that cost way too much money, or that questionable scarf your best friend got you but you feel guilty throwing out? Some things are super hard to part with, but if you don't start clearing some of it away you'll be stuck underneath a heap big enough that TLC will invite you onto your own episode.

And nobody wants that. So how do you make the super intimidating task of decluttering your apartment or room a little less intimidating? Easy: You start small and need to be honest. Like every step of the way. Ready? Below are seven steps on how to declutter your life and throw old stuff out — good luck!

Thinking about decluttering your whole life could be enough to steer someone into a nervous breakdown. Instead, start tiny and vow to just clear any unnecessary belongings in there and there only. As Vanessa Hayes, professional organizer and blogger at Get Simplifized recommended, "Pick a small area to work on like a drawer, a shelf, a cabinet, one spot on the kitchen counter, one filing drawer."

When you're doing it just one drawer or box at a time, not only do you cut down on purger's remorse (which happens when you get into a frenzy and toss too much out) but it also seems completely doable. For example, tossing that one old teddy bear in that one old box seems necessary, but having to come face to face with letting go most of your childhood memories crammed into your closet seems undoable. Baby steps!

A lot of the time we hold onto old junk because we think of how much we spent on it when we bought it. That's why old sweaters, ugly denim jackets, and never-worn-and-never-will-be-worn boots hang on: Because good money was blown on it. But in reality, what is their actual worth now? Chances are, not even a second-hand store will give you the price of a drip-coffee for it.

Lifestyle writer Erin Rooney Doland told Real Simple, "A hefty chuck of what I moved into our home was obsolete computer equipment. When I looked at it, I saw dollar signs. Then my economist friend, Stephen, reminded me of the fallacy of sunk costs. I was sizing up those old computers based on what I had spent rather than their present value: close to zero." Don't think about how much you spent on it years back; assess its value today and watch the guilt float away as you toss it into a donation bag.

3. Remember It's OK To Throw Out Bad Gifts

A lot of the times we hold on to terrible gifts we'll never display or wear just because we worry the gifter will randomly ask to see it. But, um, when does that actually ever happen?

Doland pointed out, "My decorating tastes may change over time, but I am fairly certain I will never enjoy a home filled with a series of rhinestone-accented paintings of scary clowns...I wasn't sure what I would say if someone noticed his gift missing and asked why. Well, you know what? No one has. Not even the bestower of scary clowns." If you're OK keeping it hidden in the back of the closet, you should be OK stuffing it into a donation box.

Sometimes you need to ask yourself a few choice questions to allow yourself to toss a box of sentimental knick-knacks or long-hoarded items. A couple biggies are "Will I wear this tomorrow?" and "Will I want to display this in the living room?" If the answers to something like that are no, then it's gotta go.

Real Simple offered, "When you're stuck about whether to keep or divest, ask yourself: What's significant about this object? Does it have genuine, lasting emotional value? Do I like it enough to display it, or will it be in a box forever? Would it be more valuable to someone else?" If you realize you're no longer attached to a memory or that someone else might find more enjoyment in it than you will, it'll be so much easier to toss.

5. Be Honest About How Much You Really Need It

How many times have you bought a coat that was kind of what you wanted, but not really? Or you bought something because it was on sale, but it wasn't quite what you needed? If something doesn't fit your needs but it's rolling around your house because, meh, it kind of does the trick, toss it.

Doland highlighted, "Often what we need is only related to the thing we have. For instance, I had a huge popcorn maker but could easily pop the modest amount of corn we consumed in a small pot on the stove. Out it went." You might feel like you'll regret tossing it but, remember, you probably won't remember you even owned it three days from now.

Here's a huge one: If you're on a mission to declutter, put yourself on a spending freeze. You're going to go absolutely nowhere if you keep throwing stuff out only to replace it with a shinier, newer version. Minimalism blogger Colleen Madsen wrote for Becoming Minimalist, "Decluttering is a waste of time if you simply replace the old stuff with new. You’ll need to begin by slowing the flow of things entering your home." Resist any new clothes, gadgets, or home decor until you paired down your home to the size you want it to be.

7. Consider How Much Enjoyment These Objects Are Giving You

We all have that heap of clutter in the back of the closet or rolling around in drawers that stick around because we have some sort of attachment to it, whether it's from sentimentality or a point of loyalty. But if you find yourself just shuffling them from one box to another, not really actively enjoying their memory, then it's time to admit that it's more burden than love.

According to Real Simple, "Every year or so, take a hard look at what you've kept in the name of love, and toss or donate anything that's become more of a burden than a sweet-memory trigger."

If you follow these seven easy tips, you'll get to de-hoarding in no time. Just remember: Ask the hard questions and get to trimming!