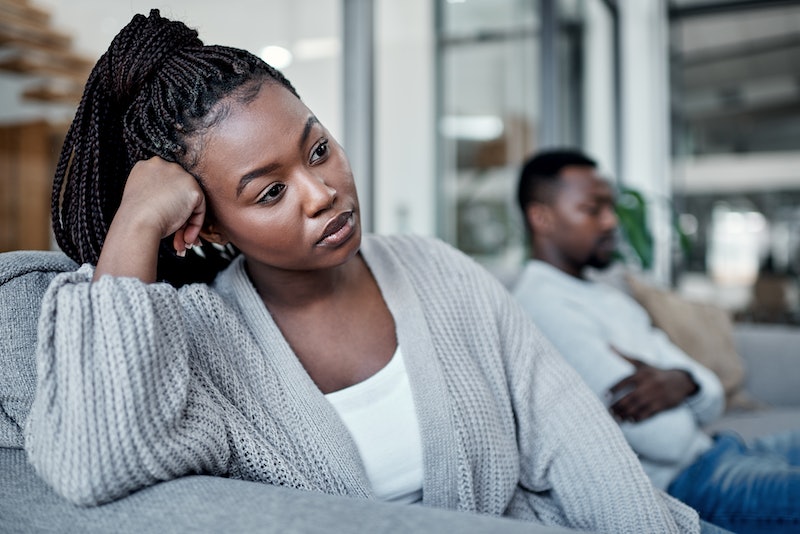 I'm a people pleaser who comes from a long line of people pleasers. We don't fight. And we certainly don't ever disagree with our partners without feeling like giant jerks. We just silently seethe. Sometimes for years. Disagreeing with someone to their face is more uncomfortable than the gyno's stirrups or running into your ex after some super awkward drunk texts. Better to walk across hot lava.

Unfortunately, that is a practice that has not served me well in the adult world of healthy relationships. And as I gained experience, both in my own relationships, and in my careers working with couples as both a former Domestic Violence Victim Advocate and Planned Parenthood Certified Responsible Sexuality Educator, I learned that the disagreements, although uncomfortable, are actually good. Well, when done right. They help solve problems and they can bring you closer. But you have to be able to disagree in a healthy way.

And there are ways to do it without feeling like a jerk or making your partner feel like one. They take work and practice, and a lot of that work and practice is uncomfortable, but if you're really in love, it's the kind of necessary hard work that long-term relationships require.

Here are some pointers to help cool things off the next time they get heated, so you can get past the argument faster and move on to the make up sex.

"I" statements are basically a life-saver when you're trying to keep your inner jerk in it's box. They take the problem and reframe it so that you're expressing your own feelings instead of blaming or criticizing. For example, instead of saying "You are a giant slob and I can't stand living with you sometimes," you would say "When you don't clean up after yourself, I feel overwhelmed and it makes it hard for me to relax in our home." Or, instead of saying "You always spend all of our money on stupid crap we don't need," you would say "When you spend our money without talking to me about it first, it makes me feel like you don't value my opinion, and it makes me worry and stress about our bills." Expressing your feelings makes it more about your happiness and less about what they're doing to upset you.

2. Be Assertive, Not Aggressive

We often confuse assertive with aggressive during conflict. Part of us feels like we need to tell others what's up and not let them get away with their crap. What we end up doing is aggressively telling them about themselves in our meanest tone, which just makes them defensive and angry. Assertive behavior, however, isn't mean. It's direct and honest. It's standing firm when you say "I don't like this" and it's talking things out when they happen in a direct way without being passive-aggressive, wishy-washy, whiny or mean. Remember, you can have a backbone without using it to stab someone in heart.

3. Go To Your Corners

If you get mean and defensive (or seethingly silent) when conflict happens, you may be one of those people who needs your space until you calm down, figure out exactly what made you so upset, and gain the ability to talk about it without starting a fire with your hot side-eye beams. It's OK to ask for space, especially when it helps avoid unnecessary conflict. If you're an in-the-moment, hot-headed arguer (especially if you're a mean one) practice taking a time out before you talk about things. Don't confuse this with stewing on your anger. Your goal is to get calm enough to find a solution, not fuel the argument.

4. Hear Your Partner Out

If you want to be heard, you have to listen, too. Hearing your partner's side of the story fills in the gaps so that you get the whole picture and not just the pieces that make you want to throw dishes at the ground. Maybe your partner misunderstood something, or had genuinely good intentions, or operated from a place of kindness and unselfishness. Maybe there were outside factors that he or she had little control over. Maybe you didn't realize the way they felt and now you get it. You gotta have all the facts and you won't get them unless you speak and listen.

5. Find What Sucks The Least

One of the crappiest things about adulting is that arguments and conflict aren't about winning anymore. They're about finding actual solutions. And sometimes the best solutions are compromises that make you both a little bit happy and a little bit miserable. That's just how it works. You can't have it your way all the time, and neither can your partner. So if you just can't get past an issue and you're tired of continually coming back to it, find a compromise somehow, and agree to move on. Does it suck? Yes. But thems the breaks. Just make sure you're both doing your fair share of the bending.

6. Pause For An Ego Check

Why do you care so much about this issue that you've gotten to full-blown conflict mode? Is it something incredibly important to you? If so, proceed. If not, ask yourself what you're doing. It's OK to admit that you just got caught up in the argument and you're not really sure why. Do you really think your way is the best thing for your future as a couple, or are you just on a power trip, or a crusade to be right? Do you just have a deep need to not be wrong again? Ugh. You gotta swallow your pride on this one. Because sometimes, in the grand scheme of life, it's just not worth it to max out your blood pressure over something trivial.

Fighting it out isn't a terrible thing. When conflict stews and tempers flare, sometimes you just have to yell at each other to get mad enough to say all the things you were hesitant to say before. However, there are a few key things to try to keep in mind when there's no other option but to fight it out. First, name calling will get you nowhere except a blanket fort on the couch as your new home. Second, sometimes you need to hear harsh truths, as much as much as you need to yell them. And they hurt. They hurt especially bad when they come from your love. So try your best to keep it above the belt and to take it as well as you dish it out. There's probably some truth to both sides of the story.

Whether you're a people pleaser who doesn't like conflict or you're a hot-tempered fighter who loves a good argument, making sure you're trying to be kind and understanding will take you far.

More like this
25 Inspiring Quotes From Black Women To Celebrate Black History Month
By Kyli Rodriguez-Cayro and JR Thorpe
21 Galentine’s Day Memes To Celebrate Your Best Friends
By Meghan Bassett and Mia Mercado
23 Super Sweet Things To Write In A Valentine's Day Card
By Karen Belz and Lexi Inks
Here’s What TikTok's "Mascara” Trend Is *Really* About
By El Hunt
Get Even More From Bustle — Sign Up For The Newsletter
From hair trends to relationship advice, our daily newsletter has everything you need to sound like a person who’s on TikTok, even if you aren’t.